As huge fans of Stanley Kubrick’s 2001: A Space Odyssey, and monoliths in general, we were thoroughly excited about the prospects of aliens, or at least monkeys, being responsible for those two mysterious monoliths recently discovered in Utah and Romania. Alas, just as Occam posited, the simplest explanation appears to be the correct one.

In disappointing news, a group of real life human environmentalists removed the Utah structure from the Red Rock desert, seemingly in the name of not littering. Instagrammer/TikToker sylvanslacks posted a video of the monolith heist, along with the caption: “Don’t abandon your personal property on public land if you don’t want it to be taken out ??‍♂️ #utahmonolith #leavenotrace”

Technically, it’s not really a heist at all, as according to the San Juan County Sheriff's Office (per ABC News) there’s no ongoing investigation into the placement or removal of the monolith, since no one has thus far claimed ownership. Granted, the Bureau of Land Management (BLM) is investigating who put the monolith there in the first place, since installing any object on public land without permission is most definitely illegal.

Regardless of legality, witnesses were reportedly shocked on Friday around 8:30 p.m., when a group of four men walked onto the sacred site, said nothing to anyone, committed the world’s greatest pseudo monolith heist, and walked right back out.

"We were shell shocked. We were like, 'Holy smokes,'" one of the hikers, Mike Newlands, told ABC News. "It was like watching an Internet meme die in real life." 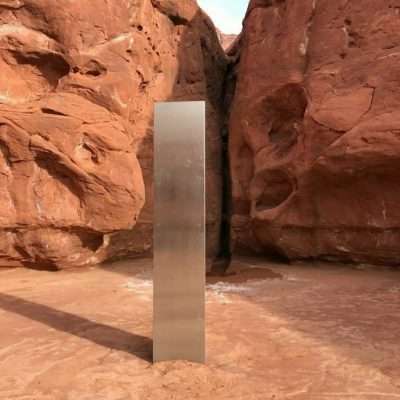 According to the report, Newland was among a “score” of hikers who had travelled to Utah since the 10-12 foot metal structure first appeared in the desert on Nov. 18. And it sounds like the crowd wasn’t a very cleanly bunch. BLM officials noted that visitors to the remote spot didn’t exactly pack it in and pack it out, as the old adage implores. So you can see how the #leavenotrace crowd took action.

Granted, an anti-littering stance doesn’t exactly explain the exciting twist in the story of the Romanian monolith, which on Tuesday also went poof and disappeared from an archaeological site that dates back to the second century B.C.

Though mysteries still abound, we can probably safely assume that anything that can be so easily removed by humans, was also likely built by them. We’re still holding out hope for monkeys, though, if not aliens.

It's a fan thing
Join SYFY Insider to get access to exclusive videos and interviews, breaking news, sweepstakes, and more!
Sign Up for Free
All Posts About
News
Science
2001: A Space Odyssey
Mystery
aliens
monolith
Related Stories

What is this weird 2001-like metal monolith spotted in the Utah desert?

Seriously?! Mystery monolith No. 3 pops up (and then disappears) in California