Watchmen, Westworld, and how sci-fi uses drugs to expand perception

Depictions of a dystopian society often feature drugs, which have a variety of purposes that include escaping oppressive day-to-day living, a way for those in power to control the masses, and a method for railing against conformity. A range of science-fiction stories beyond dystopia feature illicit substances — even Star Wars has contraband — and this has long been a method of adding an element of recognizable power dynamics (see Dune). The beauty of genre is pretty much anything is possible, and expanding the mind of the character via a synthetic or even natural compound is one factor. Similarly, it also gives the filmmaker a chance to play with form whether via animation, sound design, or flipping a familiar device on its head.

The X-Files, Stranger Things, and Marvel's Agents of S.H.I.E.L.D. are just some of the science fiction TV shows to reference Project MKUltra as part of the narrative. Officially sanctioned by the CIA in 1953, it was a mind control program that used lysergic acid diethylamide — aka LSD or acid — as an interrogation method, among other techniques and often without participant knowledge. First made by Dr. Albert Hofmann in 1938 (he discovered the hallucinogenic effects in 1943), psychotherapy has in the past used acid "as a treatment for alcoholism, as well as for anxiety and depression in people with advanced-stage cancer." If this is how semi-synthetic compound drugs factor into the real world of science, medicine, and espionage, it is no surprise that storytellers turn to fictitious medicinal and/or recreational substance to expand, elevate or add to the plot.

"The Extraordinary Being" is the sixth episode of Damon Lindelof's HBO Watchmen adaptation. The limited series is one of 2019's most impressive TV shows and this particular outing is one of the year's best (if not the best). Lindelof is no stranger to a flashback sequence — Lost was structured around the flashback format — but he took this to new heights in an episode co-written with Cord Jefferson, and directed by Stephen Williams. Angela Abar (Regina King), up to this point, has not been privy to her family history, including the Minutemen identity of her grandfather, Will Reeves (Louis Gossett Jr). Rather than a campfire rendition of his life, Angela instead finds out exactly who he is after she ingests a bottle of Nostalgia, which has been prescribed to him (and only him).

Before she can get arrested for her role in protecting a wanted killer, Angela chugs enough pills to kill her. Luckily, all that happens is she ends up going on an enlightening (and deeply traumatic) trip, detailing how the past and present are entwined. In the Watchmen TV adaptation, Nostalgia has changed from cosmetics created by Adrian Veidt's company in the graphic novel to a medication manufactured by Trieu Pharmaceuticals to treat dementia, anxiety, and psychic trauma — some of the same things LSD has been used for. A user decides which memories are stored in the tablets and they are specifically matched to that person's brain chemistry, which is why it is strongly advised that another person does not ingest the medication. However, as with most drugs, there is are elements of abuse and misuse, which have led to psychosis, and even death. So when Angela takes all of Will's pills, those around her know the severity of this action.

It is not good for her psyche or heart, but in terms of storytelling, the merging of Will with his granddaughter takes the viewer on a singular flashback experience. A predominantly black and white palette — with the odd streak of pivotal red and other tones — indicates we are watching Angela's Nostalgia version of these personal events. Scenes feature both Regina King and Jovan Adepo (who plays younger Will Reeves) within this framework, sometimes using rapid cuts between the actors to blur our and their points of view. So much of Watchmen's backstory is laid out in Alan Moore and Dave Gibbons' text, but the identity of Hooded Justice has always been a mystery. Instead of the white man suspected to be under this disguise, Reeves used white makeup to give that impression.

A survivor of the 1921 Tulsa Race Massacre and a former cop who endured a vicious racist attack at the hands of his co-workers, he knows the power of perception and prejudice. The audience sees this lynching through Will and Angela's eyes simultaneously while she is on Nostalgia, depicting how Hooded Justice was born while linking Angela's experience to her grandfather — both personally and as a wider examination of inherited trauma and systematic racism. This twist on the flashback structure via the use of Nostalgia allows the writers to draw links to the source material, while adding a layer to the backstory focusing on the racial injustices of the past and the present. This deep wound has not healed; the actions Will endured throughout his career are still very much an issue nearly 100 years later in Angela's (and Will's) American life — and reflect the actions of police brutality and institutionalized racism in 2020.

Flipping the script in a more superfluous fashion, the playground of the rich and privileged in Westworld demonstrates a disconnect from the reality most people live in. The first two seasons focused on the park activities and the huge amounts of cash people will splurge on these unique experiences, in which power is a weapon wielded. Out in the real world, oppression is rife with the affluent turning to alternate realities straight out of a movie in the choice of drugs. Instead of memories, Genre lets you experience life as if was a specific story as a form of elevated escape. A wealthy party substance, Liam Dempsey Jr. (John Gallagher Jr.) injects the designer drug into Caleb Nichols (Aaron Paul) neck in a bid to escape from his captors. Caleb is former military and has already had his mind scrambled, so this new plane of reality is a hindrance but one is equipped to deal with.

Genre takes the user on a trip through cinematic storytelling frameworks, which takes a page from Watchmen's style book with a black and white segment. Using a Film Noir lens, Delores (Evan Rachel Wood) is the femme fatale of Caleb's story taking him on a dangerous adventure. She has already taken him on a path littered with bullets so this isn't too much of a stretch, but it does suggest he might be falling for her. This episode is named after the drug, but rather than taking on an overt visual nod, the switch cues are done via songs that link to particular movies.

War is next on the schedule (something he has experience in), which kicks off with "Ride of the Valkyries" — an iconic Apocalypse Now needle drop — before flipping to heart eyes for Delores via the treacly piano theme from Love Story. The '70s influence is felt throughout with the wonderfully sleazy 1977 track "Nightclubbing" by Iggy Pop taking Caleb into the Crime Thriller portion of his experience (this song appeared in Trainspotting). Reality breaks it up, or so his friend suggests, but the beautiful Ramin Djawadi cover of David Bowie's "Space Oddity" suggests this still Genre tapping into his perception with a dash of Sci-Fi. "You gotta be careful with that last act," Caleb is warned and it seems his closing segment is Horror. Featuring The Shining score, everything begins to unravel as it did for the Torrance family when they went to stay at the Overlook Hotel. Waking the hell up, Caleb's memories are partially unlocked to reveal a truth he probably wishes he could bury again.

Mind-altering substances in dystopian settings can set a person free, but they also act as a prison. In some cases, this is a way for a person to try and escape the daily grind of existence. Slo-mo, which slows time down to one percent of its usual speed in the 2012 Judge Dredd movie Dredd, is one recent example of a psychedelic addictive substance. This far from a new concept; Aldous Huxley used a drug prescribed by the government to create a pain-free society in Brave New World. Soma appears to be without drawbacks, however, by putting people into this permanent state of joy means they can be controlled with ease. 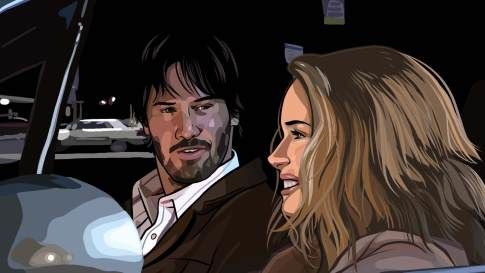 Meanwhile, Philip K. Dick's 1977 novel A Scanner Darkly was adapted to the screen by Richard Linklater in 2006 using a technique that wasn't just a case of animation. Instead, he shot the actors digitally before using an interpolated rotoscope to animated the images. It is a trippy experience to view, which matches the drug addiction and surveillance state of the material. In this dystopian future, Dick envisioned an America that had lost the so-called war on drugs with 20 percent of the population addicted to Substance D (aka Slow Death). Again, this is an inventive use of form to portray a story dominated by a hallucinogenic substance.

Literature is the source of the most potent drugs in science fiction. Sometimes these compounds are created in a lab, but as with real mind-altering substances, they can also be found in nature. Melange (or "spice") can increase awareness while delivering a great high, but the drug at the heart of Dune is so powerful in high doses, it can bend the fabric of time and space. Mined on the desert planet of Arrakis and guarded by deadly giant worms, there is a reason those in charge of this supply are so powerful. Drugs can bring down an empire or control a galaxy. On a far smaller scale in A Clockwork Orange, the innocent-sounding "milk plus" (aka Moloko Plus) is a cocktail that turns the child-friendly beverage into a terrifying combination, thanks to the addition of barbiturates, opiates or synthetic mescaline. Some people like a happy hour drink, but Alex (Malcolm McDowell) and his droogs choose this laced milk-based option for when they want a "bit of the old ultraviolence."

Most of the substances that come from fiction were written in and around the mid-century period, when LSD was discovered. This development coming at the same time as these stories could be a coincidence, but the pattern is there for all to see.

Both "The Extraordinary Being" and "Genre" episodes of Watchmen and Westworld continue this long-standing tradition of using a world-specific compound to alter perception and expand the story. Caleb's experience opens up something within him that has been buried deep, whereas Angela finds out how far back this racist operation has impacted her family while discovering her grandfather's vigilante superhero secret. The latter is one of the most affecting episodes of TV from the last decade. In each case, the audience is taken on a trip without the added worry of landing in the wrong genre, or the potential for OD-ing on someone else's memories. Science fiction has long turned to mind-bending substances to say something bigger about society and the lengths consumers will go to in order to forget (or in some cases, remember), and in 2020, this notion is more potent than ever.

The dysfunctional sex of Watchmen