Since the first teaser trailer, sartorial expectations for Birds of Prey have been set at high. The explosion of color, sequins, and jackets made out of streamers and crime scene tape is exactly the kind of style statement we expect from Harley Quinn. Not only that, but this particular aesthetic is highly covetable: Who doesn't want a pair of gold pants in their closet? Harley's unique fashion sense has been evident since her comic book debut in 1992, which has evolved over the years from jester chic to garments that will brighten up any wardrobe.

The big Suicide Squad fashion moment came courtesy of Harley, which introduced the world to the tiniest sequin shorts and a very popular baseball tee that ensured fans could emulate this character at any comic-con. Birds of Prey does pay homage to that particular shirt, but costume designer Erin Benach takes Harley's multiple changes to the next level. And while the gold dungarees and winged disco streamer jacket dominate the posters and promotional images, there are many more sequin-infused garments to drool over in the movie. Breakups can lead to a desire to reinvent, and what better way to do it than with your clothing choices?

Recreating looks from movies isn't always the easiest endeavor for several notable reasons. The time lag between filming and release means any item that was bought off the rack will probably be unavailable. Fast fashion and high-end garments only have a certain shelf life online and in brick-and-mortar stores, which is why eBay and consignment sites — such as threadUP and the RealReal — could result in a Harley Quinn treasure trove success.

Knowing what the specific items are is the first part of this outfit scavenger hunt, which is where SYFY FANGRRLS comes in! We have found a variety of items as worn by Margot Robbie in Birds of Prey, as well as sourcing some alternatives that are currently still available — Dress Like Margot was also a huge help for those last few hard-to-identify items.

Benach told Fashionista that she took inspiration from "street and current fashion because it seemed right for this film." Brands including Isabel Marant are included among the custom garments, as well as more affordable labels such as This Is A Love Song and Cape Robbin. The mix of high with low is reflective of how a lot of people shop: paying a little bit more for investment pieces to wear with (sadly) more disposable fashion.

For that true Harley look, she has never met a sequin she doesn't want to wear, and she isn't afraid of adding her own indelible mark to punch up T-shirt or jacket to make it her own. Below you will find copies and alternatives to the best of Harley Quinn's Birds of Prey costumes, but for full cosplay alternatives, Etsy is a gold mine. For the streamer jacket, gold overalls, hot pink cropped top, and orange suspender desires, this is a one-stop shop.

The gold overalls are the focal point of the Birds of Prey epic fight sequence, but Harley's metallic Isabel Marant leather pants that she wears in the final scene are pure rockstar chic. They are last season, but can be sourced from Paris via the Isabel Marant boutique in New York City. Costing several month's rent and sold out online (time to hit the consignment stores!), we have come up with a few alternatives. On the higher end of the budget — because we know Harley has expensive taste — Saint Laurent is serving up disco athleisure in a bronze hue effect. Harley's all about the high-waist silhouette, which is where ALEXACHUNG comes to play, and on the leather end of the splurge scale, Karen Millen has got you covered. Harley wears a silver pair of sequin pants earlier in the movie, but in gold, there is IRO and Free People for those sparkly disco fever days. On the more affordable end, give ASOS a sequined whirl, and American Apparel's survival delivers a leggings option.

One of the funniest moments in Birds of Prey comes courtesy of a shoe change, and while we don't have any roller skate options, Harley's ankle boots throughout are perfect for stomping around Gotham City. Before the aforementioned switch, Harley pairs gold boots with her instantly iconic overalls. This could be considered a bit too matchy-matchy, but she's never been bothered by cutesy conventions. We don't have an ID on the actual boots, but we do have some solid alternatives at various price points. For the '80s disco flashback, Salvatore Ferragamo is here for those dancing days, Marsèll has a unique take on this style, and the chunky heeled Charlotte Olympia boots are Harley-adjacent.

The pair that get the most screen time shows up on-screen as part of her police station storming attire, as Harley opts for the Isabel Marant white leather Cuban heel cowboy boots, which you can snap up at the Isabel Marant boutique on the Upper East Side. The metal-tipped toes add a dash of edge while also being useful for a fight sequence. She clearly loves this style, as she also wears the ruched leather Isabel Marant booties for her night out at Roman's club. Available alternatives can be found at Topshop, MSGM, and a discounted Isabel Marant style resembling Harley's favorites. And to add some Harley fringe, check out this super affordable vegan Lemon Drop by Privileged offering. 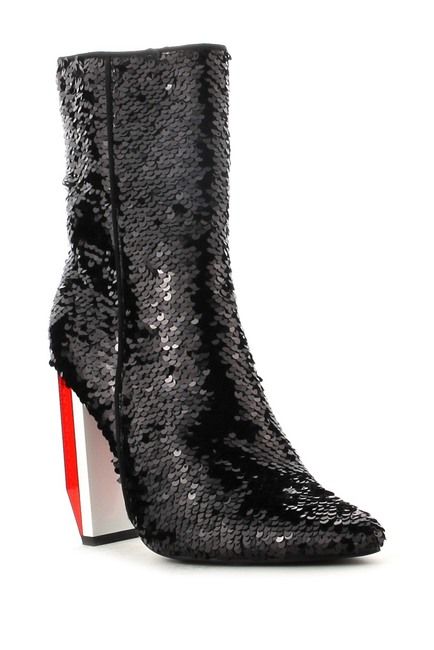 Harley ditched her impractical Suicide Squad stilettos, but the similar clear mesh style she wears in Birds of Prey — all the better for seeing her sequined socks — are still on sale at United Nude. And while we're discussing sequins, she also favors the affordable Cape Robbin black sequined boots that were also sold in green and gold variations. We're cursing the day these sold out, because they tick so many fabulous Harley style boxes.

Harley's choice of bodysuits add starry and flame glitz to her look, which includes the handmade Alexia Hentsch tulle and velvet star number — still available to purchase. Less bank-draining alternatives can be found at Dolls Kill and ASOS. The flame Current Mood number is sold out, but how about a bolt of lightning instead for roller derby?

Starting at the end, the custom Di$count Universe embellished blue jacket is a striking way to close out the movie. This "Revenge" jacket by the brand is very much in Harley's wheelhouse. For other mixed textures and patterns that scream Harley Quinn, Alice + Olivia bring the sequins.

A large part of her jacket collection embraces all things sparkly in varying lengths and styles. The holiday season is peak sequin shopping time, so stores are currently selling a lot of these items on discount — although, as Harley proves, sequins should not be held back for one particular time of year. The duster style coat she wears while drinking up a storm is a belted midi Attico dress with a teal velvet back, which is a fabulous twist on fancy evening wear. You can do the same with this We Are Leone silver shiny delight. For something shorter and more affordable, River Island combines sequins with fringe, and H&M is leaning into the larger sequins and silver.

The hot pink cropped top is as eye-catching as Harley's gold overalls, but it is a GCDS Spring '19 swimsuit that is connected by clips. The pink version has sold out, but you can still purchase it in black (and maybe add a touch of Harley DIY via patches). Alternatively, Hot Topic has licensed a version of the Harley ensemble complete with signature diamonds.

Hot pink is Harley's favored undergarment shade, as she also wears a This Is a Love Song bikini top under her sheer star bodysuit. The key for these fuchsia tops is leaning into sports attire or underwear, such as this Calvin Klein bralette.

L.A.-based streetwear brand Joyrich has created an official capsule line for Nordstrom taking elements of Harley's style in a range of tees and hoodies. The white shirt with her name emblazoned all over it — taking inspiration from the Balenciaga logo shirt — is the most notable item and a steal at $40. Wear your Harley loyalty with ease.

No one has a better accessories game in this squad than Harley, and she's not afraid to go big with her choice of glasses, gloves, socks, and jewelry. This is not an afterthought. All of Harley's many pieces of hardware are custom-made, but jewelry designer Billie Valentine has released a limited-edition collection of pieces inspired by and featuring in Birds of Prey. As of writing this, the signature Harley charm necklace is still available, and you can also purchase these signature replicas at Nordstrom.

Also handmade and available to purchase are Harley's opera-length leather gloves from the prison breakout sequence. Leather brand Uncuffed explains the concept as "This bold style was designed around the idea of sisterhood, with female leather hand appliques clutching the glove in a show of support." Perfect for Harley and you!

Dressing like Harley from head to toe is possible, and finishing off an outfit wearing ASOS sequin socks will ensure your feet are dazzling.

It's a fan thing
Join SYFY Insider to get access to exclusive videos and interviews, breaking news, sweepstakes, and more!
Sign Up for Free
All Posts About
Fangrrls
Movies
Birds of Prey
Birds of Prey (And The Fantabulous Emancipation of One Harley Quinn)
Geekouture
Related Stories

The many looks of Harley Quinn

Why Joe's baseball cap is the perfect disguise on You