Noah Hawley's Alien TV series and Star Trek film are currently on pause, the Fargo showrunner revealed during a recent chat with Deadline.

"I know that there’s an effort to reshuffle a lot of things post-Disney takeover [of 20th Century Fox] and it was a conversation that I had a couple years back. And I have not in the last few weeks been having those conversations about it," he said about the Alien project. "But I know that like any studio that there’s a great desire to make the most of one’s library so I wouldn’t be surprised to see something like that."

Hawley's pitch for the small screen effort was to apply the same grounded approach he used on Legion. "Let’s take the Alien out of the show," he explained. "What’s the show about? What are the themes, who are the characters and what is the human drama? Then we drop the aliens back in and we go, ‘This is great. Not only is there great human drama, but there’s aliens!’"

His Star Trek movie, which has been in flux for months, also remains in limbo.

"It doesn’t appear to be in my immediate future," the writer added. "I think when [Emma Watts, head of film at Paramount] came in, she took a look at the franchise and wanted to go in a different direction with it. But you know, life is long, we were very close to production but in this business that doesn’t mean much. You got to get out of the gate to be in the race if you know what I mean."

Hawley's vision for the feature reportedly centered around a virus that wipes out a large portion of the universe's inhabitants. As SYFY WIRE wrote back in August, the studio probably wasn't raring to make such a movie in the time of an actual pandemic.

In addition, Hawley is working on a small adaptation of Cat's Cradle by Kurt Vonnegut. Swiss Army Man directors Daniel Scheinert and Daniel Kwan are currently attached to helm the project.

"We’re bringing on showrunners now to develop it. I’m hoping that will move to a new home in the near future," he said.

Ashley Eckstein and Rosario Dawson, the two actresses who have now played Ahsoka Tano, came togeher on Instagram over the weekend to celebrate the beloved Star Wars character. Eckstein (the founder of Her Universe), who voiced the Togruta Jedi in the world of animation for Star Wars: The Clone Wars and Rebels, shared a lengthy post, acknowledging the character's live-action debut in Season 2 of The Mandalorian (where she is played by Dawson).

"Millions of people are meeting Ahsoka for the first time after watching her in The Mandalorian and I’m excited for them to hopefully go back and watch her journey in The Clone Wars and Rebels. Millions of fans already know Ahsoka and her presence has come to mean more to them than words in a script," she wrote. "It’s my wish that Ahsoka continues to bring people joy, light and most importantly hope. This is the way of Ahsoka Tano."

Dawson, responded with: "Thank you forever for your brilliance, Ashley!!! I’m so honored to be a part of Ahsoka’s legacy alongside you. #AhsokaLivesInAllOfUs Indeed this is the way of Ahsoka Tano. #AhsokaLives." 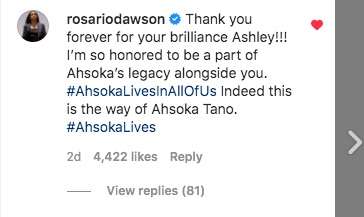 Episodes 1-5 of The Mandalorian's second season are now available to stream on Disney+.

Usually so tight-lipped when it comes to anything related to AMC's The Walking Dead, Scott Gimple confirmed that a seventh season of Fear the Walking Dead is now in development. The chief content officer for the franchise let this bit of information slip during an interview with The Hollywood Reporter.

"It was heartbreaking not to be able to carry it through to 608, just because that is an astounding episode," Gimple said. "It's such a big episode in the history of the series. It'll make an amazing start. [The series is back in production.] We've been working for many weeks now, if not months. We're cranking away on Fear the Walking Dead. We have the rest of season six to finish up while we are working on season seven."

Fear the Walking Dead will close out its sixth season in 2021 with nine episodes. According to Gimple, the long-running and lucrative IP "has never been more connected" amid the health crisis.

"The timings of the different episodes as it relates to the pandemic were interesting," he added. "With The Walking Dead, it was at a point where we could really adjust what it was imminently about to do. Fear was in the middle of its season, and World Beyond was just starting its writing [for the second and final season]. It's been interesting to see the different productions at such different places during this time, and everybody's been working with each other and learning from each other as far as techniques are concerned as we're shooting right now."