Rooster Teeth is expanding its slate of RWBY-inspired programming, the company announced in a blog post this week. In fact, three new shows set in the RWBY universe are currently coming down the pipeline, according to the property's new lead producer Laura Yates.

"You guys, especially the FIRST members who show up early and mash the refresh button on Saturday mornings, are the reason we’re able to keep building on this amazing universe every year," she wrote in the post. "Because we wouldn’t be able to keep going without the support, we want to give FIRST members more to experience between volumes, including original content and website features, as thanks for the commitment and loyalty."

The first series is a behind-the-scenes talk show (currently untitled, it arrives this spring) hosted by RWBY writer/director Kerry Shawcross. Per the official description, it "will give you more insight into how CRWBY brings the series to life each season, and what inspires them as artists."

The second spinoff is also live-action (untitled as well, it arrives later in the year) and "sees members of Rooster Teeth Animation, and probably some special guests, play through a RWBY-inspired Dungeons & Dragons campaign set in the world of Remnant.

The third project is still in the early stages, but will comprise "original RWBY fairy tales" that utilize "a new 2D, mixed media style of animation." Also slated to debut later this year, the currently nameless show is being billed as "the kind of bedtime stories that Taiyang might have read to Yang and Ruby when they were little."

Apparently, these three are just the tip of the iceberg as Yates concluded:

"Our amazing engineering team is cooking up some RWBY-specific, FIRST-exclusive account customization features for your Rooster Teeth profile that we’ll be rolling out throughout the year, some of which you’ll see this spring."

Volume 8 of the original show drops this fall.

Described as an anthological and unscripted gaming miniseries, the five-part program "brings famous DC fans together to play a variety of games in the increasingly popular gaming show genre," reads the press release.

Clare Grant, Vanessa Marshall, and Xavier Woods join Prinze Jr. and Witwer in a campaign set within DC Heroes, a post-Crisis on Infinite Earths RPG game from the mid-80s. "Five participants role-play as a group of high schoolers stuck in Saturday detention," continues the release. "As they improv their way through a variety of situations familiar to fans of beloved movies from that time period, they soon discover their destinies as the world’s greatest superheroes." 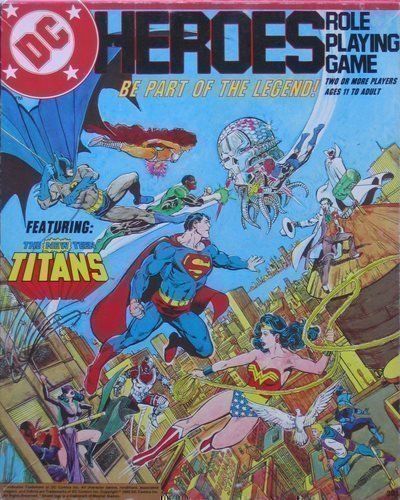 “DC Heroes was the first RPG I ever played as a kid. It was also my introduction to the DC Universe, its heroes and, most importantly, its rich pool of villains.” Prinze (who is an executive producer with Witwer) said in a statement. “I had a blast making this series and I hope all of you love it as much as I do.”

Speaking of live-action game shows, Wil Wheaton (Star Trek: The Next Generation, The Big Bang Theory) was just announced as host/commissioner for GameMaster this spring.

The reality esports series (premiering on a TBD streaming service) sees 12 amateur esports contestants from the around the country living under one roof and participating in a competition broadcast all around the world. Spanning nine episodes and more than two dozen video game titles, Wheaton will send a single player home each week. By the end, two gamers duke it out for $100,000 in cash and the honor of calling themselves "GameMaster."

“GameMaster takes the love of gaming and elevates it to a whole new level through the first immersive, multi-platform, head-to-head competition for both casual and diehard gaming fans,” said show creator and executive producer John Colp. “Our players won’t play the same game from noon-to-night. They will play different games throughout and, at the end, the person who has the best cumulative score will be crowned the champion.”

“Gaming is part of almost all of our lives, whether on consoles or computers or phones, we’re all gamers in some way,” added executive producer Laurie Lockliear. “GameMaster celebrates the joy, tech and humor that gamers love - whether you’re a professional player or you’re playing solitaire on your phone!”

Wheaton is attending SXSW next month to promote the show.

It's a fan thing
Join SYFY Insider to get access to exclusive videos and interviews, breaking news, sweepstakes, and more!
Sign Up for Free
All Posts About
Movies
News
TV
DC Universe
Freddie Prinze Jr.
RWBY
Sam Witwer
WIRE Buzz
Wil Wheaton
You May Also Like
Recommended by Zergnet
Latest on SYFY WIRE