There's a scene about halfway through 2011's Ghost Rider: Spirit of Vengeance, where Nicolas Cage's Johnny Blaze is sitting on the back of a moving tow-truck, fixing up his motorcycle, and chatting with a young Danny Ketch. Blaze, as his fire-skulled alter-ego, the Ghost Rider, has just saved Danny from the clutches of a nefarious gang, led by Danny's mom's ex-boyfriend, funded by the devil and armed with the finest illegal weaponry in all of whatever vaguely Eastern European country they're supposed to be in.

Sensing the boy's unease at discovering that he, too, is the victim of a demonic curse, and having seen his yearning for a father figure, Blaze offers his ear and his years of wisdom to Danny, should the young man want them.

The scene is a welcome slowdown in what has, up until now, largely been an amphetamine high masquerading as a ghost story, and offers a remarkably touching moment as well.

"What happens," Danny asks, "if you have to pee when you're on fire?"

"Well, it's awesome," Blaze answers. "It's like a flamethrower."

It is at this point that Nicolas Cage — and, really, Cage and his human character are completely interchangeable in this film — moves to the side of the, again, moving truck, and mimics peeing, complete with fire noises, holding his hands wider than any actual human could have ever evolved.

The audience, of course, is left to imagine what that would really look like – what the visual mechanics of Ghost Rider peeing "like a flamethrower" would actually constitute – because there's no way a major motion picture would ever divert any amount of actual funds to actually animating …

Yep. That's Ghost Rider, the brooding, demon-possessed stuntman with the ability to turn a person's sins against them and make them feel the pain of their victims, urinating fire to entertain a child. In the context of the film, it seems to work; Danny laughs. The boy's dour mood is lifted.

But what about us, the audience? Maybe we, the people watching Ghost Rider emptying his flame-bladder, feel a little like we're intruding —like maybe we weren't meant to see this undoubtedly brimstone-scented bathroom behavior. Not to worry, folks: the man with the flaming skull turns and gives an over-the-shoulder head nod to the audience at the end. Like it's no big thing. Like he wants us to watch.

It is a weird moment, to be sure. A WTF Moment in a movie that traffics almost entirely in WTF Moments. Ghost Rider has already, in literally the ten minutes before the fire-peeing scene, vomited molten bullets onto a goon and possessed a building-sized piece of mining equipment, laughing like an actual, literal dolphin as he swings the flaming bucket excavator around. Ten minutes in the other direction, and the Rider will vomit chains and get his face pulled off. Somewhere else in there is a whole sequence of Nic Cage mugging like Bruce Campbell in the Evil Dead movies and sporadically snorting flames as his face falls away.

But, still, even with all that, a supernatural superhero urinating fire? That, my friends, is something special. And you can be damn sure the filmmakers knew it, too, because this is not the only time the fire-pee scene is included in the movie.

We're treated to the scene again, later, when the devil — Rourke, according to the script — is attempting to explain his failing meat-sack to a kidnapped Danny, using the very specific metaphor of his being a "flamethrower made of papier-mâché," too powerful for his current human vessel.

Of course, all Danny hears is the word "flamethrower." He starts laughing and we, the audience, are once more treated to a scene of our titular Spirit of Vengeance forcefully eliminating a mighty arc of flaming urine into a black void.

But that's not all: they put it in the trailer, you guys.

How did we get here? How, in the second installment of a burgeoning Marvel film franchise — released after Iron Man and Thor and Captain America: The First Avenger, and just months before The Avengers — did we end up with a CGI Nicolas Cage gleefully urinating flames?

I could make the argument that the Danny Ketch in Spirit of Vengeance is just a kid, and kids love toilet humor, and Johnny Blaze did what he did because he was trying to make him feel better. The repeat performance, meanwhile, occurs when this child is being interrogated by the literal devil, and, so, because it was the only time Danny laughed in the entire movie, of course he'd try to return to that moment when he's facing evil incarnate. He's comforting himself. In fact, I could argue that the entire "Ghost Rider peeing fire" scene is actually a commentary on children and trauma and innocence lost, a metaphor for our crumbling global society.

Because this movie also features two car chases in the first ten minutes, numerous animated flashbacks (including one of Blaze's bare ass), a decay-powered supervillain eating a Twinkie, Idris Elba turning to ash and headbutting the same supervillain in the face, Danny running up Blaze's chest and literally screaming fire into Nic Cage's face, Nic Cage running around with his face on fire, and that's before all of it culminates in Ghost Rider wrapping Rourke with chains and literally throwing the devil back to Hell.

Ghost Rider: Spirit of Vengeance knows exactly what it is: a Ghost Rider movie starring Nicolas Cage and directed by (one of ) the guys from Crank. That was all it ever needed. It understood and leaned into every word of that sentence and became a frenetically insane cinematic masterpiece.

Don't believe me? What's the ultimate mark of a good comic book movie? Having some of those ideas reverse-engineered into the comics. And that fire-peeing scene? They made it Marvel Comics canon in Thanos Legacy #1. 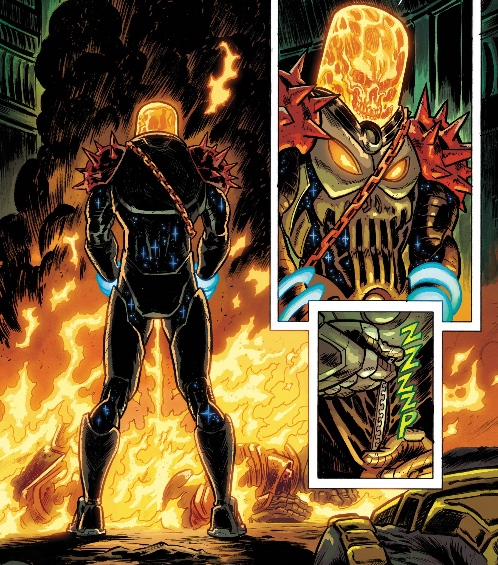 And after enduring so many critics throwing Ghost Rider: Spirit of Vengeance into the toilet, I'm sure seeing their golden moment recognized thusly left the filmmakers feeling pretty ... relieved.