Creators behind DC's 'Static: Season One' promise a 'different story' with relaunch of iconic Milestone hero

Vita Ayala wasn't interested in adding to their current comics workload, but then Milestone came calling, and the writer of books like Children of the Atom and The Wilds couldn't turn down an opportunity to work with one of the most influential Black comics characters ever.

"It is really hard and it is really stressful but it's also, for me, I couldn't not do it," Ayala told a group of journalists, including SYFY WIRE, earlier this week. "I promised myself that I was not going to do any more, take on more work, because I'm just tired. And then the universe was like, 'But what about this though?' And I was asked to pitch on it. I was like, 'How do you not do that? How do you say 'No,' to Static?' I grew up with that."

Next week, Ayala and artists ChrisCross (a Milestone Comics original who drew work like Blood Syndicate for the publisher) and Nikolas Draper-Ivey will lead the way to a new version of the Milestone Universe with Static: Season One, a new series that reinvents the title character for a 2021 audience and sets Milestone on a path that, in the coming months, will also include relaunches of titles starring other heroes like Rocket and Icon. For both Ayala and Draper-Ivey, working on the series was the fulfillment not just of a professional dream, but a personal one, something Draper-Ivey said he feels acutely every time he sits down to work on the book.

"There's no other way to put it. It's very, very hard," Draper-Ivey said. "I wouldn't put anybody else in this seat right now. I wouldn't wish this on somebody. 'Hey, fill in for these shoes.' Everyone says they want to do it. Everyone says, 'Oh I could do it, I could do it.' But I say this to people that are fans of this, and people that hear this or see this: It's all well and good to be a fan of this. It is a completely different feeling when you are in the seat. Suddenly it becomes way more. It's not just: 'Oh yeah, I'm just drawing Static,' you'll wake up every day and you're like, 'Yeah!' It's a heavy feeling."

Ayala added, "But I mean: Virgil Hawkins, come on. You got to do it, you got to do it. Even if it's hard, you got to do it. I think it's an honor. We were chosen to do this. [Original Milestone creators Reggie Hudlin and Denys Cowan] were involved in that process and they looked at what we said we had to offer and they said, 'Okay. Get it done.' And that is an incredible feeling. I don't know how to process that. I'll process that after it's done. Yeah, [Static] means as much to me as he does to anyone else that I know, so it's awesome."

After debuting as part of the Milestone Comics line in 1993, Virgil Hawkins, aka Static, quickly became a fan-favorite character, and seven years later spawned the hit animated series Static Shock that propelled him up out of comics and into a wider mass media fandom. Nearly 30 years after his creation, the teen superhero with the power to manipulate electromagnetic energy remains an iconic figure among teen superheroes, Black superheroes, and beyond. So, following the announcement that Milestone Comics would return and the release of a preliminary Milestone Returns one-shot last year, Static felt like the logical next stop in relaunching the universe.

With the character primed for a triumphant return, it fell to Ayala, ChrisCross, and Draper-Ivey to reinvent him for a modern audience while retaining the attitude that made Static so popular in the first place.

"I'm a huge, huge fan of the original series. All of it actually, all of the comics, the TV show, all of that kind of stuff. And I wanted to take him and put him into our context," Ayala said. "What does it mean to be that kind of character -- this funny, slightly annoying but in a cute way, really, really smart black kid -- in 2020, 2021? How do you survive and keep that optimism and keep the heroic nature? I think for me he's an incredibly heroic character because he sees all of this terrible stuff and he's like, 'I want to make it better for the people around me right now.' It's not like this higher order, like, 'I'm going to save the earth,' it's like, 'I'm going to save my block.' So that was important to me to bring that forward into the context of more contemporary time."

That contemporary context begins in Milestone Returns with a reinvention of "The Big Bang," the event that gives many of Milestone's heroes their super powers. The Milestone Returns version begins when police use experimental chemicals to gas a crowd in the midst of a police brutality protest. The chemicals kill many of the people in attendance while imbuing others, including Virgil, with strange new powers. Static: Season One picks up in the aftermath of The Big Bang, as Virgil is both just beginning to understand his gifts and still trying to process the trauma of the event.

"When we see him when it starts, he's not happy. He's gone through this incredible trauma and I wanted to find a balance between those two things," Ayala said. "He's angry and he's sad and he's scared. He literally just watched his classmates die horrible deaths. And now he just is an electric ball sometimes. I could not handle that. But also he's the kid that plays video games and reads superhero comics and all this kind of stuff. So for me I had to find a way to synthesize those two things to make it feel real."

With that contemporary feeling, of course, also comes a sense of "standing on the shoulders of giants," as Ayala put it, some of whom are working directly on the book and the broader Milestone relaunch. ChrisCross worked on layouts for Static: Season One and left finishes to Draper-Ivey, who also noted he was in regular contact with Static co-creator Denys Cowan about everything from character designs to coloring choices. The result is a comic that features many familiar features of classic Static stories -- from Virgil's powers to key members of his supporting cast -- while also pushing the character and his world in a new direction.

"There comes a point where you have to realize that you are telling a different story, you're doing your own thing," Draper-Ivey said. "You're not your predecessors. You have to have respect for them and reverence for them and all of that, but in the end, ultimately, you have to try to make it your own. So I think that's what Vita and I are trying to focus on." 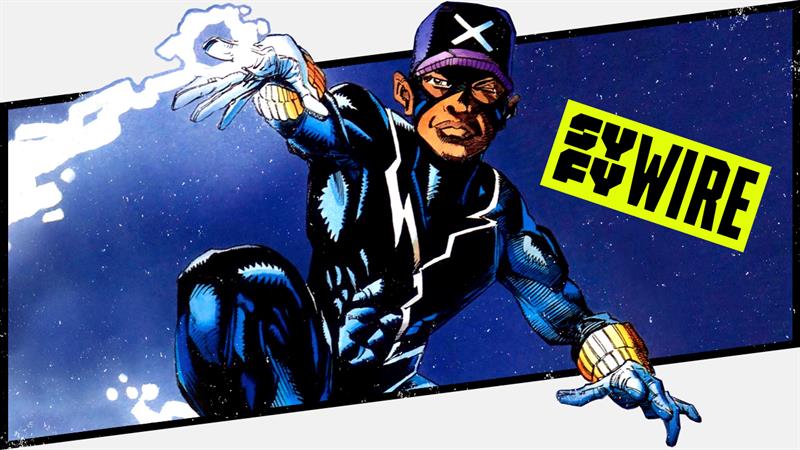