Long-standing astronomical mystery solved! Albireo is NOT a binary star

One of my all-time favorite stars in the whole sky is Albireo. It marks the head of the swan in the constellation Cygnus, one of the bigger and brighter constellations in the northern sky. Cygnus is also called the Northern Cross, since the five brightest stars form an obvious T shape. Albireo is the bottom of the cross (swans have long necks, so ironically the "leg" at the bottom of the cross would be the neck at the top of the swan), and is given the designation Beta Cygni.

The reason Albireo is such a favorite of mine is that by eye it looks like one star, but even with a small telescope it resolves into two. That's pretty common, actually, but what sets Albireo apart is the colors of the stars: The brighter of the two (called Albireo A or Beta Cyg A) is a yellowish-red, while the fainter (Albireo/Beta Cyg B) is a striking sapphire blue. In short exposures, they shine like magnificent jewels, and even by eye in a 'scope the contrast is stunning. That's why, in the summer months, it's one of the first objects I observe at night, especially if there are other folks with me who have never seen it. It's fun to hear them gasp and then try to describe the colors.

… but there's more. The two stars are so close together in the sky that you have to wonder if they're physically associated with one another. It seems unlikely to have two bright stars so close to one another in the sky by chance, but measurements of their distance put them both over 300 light years from Earth; at that distance their separation implies a very wide binary with an orbit that would have to be measured in tens of thousands of years! Neither supposition seems satisfactory.

So, we have a mystery! Is Albireo a binary system, with two stars physically orbiting each other, or are they what we call a visual (or optical) double, two stars that are at different distances that happen to align in the sky by coincidence?

This question has bugged me literally for decades, ever since I first read about Albireo and started observing it when I was in high school. It's bugged other astronomers, too; a letter to the Royal Astronomical Society of Canada by an astronomer defends the idea it's a binary, while it's not hard to find other articles that cast doubt on that.

So which is it?

I am very pleased to be able to say that we now have a fairly definitive answer. The two stars making up Albireo are not physically associated. It's a visual double, not a binary.

A wide-angle view of the constellation of Cygnus, the swan, also called the Northern Cross. Albireo is the star to the lower right at the base of the cross (the head of the swan). Credit: Tom Wildoner

The answer comes via Gaia, a European Space Agency astronomical spacecraft. This incredible mission is mapping the sky with amazing precision, measuring the location on the sky, the motion across the sky, and the colors of over a billion stars. This is important! As the Earth orbits the Sun, our viewing angle on stars changes very subtly, and we see this reflected in the sky as stars making teeny tiny ellipses over the course of a year. This motion is called parallax, and can be used to find the distances to the stars! I describe this in detail in "Crash Course Astronomy: Distances." 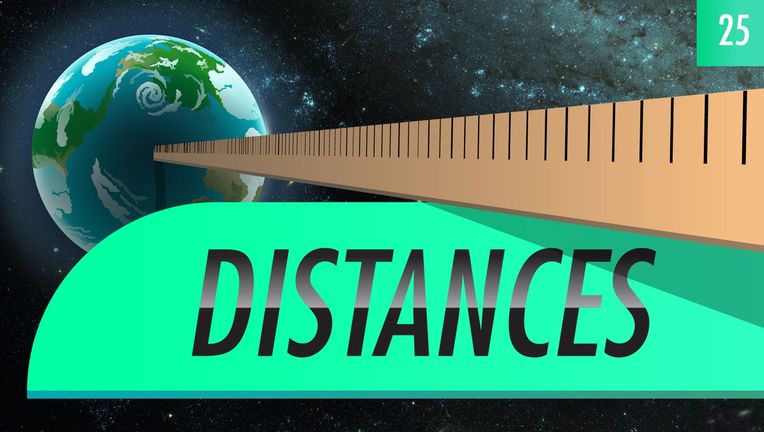 Querying the Gaia database for the two stars, I find that Albireo A (the brighter red star) is 328 light years from Earth, while Albireo B (the fainter blue star) is 389 light years away.

Case closed, right? 70 light years is a tremendous distance, so they can't be physically associated.

But wait! It turns out that Albireo A is bright enough that Gaia has a hard time nailing down its position, and the parallax measurement has a rather large uncertainty to it. Without going into the messy math details, it looks like the parallax for star A is not statistically different enough from that of star B by a quite high enough amount. Star A could easily be much closer to the distance of star B! The parallax isn't a clincher*.

What does nail it down are the motions of the two stars on the sky. As stars orbit our galaxy, they appear to very slowly move across the sky over time. This is called proper motion, and although it's small, Gaia is easily sensitive enough to measure it for Albireo.

Another view of the visual double star Albireo in Cygnus. Credit: Tom Wildoner

If in fact the two stars are physically bound, orbiting each other, they should have the same proper motion across the sky, since they'd be moving together through space (at their separation, any motion due to their mutual orbit would be incredibly small and wouldn't affect the proper motion). And it turns out… they don't.

Star A is moving at 16.66 milliarcseconds per year south by southeast, while Star B is moving at 1.13 mas/yr west by southwest**. The uncertainties in the measurements are relatively small compared to the motion, so I'm confident in saying they're moving in two different directions at two different speeds, and therefore not physically bound together. Their alignment is coincidental.

I have to say, this result pleases me greatly. I mean, it would have pleased me either way! In fact, if they were moving together through space that would have been a more intriguing scientific result, since that then implies they formed together, which leads to more interesting thoughts. But now we can be reasonably sure they are but two stars that pass in the night, and it's actually rather satisfying just to know that.

But there's another reason, too. If you'll excuse the preening, it was my idea to check the Gaia results for Albireo to see if the two stars were bound in the first place. As I was drafting an article about the distance to Polaris being nailed down by Gaia, it made me think of other uses for the data. Not for big scientific progress necessarily, but just to settle some basic unanswered questions astronomer still have. Albireo sprung to mind immediately, so I tweeted about it:

[I'm also pleased I correctly predicted the uncertainty in the position for star A would be large due to its brightness.]

I immediately got a good reply from amateur astronomer Jim Hendrickson, but he hadn't looked at the proper motions or uncertainties. But then I got a reply from Ron Drimmel, an astronomer who works on the Gaia project:

He also sent me the info I needed, and helped me interpret it as well. I concur (obviously) with his conclusion.

And I have to add: This was fun! Grabbing the data, playing with the numbers, thinking about interpretations… I haven't done real astronomical observational research in a while now, so it was cool to crack my knuckles and get down into it again.

Is this an important scientific result? By itself, not really; it's certainly of interest but not groundbreaking†. But it does show that the Gaia data can answer a lot of longstanding questions astronomers have. That's the beauty of getting basic, broad-reaching, but very accurate high-quality data and then making it public. You don't know what all the uses are, but there are plenty of people out there who are more than happy to figure them out.

†I'll note that Albireo A is a red giant star, and therefore quite large (and, interestingly, itself a true binary with a smaller fainter companion very close by). Using a technique called interferometry, the actual angular size of its disk was measured to be 4.83 mas. With the new distance of 328 light years, this means the star is 72.5 million kilometers across, or 52 times the size of the Sun. That's useful to know to understand how stars evolve and die.

[Note: I originally wrote that the letter defending Albireo as a binary was to the Monthly Notices of the Royal Astronomical Society. Thanks to tar0zzz on Twitter for pointing out my error.]