For a little while near the end of Snowpiercer's first season, it seemed like the show was wrapping up its central conflict with room to spare, and that the season finale would basically just be laying the groundwork for Season 2. Then, a cliffhanger came barreling up almost literally out of nowhere, setting the stage for a very different kind of clash in the show's upcoming second season.

By the end of the season finale, Snowpiercer revealed that Mr. Wilford, the enigmatic man behind the ark train whose apparent death had been kept a secret from nearly all of the passengers, was not only still alive, but commanding a second train out to link up to Snowpiercer and seize it. It was a lot to take in, particularly considering the reveal that no less an actor than Sean Bean would be filling Wilford's shoes for Season 2.

'Make it a little more Ridley Scott': How Snowpiercer's 1,001-car train got built IRL
How children are used as a commodity in Snowpiercer

Thankfully, this conflict is all part of a grand storytelling plan. Speaking to SYFY WIRE ahead of Snowpiercer's New York Comic Con panel, showrunner Graeme Manson explained that the Wilford reveal at the end of Season 1 was a big part of the show's overall narrative for quite a while before viewers actually saw it.

"I think as the writers wrestled with the shape of the season, I think it was a fairly early flagpole that we planted down there, that would be a good cliffhanger, that another train appeared on the horizon," Manson said. "We had in our minds that that was probably Wilford. And I liked that it was a little bit similar to [Bong Joon Ho's Snowpiercer film] in that at the end of his movie, you finally get uptrain and you meet Mr. Wilford. And I liked that at the end of our first season, we finally get to the point where Layton and Melanie have gone through their battles and have become uneasy allies and essentially traded places. That difficult road that Layton has laid out for himself of building a democracy is immediately challenged by this authoritarian figure, this brutalist-looking train that comes at them over the horizon."

Much of the first season's chief conflict revolved around Andre Layton's (Daveed Diggs) struggle to liberate his friends in the tail of the train, using his skills as a detective to uncover secrets that he could leverage as part of a bid for democracy aboard Snowpiercer. Though the train's Head of Hospitality, Melanie Cavill (Jennifer Connelly), spent much of the season in apparent opposition to Layton, she eventually teamed up with him to stop a total first-class takeover of Snowpiercer that would cripple the remnants of human civilization.

Melanie, it turns out, had been holding the train together for years by helping the passengers to cling to the illusion that Wilford was in charge, and when that illusion could no longer persist, she had to find another way to preserve the train. Now, just as she's apparently found it, her old mentor is back, and after a whole season of differing perceptions about who Wilford really is, Manson and company are giving us the genuine article.

"Well, first of all, it's Sean Bean," Manson said with a laugh when asked about the character of his new villain. "And Sean is such a fun magnetic performer. I also wanted a Wilford that had a little bit of a Wonka-esque quality and Sean really brings that, but he brings it with tremendous menace and he also has a tremendous taste in clothing. So he's a really fun character, Wilford, but we were very aware that we were writing a new villain here, someone that both Melanie and Layton were going to have to face — Melanie as her old nemesis and Layton as a brand-new threat. An authoritarian threat to his fledgling democracy. So Wilford really stands in this as an authoritarian and I really like what that has done to the show politically, in terms of how our story really rubs up against the zeitgeist."

For Melanie in particular, who still hasn't seen Wilford face-to-face again by the time the first season ends, her old mentor's arrival comes with an extra layer of emotional impact, because Wilford hasn't come alone. The finale also revealed that Wilford's train, Big Alice, carried Melanie's long-lost daughter Alexandra, who's apparently been serving at the right hand of the legendary train designer as she's grown up without her mother.

"Well, first of all, we're just very lucky to have [Rowan Blanchard, who plays Alexandra] with us. It's really nice to have someone of her age next to Sean Bean and watch those two work together," Manson said. "But it's a true shock at the end of Season 1 that that's who this is and then it's going to be a tremendous shock for Melanie at the beginning of Season 2, that her daughter is alive. Not only that her daughter is alive, her daughter has been under Wilford's sway and to some degree, or to a degree that we're going to figure out, has been turned against her. So it's a terribly heartbreaking position for Melanie to step into and it also sets up Rowan's character for a real journey throughout the season, a journey of enlightenment and a journey into adulthood, really."

With the arrival of Wilford and Alexandra, the stage is set for a deeper exploration of the many dividing lines inherent in the society of Snowpiercer, and by extension the dividing lines between Snowpiercer and Big Alice. Manson promised that we'll end up seeing much more of how train life has evolved in the wake of Layton's revolution, what Wilford's arrival does to it, what Wilford's own train looks like — "Wilford's carriage is wonderful," he said — and of course what kind of conflict the great train tycoon's arrival will generate. It's not just going to be another season of battles in narrow corridors. This time around, Layton and Snowpiercer will face a different kind of challenge.

"In the first season, we had not just a war, but a revolution, and it was violent and it carried a lot of those brutal fighting of the film, which I love so much," Manson said. "Wilford's a different kind of foe for Layton. Wilford is underhanded, incredibly charismatic, he has a support on the train already, and he's incredibly strategic. So for Layton, it's a battle of wills and we did set about to create a different kind of war here. A more political war, really." 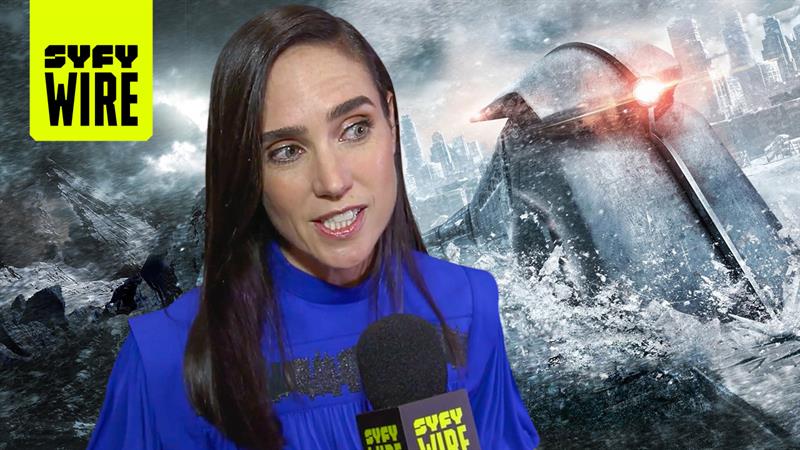