**This article originally appeared on Oxygen.com.**

Of course, he avoids using that term and instead refers to such properties as "metaphysically engaged" and "stigmatized" properties.

"A stigmatized property is one whose market value has been affected by unfortunate occurrences, tragic events associated with the property including but not limited to murder, suicide, even accidental death or the perception, real or imagined of any residual unpleasantness related to said unfortunate occurrences," he explains to a woman living in a haunted house in the show's pilot episode, which debuts on Friday, July 16 at 10 p.m. ET/PT on SYFY.

He and his team take on the sale of haunted houses that no other real estate agents want to touch, due to his ability to understand and communicate with the dead and the surreal. 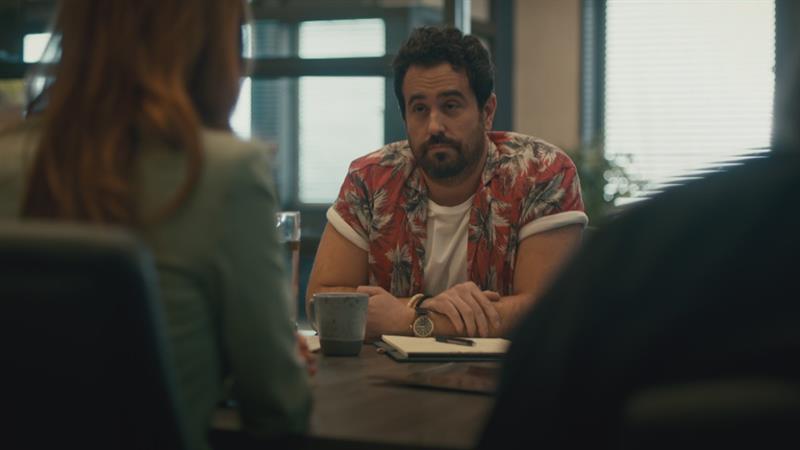 While Roman is obviously a fictional character, there do indeed exist houses that could benefit his particular brand of expertise. Here are five real-life properties in which famous crimes occurred, properties that at least some claim are indeed "metaphysically engaged."

THE HOME WHERE JUDITH BARSI WAS MURDERED

Child actor Judith Barsi — who starred in dozens of commercials, movies and shows, including Jaws IV: The Revenge and was the beloved voice of Ducky in The Land Before Time — was brutally killed in her San Fernando Valley home in 1988 at age 11 and her killing supposedly haunted the property for years. Her father József Barsi shot both her and her mother Maria Barsi to death inside the California apartment before dousing their bodies in gasoline, the Los Angeles Times reported at the time. Then, he went into the garage and took his own life with a .32-caliber pistol.

The Bernal family, who lived in the home for the past two decades, were featured on a three-part episode of Murder House Flip on Quibi last year. They didn't know about the tragedy when they bought the home, but they soon felt like they were living among a dark presence. They claimed that they felt cold spots in the house and claimed the garage door would open on its own.

"Gaby [Bernal] has slept in the same bedroom where this tragedy occurred and is desperate to rid the house of its dark energy," a synopsis for the first episode stated. She suffered from nightmares that she attributed to the murders, the New York Post reported last year.

The family enlisted the help of Murder House Flip designers and experts Joelle Uzyel and Mikel Welch to transform their home into something less ghastly. Within three days, the flippers (who bear some resemblance to Roman) gutted the child star's former room and used amethyst crystals to decorate and ease the family's worries.

"I felt bad energy here, and now it's dissipated," Gaby said in the show.

Back in 1912, an axe murderer killed Iowa couple Josiah and Sarah Moore, their four children and two visiting guests in their home. The killer was never captured or identified and it's said that the Villisca, Iowa, house is now ultra haunted. In fact, USA Today proclaims it to be one of the most haunted spots in America.

It was renovated in the 1990s and reopened as a museum to the public where people are allowed to visit to check out its supposedly metaphysical activity. Visitors can get quite the experience, according to homeowner Martha Linn.

"They play with the children, they hear voices, they get pictures of anomalies," she told Vice in 2014. "I have notebooks from just the last two years full of what overnight experiences people have had. Very few of them go away without experiencing something."

One paranormal investigator definitely experienced something.

Robert Steven Laursen Jr. stabbed himself in the chest while spending the night in the house during a "recreational paranormal investigation" with friends. His self-injury occurred at around 12:45 a.m., which is believed to be the approximate time that the 1912 murders occurred, according to Vice. He was airlifted to a hospital and survived.

Two Daily Iowan reporters spent the night at the house last year and claimed they heard the whispers of disembodied voices.

Sounds like a job for Luke Roman and his team.

New Orleans' LaLaurie Mansion is famous for an array of reasons, but they all seem to stem from its alleged haunted nature.

Marie Delphine Macarty, more commonly known as Madame LaLaurie, was a socialite and serial killer who tortured and murdered slaves in her New Orleans mansion. It's believed she killed at least 12 slaves. When a fire broke out in the home in 1834, her socialite facade fell apart after first respondents discovered bound slaves in her attic. She fled to France while a furious mob burned down her Royal Street mansion. The French Quarter property was rebuilt and now, many say, it's haunted.

"For almost 200 years, there have been reports of paranormal activity coming from this house. It shouldn't surprise many that many hauntings are attributed to the slaves that Madame LaLaurie kept on the property," Ghost City Tours claims. "There is a room in the LaLaurie Mansion where slaves were often kept - and reports of moaning coming from that room are common. Phantom footsteps echo through the house with regularity. Many people who have stood near the house have reported feeling as if they were taken over by negative energy."

LaLaurie influenced one of the characters, named Madame LaLaurie and played by Kathy Bates, in Coven, the 2014 season of American Horror Story.

This famous Long Island house has been through a lot, including a familicide in 1974. Ronald DeFeo Jr., then 23, fatally shot his parents Ronald DeFeo Sr., 43, and Louise DeFeo, 43, as well as four siblings — Dawn, 18, Allison, 13, Marc, 12, and John, 9 — at their home in Amityville, New York. Each victim was discovered face down in their beds, shot with a .35 Marlin rifle.

DeFeo Jr. was convicted on six counts of second-degree murder a year later. His motive was never really discovered. Some said it was over a life insurance policy. Others believe that it was because of a supernatural force coming from within the house. DeFeo testified that he heard voices, telling him to kill.

Thirteen months after the murders, another family, the Lutzes, purchased the house at a reasonable price. It was $80,000, discounted because of the heinous murders. However, they ended up vacating the five-bedroom home just 28 days later, blaming paranormal activity. George Lutz claimed he was forced awake at 3:15 every morning, the time the DeFeo murders occurred.

Their experience inside the home inspired the 1977 book called The Amityville Horror, authored by Jay Anson. That book, in turn, inspired a movie and numerous sequels.

The 700-room building, which opened in 1927, was once a hotspot for the rich and famous. But strange occurrences began happening almost immediately. Two years after the hotel's opening, a 33-year-old distraught woman named Dorothy Roberson wandered around the hotel for three days, after unsuccessfully trying to poison herself with prescribed barbiturates, KCET reported in 2015.

From there, the hotel became home to a series of suicides and murders. Before 1940, newspapers reported various suicides, including at least one person who took a fatal leap from the structure. Soon enough, long-term residents began referring to the building as "The Suicide," KCET reported.

The hotel's reputation as a desirable destination had dwindled toward the end of the 1940s. It was during this era that the hotel was even linked to one of Hollywood's biggest mysteries: the "Black Dahlia" case. Elizabeth Short, dubbed the "Black Dahlia" by the media, was rumored to have been drinking at a bar in the Cecil Hotel just days before she was murdered in 1947, KCET reported.

A popular resident of the hotel named Goldie Oswood, was found violently slain in 1964. Her death remains unsolved. The hotel also attracted serial killers, including Richard Ramirez, who reportedly made one of the hotel rooms his temporary home during his 1980s killing spree. Then, in 1991, Austrian serial killer Jack Unterweger rented out his own room in the hotel. During his time there, he murdered at least three sex workers. Elisa Lam's 2013 death at the hotel, which was ruled accidental, also fueled more haunting rumors after eerie elevator footage of her last hours alive was released.

Tim Rozon and Melanie Scrofano talk reuniting (minus the mustache) in Episode 3 of SYFY's SurrealEstate
Home is where the haunt is in 'SurrealEstate': How to watch SYFY's new scripted series

If you're into macabre real estate stories like the ones featured above, be sure to check out SurrealEstate, premiering Friday, July 16 at 10 p.m. ET on SYFY.