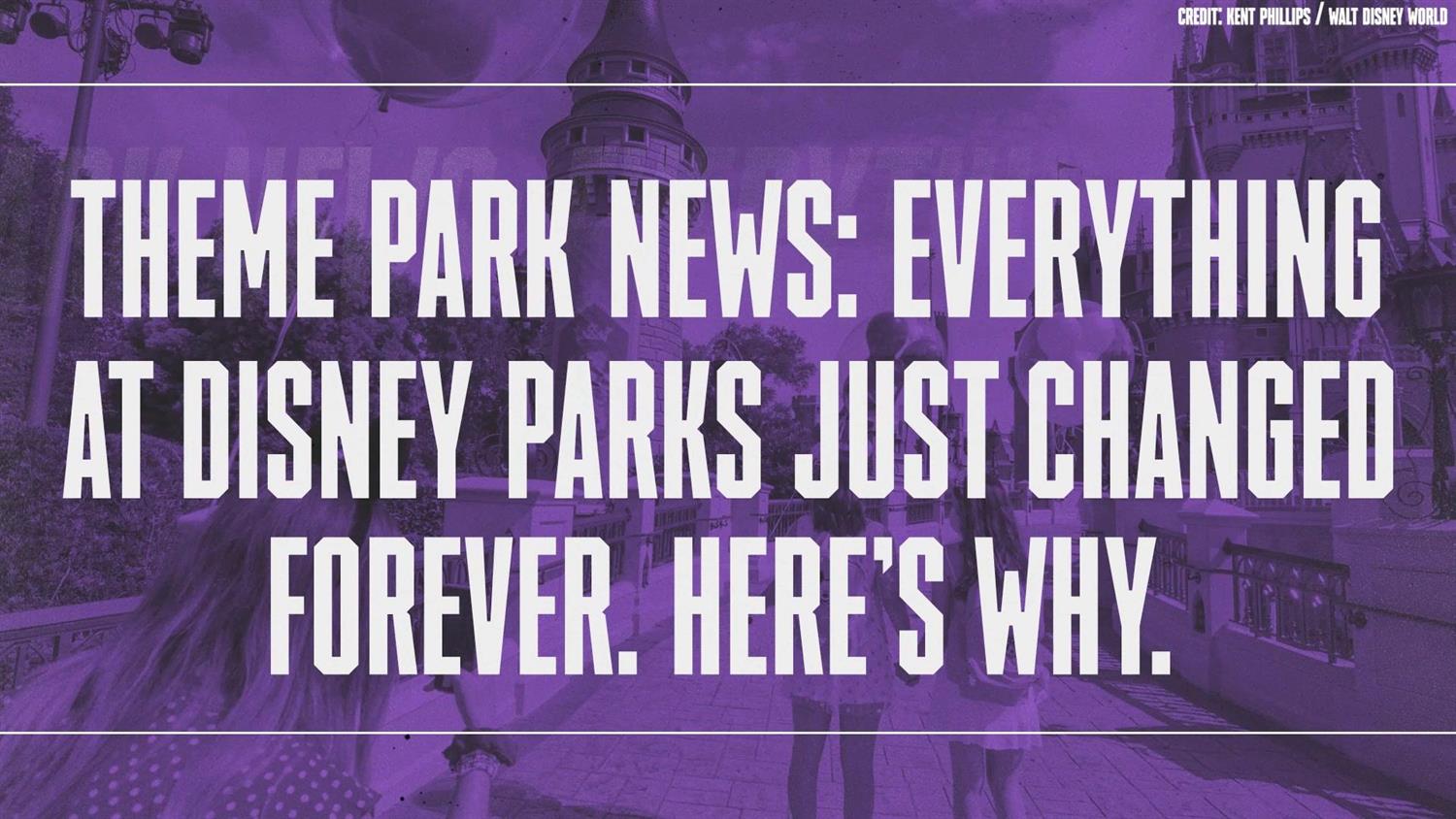 Whew, buckle up for an earth-shatteringly big week in theme park news. Plainly put, the way you visit Disney Parks is about to change forever, and you’ve got some studying to do before then. Better not be late to class for what you’re about to learn, so let’s get into this week’s latest:

We’ve got absolutely major news this week, as Disney World and Disneyland abandon their old practices of FastPass, FastPass+, and Maxpass in favor of a new suite of software and premium purchase options with Disney Genie, Disney Genie+ and Lightning Lane.

Before we get into the, ahem, depths that are park goers' new way of life, let’s first offer a collective exhale for the institutional knowledge amassed among fans who lived their lives by Disney World benchmarks — 180 days for dining, 60 for FastPass+ reservations for hotel guests, and 30 for normal folk — all of which are now kaput. The FastPass program didn’t return when the parks did, and all the plotting, strategy, and 4 a.m. West Coast wake-up calls to book a FastPass+ to ride on Avatar: Flight of Passage is gone for good, being replaced by a tri-tier approach to theme park queueing.

I’ll be real with you — there is a lot to take in here, so let’s take it step by step:

This new program will exist within Disney’s theme park apps and allow all guests at Disneyland and Walt Disney World to receive customized, real-time itineraries based on what they like to do throughout the parks. It’s free, available to all, and frankly, sounds pretty cool, particularly for Disney World, where planning a vacation so far in advance could be burdensome, so we’re curious what the functionality will be like when it launches this fall.

That little plus sign does a lot of heavy lifting here, since this is an entirely different offering. Not to be confused with Disney Genie’s free service, Genie+ is a paid, premium product that mimics the previous Fastpass system on both coasts, for a price.

If you want to “skip the line” with expedited entry into rides, this is going to be the way going forward. Previously, all Disney World guests would be able to pre-select three experiences a day with FastPass+, and all Disneyland guests would be able to pull FastPasses from ticket kiosks. Now, that ability is exclusively reserved for those who choose to purchase Genie+, and it’s being handled digitally, within Disney Genie’s custom itinerary platform.

For $20 per day per person at Disneyland (which grants quicker access to over 15 attractions) and $15 per person per day at Disney World (granting quicker access to over 40 attractions), Genie+ buyers can book “return times” on previous FastPass-enabled attractions like Haunted Mansion, Big Thunder Mountain Railroad and Millennium Falcon: Smuggler’s Run. (The cost of Genie+ includes PhotoPass photos at Disneyland and some slightly odd Snapchat-style AR filters at Disney World.)

Here’s where things get interesting. For select, in-demand attractions at Disney World and Disneyland, guests can purchase individual a la carte entry to enter the “lightning lane” — the formerly known as FastPass queues — and breeze their way onto the most popular rides.

Let me give you an example of how this changes things. Wanna ride Seven Dwarfs Mine Train at Magic Kingdom without waiting in a lengthy line? Before, you’d have to wake up 60 days in advance of your arrival to nab a coveted return time. Now, you can either buy your way in, day-of, or hop in the Standby line whenever waits are low, as per Disney Genie’s complementary itineraries. (Which they should be, since the entire FastPass+ queue isn’t likely to be jam-packed like before.)

This — I know, I know — levels things up in an entirely new way with rides that use Virtual Queue, the “boarding pass” system for Disney’s newest and most popular attractions, including Star Wars: Rise of the Resistance, Web Slingers: A Spider-Man Adventure and, when it opens on Oct. 1, Remy’s Ratatouille Adventure. These rides do not have standby lines, so if you didn’t get a boarding group? You don’t get on. The introduction of a pay-your-way option can help solve those dreaded park days for infrequent guests who came for the latest and greatest, and quickly discover there’s simply no way to just wait in line.

If you’re wondering “why on Earth did Disney introduce this convoluted system”, well, it is a mouthful upon first reading, but it makes sense. Disney Parks were always headed towards a strata of paid options or, as fans call it, “Paid FastPass”. Guests are still allowed to access every single ride for free, but if you want a more seamless trip, easier access or to simply guarantee you’ll get on the hottest ride? Well, you’re gonna have to pony up a nominal sum.

That being said, this system does favor the individual Disney Adult over families, who are likely to shell out $80-$100 per day to “skip the line” in a way that was previously free. After all, Disney Genie+ can be purchased for a single day day-of, but if you want to add it in advance, it’ll be for the duration of your trip — with no discounts for multiple days in a row.

I remain surprised, though, that it’s not offered as a perk of staying on property at Walt Disney World. Perhaps they wanted to launch Disney Genie without the burden of tens of thousands of guaranteed Genie+ users filling the Lightning Lane queues, but it signals a certain kind of devaluing of Disney-owned hotel reservations that I still can’t seem to wrap my head around, as other core offerings, like Extra Magic Hours, have also pivoted.

Yes, Disney World guests will now get a half-hour Early Entry head start at all four parks every day of the year, but on-property hotel perks have seemingly been decimated, particularly with the obtuse decision to cut Disney’s Magical Express bus transportation service in 2022. (It’s a choice I believe will prove to be extremely foolish, given the increased difficulty in renting cars and rideshare’s waning availability since that early 2021 announcement.)

When you factor that in, it’s easy to understand why guests feel like they’re paying so much more for things that were once free. Want nighttime “magic hours?” They’re now exclusive to Deluxe hotel guests, the priciest tier. Need to get your family from Orlando International Airport to Disney’s Coronado Springs Resort? You can still hop a bus from plane to park, but it will be through Mears, the private transportation company previously contracted by Disney. It’ll cost you — $16 for adults and $13.50 for children on one-way rides, no small sum when hotel rates haven’t lowered and Disney previously footed the bill. Add the removal of perks like luggage being delivered to your hotel room and complimentary Magic Bands, and they're somewhat confoundingly edging into that all-in vacation loyalty built up over the years. With so many cheaper hotels down the road — and the ability to buy your way onto rides equivalent between Disney’s and, say, Marriott’s hotels, save for a slight advantage on those one-off individual attraction selections — it unequivocally devalues staying on property, a choice that...doesn’t quite add up to me.

Still, I think this shift towards Disney Genie+ and a la cart options was the right choice for the parks going forward. Without getting too deep into the statistical analysis of it all, all guests having FastPass access often made standby wait times long. By limiting the number of guests who receive expedited entry, the standby lines can, hypothetically, move more quickly, particularly when in-app software is nudging you towards locations that currently have shorter lines.

The FastPass system was broken, without a doubt. Will this tiered approach fix it? For that, we’ll have to wait until it starts later this fall.

Confused on how this will affect your trip? I've made a series of guides, explainers, and videos to help explain further, but stay tuned for more as Disney Genie debuts later this year.

Theme Park News: What's happening with Florida's COVID-19 outbreak — and how it may affect your trip
Theme Park News: A look towards Disney World’s major month as Christmastime looms on the horizon