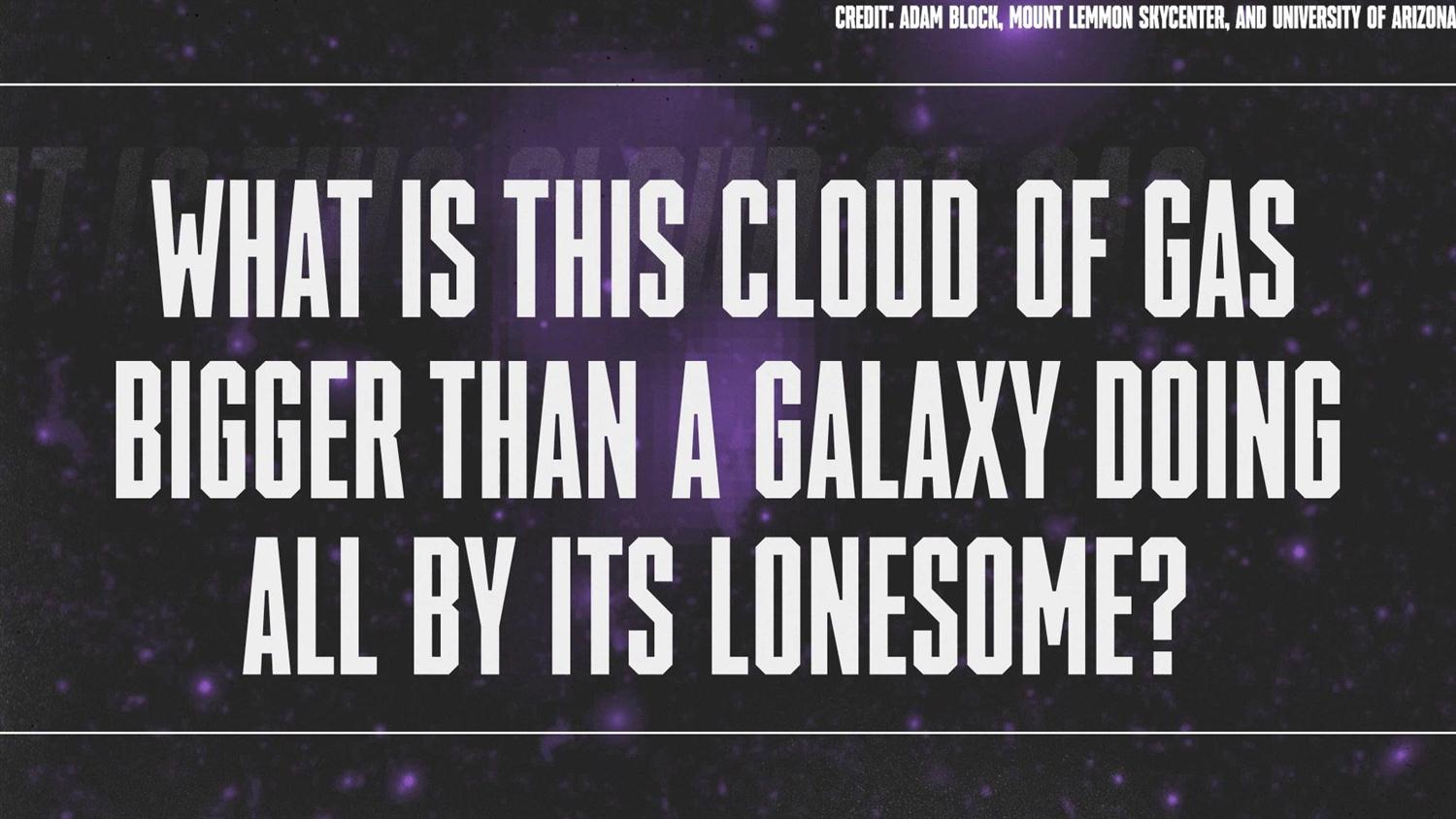 What is this cloud of gas bigger than a galaxy doing all by its lonesome?

Astronomers have found a truly gigantic and fiercely hot cloud of gas floating near the edge of a galaxy cluster, and it’s blasting out X-rays. Hot gas is common in clusters, but usually concentrated near the center and thinner the farther you go outward. This one is a singular cloud millions of light years off to the side, and also seems to have a source of energy gently exciting the gas that is nowhere to be seen.

Oh, I do so love the weird ones.

Clusters of galaxies are truly gigantic structures. As the name advertises, they are collections of galaxies all held together into a cluster by their mutual gravity. Some are small, with a few hundred galaxies, and some have thousands, all orbiting the cluster center of mass at hundreds of kilometers per second. A typical cluster is tens of million light years across.

Strewn throughout most of them is a thin distribution of gas, called the intracluster medium. That gas can be heated by the galaxies moving through it, as well as by stars in those galaxies exploding and supermassive black holes in the galactic center spewing out high-energy radiation. This gas can be heated to millions of degrees, causing it to glow in X-rays. Those X-rays are a diagnostic that can be read to get information about the cluster, such as its mass and how the galaxies are moving around in it.

The Leo Cluster, a small collection of dozens of galaxies about 300 million light years from Earth. Credit: Adam Block, Mount Lemmon SkyCenter, and University of Arizona.

The Leo Cluster (aka Abell 1367) is relatively near to us at a mere 300 million light years distant, and made up of roughly 70 big galaxies and likely hundreds of much smaller ones. It has just such an intracluster medium, but there’s more. Off to one side by about 3 million light years is a cloud of gas glowing in X-rays. It’s huge, probably 200,000 light years across, so nearly twice as big as our entire Milky Way galaxy! The amount of gas in it tips the cosmic scales at roughly 10 billion times the mass of the Sun. That’s enough to make a decent-sized galaxy all on its own.

The gas is hot, too, around 2 million degrees. That’s not too unusual for gas in a cluster, except this cloud is all by itself to one side, which is odd. Using various characteristics the astronomers who observed it were able to show it’s not the gas from some more distant cluster in the background. Sometimes groups of galaxies fall into clusters, and the gas in those can mix with that of the cluster, but that doesn’t seem to be the case either; there is no galaxy group nearby.

Because of this they call it an orphan cloud, and it’s the first of its kind ever seen in a galaxy cluster.

The most likely scenario, they posit, is that this may have been gas stripped from a big, massive galaxy long ago. As galaxies orbit around the cluster center, the gas inside of them (called the interstellar medium) can get blown out by the pressure from the gas in the cluster. The analogy I always use: You’re in a car and your dog has emitted an unfortunate and pungent cloud of gas. What do you do? Roll down the windows, and let the wind from your car’s motion blow it out.

Bigger scale, but same thing here. You can even some stripped gas coming out of a galaxy at the lower left of the image, blowing up and to the left a bit.

The parent galaxy for the orphan cloud would have to be pretty dang big to have that amount of gas in it, and it’s not clear what galaxy it was. Nothing nearby is big enough, but it could’ve happened so long ago the galaxy itself has long since moved on.

They also observed the orphan cloud in a wavelength of light emitted by warm hydrogen and found that it has clumps of gas in it, possibly from turbulence created by its motion (it’s moving to the right in this image).

Weirdly there doesn’t appear to be any stars forming in it, despite the fact it could make billions of them. Those clumps would indicate there are denser parts to make stars, but deep images don’t show any at all. The authors posit there may be a weak magnetic field embedded in the gas that applies an outward pressure, acting to oppose collapse into stars. It only needs to be roughly a millionth of the Earth’s magnetic field strength to do this.

Another mystery, though, is that the hydrogen light points toward some source pumping energy into the gas and making it glow (we say this excites the gas). Without star formation in the cloud there are no young, massive, luminous stars to do this. No other source seems to be nearby, either. It’s unclear what this source is. Maybe a nearby galaxy, its central black hole sending out high-energy radiation…? No one knows for sure.

It’s a weird thing, this orphan cloud. Maybe it’s a really rare circumstance that formed it; after all, no other has ever been seen. Maybe this one just happens to be the brightest of a collection of more common objects that are too dim to spot. It’s hard to tell when your sample is just one object. Hopefully more of these can be found to help us understand them… or that this really is rare and deeper observations are made.

The intracluster medium controls how stars form inside galaxies in the cluster, and how the galaxies themselves behave on large scales. They’re the key to understanding the Universe on its largest scales, but we have to understand these smaller pieces first.