Why Spider-Ham might be the most powerful Spider-Man of all (no, really)

Picking a favorite Spider-Man is harder than ever thanks to Into the Spider-Verse, which introduced audiences to seven new web-headed heroes with wildly different personalities — and perhaps more importantly, from radically different backgrounds.

For Spider-Ham, a spider bitten by a radioactive pig, that background was literally two-dimensional — and on the film's upcoming home video release, audiences get to explore it in a short prequel film, "Caught in a Ham," that owes as much to classic Looney Tunes cartoons as to the technical and artistic marvel that just won Best Animated Feature at the Oscars. Produced by David Schulenburg and directed by Miguel Jiron, the pun-filled romp introduces Peter Porker and shows what he was doing right before getting sucked into the portal that landed him alongside the film's other alternate-dimension Spider-People.

SYFY WIRE recently sat down with Jiron and Schulenburg for a meaty conversation about the process of creating a Spider-Ham short, where the duo discussed the character's comic book origins and the challenges — and opportunities — of transforming him into a true cartoon superhero.

When you were tasked with creating "Spider-Ham: Caught in a Ham," was the original idea that it be a "backdoor prequel," or was that something you decided to reverse engineer into a companion piece to Spider-Verse?

Miguel Jiron: From the beginning, we were like, we would love for this classic cartoon to open up our movie like how they used to do back in the day. And pretty early on we were like, if it's going to screen in front of the movie, it would be cool to see Ham's last moments in his world before he comes to the [Spider-Verse]. So pretty early on we brainstormed something we thought would be a perfect way to connect to the film and see them together.

Spider-Verse obviously inspired the design of this, but how did you adjust the animation for a two-dimensional universe?

Jiron: We wanted to push things a little bit further to see Ham in his world. The film does such an amazing job synthesizing all of these different kinds of animation styles together in the film. So we do see a couple of glimpses of Ham's world in Spider-Verse, and so we took that and just kind of ran with it, to make things even more cartoony in animating Ham. We wanted to push the hand-drawn, unique quality of our short with the character as much as possible. So there are these beautiful, really bizarre mid-action frames of ham smearing across the camera — which is great.

There's a funny joke in Spider-Verse where someone says, "Can he say that? Legally?" when Spider-Ham says "That's All, folks." But where did you draw the line in taking inspiration from Looney Tunes and other cartoons for the character's behavior or general magic realism?

Jiron: It's part of the character's DNA. We really just wanted to embrace that. I loved those cartoons growing up — I inhaled them as a kid. So we were kind of given license to just embrace that and go full cartoon.

Schulenburg: There are specific moments that are callbacks or references, but I think as a whole it was really meant to feel like you were watching this and you were remembering your childhood, and that's really what it's about. It's meant to be silly and fun and it does pay homage by bringing back all of those fun moments that I remember as a kid.

Jiron: And kind of combining it with a more post-modern sensibility with the workshopping the names of Dr. Crawdaddy, or addressing the camera. We were really trying to aim between those two ideas conceptually.

Other than the beautiful nonstop puns, what elements of the comic books did you wanted to preserve? And what other things seemed less important in terms of the character's "mythology?"

Jiron: Personally speaking, I read all of the comic books and was like, okay, if we don't embrace the pun in our short, we're not embracing the character. And the character was created as a self-referential idea, so I think that fourth-wall-breaking sensibility and the puns and that just really light, silly tone is what we really embraced from the comic books. What we did in Spider-Verse was really highlight the classic cartoon nature of Ham and leaning more into him as a cartoon rather than a pig — that's a slight deviation of this character that we embraced. But from the comics, definitely the puns, the tone, and the wall-breaking were pretty crucial.

Was it difficult at all to create a throughline between this and Spider-Verse given that the character in the film has a little more emotional substance?

Schulenburg: We wanted to show Ham in his moments before he goes through the portal, so this is his world where he feels comfortable and his every day — going to work, what does he do? He eats hot dogs and he fights villains and you feel this is him in his element. So I don't think we had to overthink an emotional range for him in that moment. And then when he goes through that portal, and says "I hope I haven't missed the first 62 minutes of somebody else's movie," he then has these touching moments with Miles where he gives that hammer to him.

Hopefully you see this short prior to the film, and you see why that hammer a special to him — he loves it! He fights villains with it every day, and that's why it's important. So we created a through-line, but I don't think we over-thought it too much.

Jiron: We looked at it as our way to create the first part of Ham's arc in the film, because we meet him, [as he says] 62 minutes into the movie. So we took the opportunity to show that this is Ham in his element, confident, doing his thing and then just gets really tripped up. So just by thinking along those terms alone, that's what led us to get to the short — we have him confident in his world, and suddenly get destabilized. So we looked at it as kind of an Act One of Spider-Verse that we haven't seen before.

I understand that there was a joke cut out of Spider-Verse that was considered inappropriate because people think he's a pig eating a hot dog (he's a spider bitten by a radioactive pig). Were there other references or jokes for whatever reason that you were unable to execute in Spider-Verse that you brought over to the short?

Jiron: When I was a story artist on Spider-Verse, I brainstormed a lot of different fight moves for Spider-Ham — how would a cartoon fight, as a credible threat? So one thing we ended up resurrecting for the short was the floating stars [over his head] if he gets hurt, and using them as ninja stars. But it was a delicate balance in the movie, because if Spider-Ham could just pull out a mallet or anvil at any given moment, does that make him the most powerful Spider-Person out there? It kind of does. So it was an opportunity for us to delve a little further into more cartoony aspects of him in our short than the movie could afford to.

It's really neat to see the portal show up in this two-dimensional animation setting. But how did you reconcile for the short what would maybe essentially have to be different styles of animation?

Schulenburg: I don't think we were quite sure what the final look was going to be, because we made this piece organically as we went along. But at the beginning when we were talking about the portal, the one thing that was so important is that we have to make the connection that it's the same portal from the movie. And I was like, we could just copy and paste it so it just looks really hacky in there and that'll be okay — it's a Ham short, it'll be hilarious!

But as we got farther along and we really refined the look of those amazing backgrounds, we needed to be a little bit more sophisticated with it. We had to figure out a way to make it 2D but still recognizable, so that you can draw the connection between the short and the film. So it was always important that the two look the same. We just weren't quite sure how we were going to approach it. And I think we're pretty proud because we think the connection is clear.

An expert in the Spider-Ham comics, is there a character or storyline that you would love to bring in to another short?

Jiron: I'm not sure about characters, but one thing that's really important that is taken very seriously in the Spider-Ham comics is his photojournalism career, and that would be really fun. I think John Mulaney talked about it on some press thing the other day, about making a Spider-Ham movie, but like The Post, which is pretty hilarious. And the comics definitely are all really centered around his workplace and him as a photojournalist. So that would be really fun to embrace one day.

Schulenburg: Were you talking about other Spider-Heroes?

Sure, or any of the stuff sort of from the canon of the comic books.

Jiron: Yeah, a real hard-boiled kind of detective gumshoe story would be so cool to see.

Given the many iterations of Spider-Man before this movie, when does a character like Spider-Ham become its own character on screen and you are no longer beholden to not just source material, but existing canon?

Jiron: There's such a wealth of material out there that is still untapped, and speaking as a comic book nerd, it'd be so cool to see so many storylines onscreen. But I think one of the wonderful things that Spider-Verse does is completely blow it up in a very loving way that's very faithful and understanding the essential mythos of Spider-Man. So what's exciting is that ideally at this point, people are just so familiar with the Spider-Man backstories and everything that it's liberating just to take that idea and run with it. You know, so why not see Spider-Man as a Looney Tunes cartoon? It'd be fun! 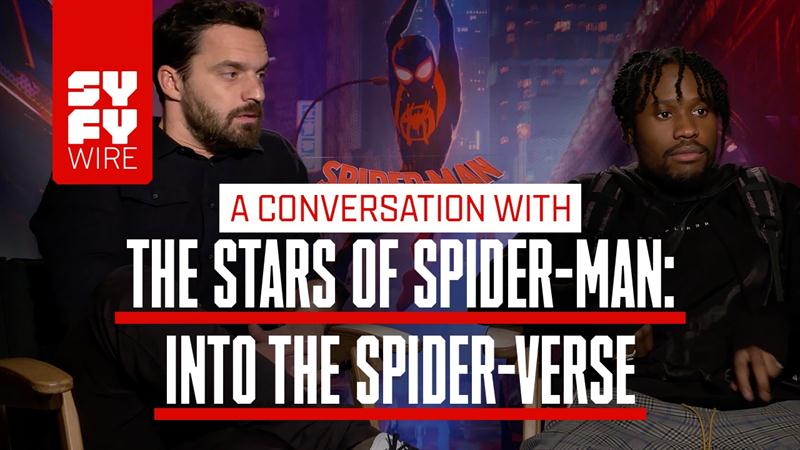