40 years ago, as the Fourth Doctor (played Tom Baker) diagnosed his robot dog K-9 with a case of robot laryngitis, the mythology of Doctor Who was flippantly and casually changed forever. Hardcover Whovians know that the rules of Time Lord regeneration can get dicey, but one very specific wrinkle — the idea that a Gallifreyan could possibly choose what their next body might look like — originated in the 1979 episode, "Destiny of the Daleks." Here's why one small scene altered Who canon forever.

Back on September 1, 1979, when "Destiny of the Daleks" first aired, the Time War hadn't happened yet and appearances from other Time Lords (or Time Ladies) was fairly common on Doctor Who. In Season 17 of the original run, the Doctor's companion was a fellow Gallifreyan Time Lady named Romana. Originally, Romana was played by actress Mary Tamm in the season 16 serial "The Ribos Operation." Then, in Season 17, Romana was played by Lalla Ward, because Romana had regenerated. Now, by this point in the series, the Doctor had regenerated three times, but a companion who was also a Time Lord hadn't. But that's not what was weird (in the context of a show about regenerating Time People, that is).

The reason Romana's regeneration was so unique is that the new actress, Lalla Ward, had already played a different role on the series. In the Season 16 serial "The Armageddon Factor," the first Romana (Mary Tamm) and the Doctor encountered a character named Princess Astra, who also happened to have been played by Ward. So, when Ward was later cast as the new version of Romana in Season 17, it required an onscreen explanation. 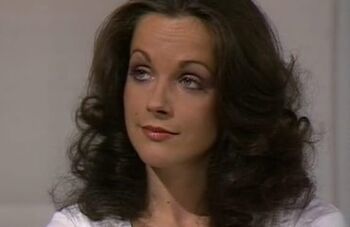 The first Romana as played by Mary Tamm. (Credit: BBC)

In the scene, the Doctor is freaked out that Romana suddenly looks like someone they both had recently met. "But you can’t wear that body!" he protests. "You can’t go around wearing copies of bodies!" The newly regenerated Romana insists it didn't matter. She likes the way Princess Astra looks and says they probably aren't going back to the princess's home planet of Atrios anyway.

Though Terry Nation is given writing credit on this episode, one DVD commentary suggests that script editor Douglas Adams did a huge rewrite on it. And yes, it is that Douglas Adams, famous for the Hitchhiker's Guide to the Galaxy books and Dirk Gently. In fact, it could be argued that Romana's entire attitude around regeneration has a flippancy and humor that could easily have been ripped from the pages of Douglas Adams's famously hilarious sci-fi books. After all, as far as we knew, Romana didn't even need to regenerate, she simply did, because she could.

But who cares? Why does this small, funny scene matter? Well, prior to this moment, Doctor Who canon had never demonstrated that Gallifreyans could control the outcome of their regeneration, much less choose to duplicate the exact bodies of people they'd met. In fact, most of the Doctor's regenerations seem to be totally random, but in recent years that's changed significantly. In "The Night of the Doctor" (the prequel minisode to "The Day of the Doctor") we learned that the Eighth Doctor (Paul McGann) was able to choose what form his next incarnation would take, hence the War Doctor's (Jon Hurt) sterner persona. And, perhaps most relevantly, the Romana in "Destiny of the Daleks" scene explains Peter Capaldi's entire existence in the Who canon.

When the 11th Doctor (Matt Smith) became the 12th Doctor (Peter Capaldi) in "The Time of the Doctor," most fans were keenly aware that Capaldi had played not one, but two separate roles in the Who-universe before. In the 10th Doctor episode "The Fires of Pompeii" Capaldi played a Roman named Caecilius. And in the Torchwood miniseries "Children of Earth," Capaldi played a politician named John Frobisher. Some fans figured this would never be explained, but back in 2013, then-showrunner Steven Moffat assured everyone there was an explanation. And, by 2015, in Season 9 of the current run of Who, this explanation was made clear. Like Romana, the Doctor chose to look like someone he'd met before.

In the Season 9 episode "The Girl Who Died," the 12th Doctor finally remembers why he looks like Peter Capaldi, or more specifically, Caecilius. After having a flashback to "The Fires of Pompeii," the 12th Doctor realizes that he subconsciously decided to regenerate into someone who looked like Caecilius to remind himself, basically, not to be a jerk. "I know where I got this face, and I know what it's for!" he says. "To remind me. To hold me to the mark. I'm the Doctor! And I save people!"

It's a fantastic scene, stirring and triumphant and full of everything that made Capaldi's version of the character so great. It's a far cry from the sarcastic exchange between Romana and the Fourth Doctor so many years before, but there's a direct line between the ability described by Romana in "Destiny of the Daleks" and the Capaldi revelation so many years later. In the real world, this is just a complicated science fictional way explaining why actors can play more than one role in a kooky time-and-space adventure, but within the canon of the show itself it feels more profound.

After all, in the coda to "The Day of the Doctor," the 11th Doctor (Matt Smith) meets a mysterious man named the Curator played by none other than Fourth Doctor actor Tom Baker. In the scene, the Curator suggests that in the future the Doctor might revisit some of his previous faces, but "maybe just the old favorites." If this is true, then in the distant future of Doctor Who canon, the Doctor will be able to accomplish what Romana was able to do in three seconds 40 years ago. Thankfully, Jodie Whittaker isn't going to regenerate into old Tom Baker anytime soon, but in a few years to come, who knows? Who, knows.

All Posts About
Features
TV
Doctor Who
Related Stories