Groundbreaking, epic, and heartfelt, the quintessential indie comic Love and Rockets is as relevant today as it was when Mario, Gilbert (aka Beto), and Jaime Hernandez self-published the first issue in 1981. A blend of sci-fi, telenovela, superhero tales, comics, jokes, and short stories, the magazine was worlds away from anything anyone, especially Marvel or DC, was publishing during those days.

Not only did Love and Rockets usher in a new age of independent comic books, but it also broke ground with stories featuring marginalized voices and characters from the LGBTQ and Latinx community. By the time DC and Marvel had introduced Latinx characters like Sunspot, Firebird, and Bushmaster in the early '80s, Margarita Luisa "Maggie" Chascarrillo, Esperanza "Hopey" Leticia Glass and the fiery Luba were living out real lives in the fictional towns of Hoppers and Palomar in Love and Rockets.

Over the last 27 years, Los Bros Hernandez's characters have evolved and even aged alongside their creators. For example, Maggie and Hopey are now in their late 50s with significant others. If Peter Parker lived in Palomar, he would be 72 and, quite possibly, years into a well-deserved retirement. Utilizing inventive storytelling and compelling line art to produce universal stories, the Hernandez brothers showcased their experience growing up in Latino neighborhoods in California.

Artists from R. Crumb to Trina Robbins, Moebius to Adrian Tomine, Neil Gaiman to Alan Moore, Matt Fraction to Alison Bechdel and Kristin Hersh have all cited the Hernandez brothers as influences. For many Latinx comic book creators and fans, the book was revolutionary.

Eric Reynolds, Fantagraphics Associate Publisher and editor of the Love and Rockets series, said the comic arrived at a time when mainstream fare was "moribund, with content catered almost exclusively to young, white males."

"Their comics, populated by women, people of color, gay and bisexual characters, were completely sui generis and blew the doors open for the medium of comics, ushering in the 'alternative comics' movement of the 1980s and '90s," he told SYFY WIRE.

Former Marvel Editor-in-Chief Axel Alonso was growing up in San Francisco in the early '80s when he read his first copy of Love and Rockets.

"To see Latino characters portrayed in comics at all, let alone characters as complex as the ones that both Jaime and Beto put down on the page, was transformative," he told SYFY WIRE this week. "And the fact that so many of the characters lived at the intersection of SoCal Punk Rock and Lowrider culture — it was like they were making a comic just for me."

Alonso said stories like Jaime's "Death of Speedy Ortiz" and "Flies on the Ceiling" had a profound impact on him as a reader and a creator.

"I can't think of a page with more emotional resonance than the one where Speedy's ghost comes back to say goodbye to his friends, ending with Izzy waking up to an empty room," Alonso said. "And when Izzy goes to Mexico to do some spiritual detox, the man she falls in love with is a dead ringer for my father when he was young."

The importance of representation in comic books is best illustrated by Jaime Hernandez himself, who said the idea to incorporate his real-life experiences living in SoCal into Love and Rockets didn't even come to him until he was a teenager. Having grown up with comic books courtesy of his mother and older brother Mario, both Gilbert and Jaime read and drew inspiration from Marvel and DC heroes, along with Dennis the Menace and Archie comics.

"I didn't see many comics from Mexico so I mostly grew up on the American stuff," Jaime told SYFY WIRE. "Growing up, wanting to do our own comics, we created characters but they were all white. That seemed normal. Kind of like, well, these are the characters and this one's name is Bill Jackson. I just didn't think about it."

At the same time, the Hernandez brothers were growing up in a Mexican neighborhood in America, soaking up the telenovelas, listening to music from the barrio and hanging out with their friends

"We'd be doing all this cool stuff, hanging out, going lowriding, cruising on Sunday night. That stuff is fun. And I thought, 'How come we never put those in the comics? I figured, 'Why don't I change this one Maggie character into a Mexican girl.' It was one of those things we noticed one day," Jaime said. "The more we did that the more we were able to put our life into it. That's why I started liking to do the characters' real lives more than creating a superhero universe." 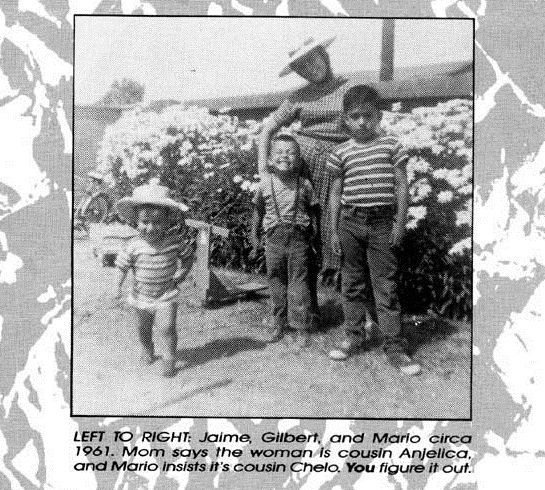 Bazan first heard of the comic in high school when a friend said she reminded him of the character "Izzy" Ortiz Ruebens.

"He lent me some single issues of Love and Rockets and there indeed were Latina characters that looked, acted and sounded like me," she told SYFY WIRE. "It wasn't until we read Maggie the Mechanic for our first episode of Comadres y Comics that the impact that this representation had on me resonated. As an adult, I was able to better comprehend what seeing someone who looked like me and represented my culture in media as a teen actually meant. Turns out it meant everything."

What struck Parraz, co-owner of Hi De Ho Comics in Santa Monica, was how genuinely strong and independent the women of Love and Rockets are written and, just as importantly, how they were drawn.

"The female figures differed character to character with there being all shapes and sizes," she told SYFY WIRE. "Having only read modern comics before reading Love and Rockets it struck me how much of an impact it made on me to see the female form drawn accurately and not for the male gaze. Interestingly, the sci-fi stories stuck out to me the most because it was the first time I had been exposed to Latinx characters in a sci-fi story."

Placing women in non-traditional roles was an ongoing theme in Love and Rockets and way before its time, Bazan said. One recent example of a book that carries some Hernandez Bros influence is Lowriders in Space by Cathy Camper and Raul (Gonzalez) The Third, she said. As co-creator of that series — which follows three anthropomorphic animal friends chasing their dream of building a lowrider against the backdrop of the borderland of Mexico — Gonzalez III has made a career of depicting Latinx life, especially along the U.S./Mexican border, with his art.

Much like Hernandez, Gonzalez III thought all heroes were meant to be "white dudes with tights" so that's how he initially drew them. It wasn't until college when he found Love and Rockets.

"Suddenly I found myself working in a comic book shop and Maggie, Luba, the Death of Speedy, wrestling Abuelas popped out at me in a way that was familiar in a whole different way," Gonzalez told SYFY WIRE. "I felt like I was reading something personal. It felt like my Mams novelas via Mexican Archie comics. I saw myself and my barrio reflected in a way I'd never seen in comics before."

In the way fellow El Pasoans Gaspar and Luis Jimenez paved the way for Gonzalez's art career, he said, Los Bros Hernandez showed him through comic books that being Mexican American was something to be proud of.

"They illustrated stories about Latinx culture and created an opus that is rich in both personal and cultural history," he said.

'There was no clear independent market before Love and Rockets but over time, with their success, the Hernandez Brothers helped to grow the market share of indie comics," she said. "So much so that indie comics now make up close to one-third of the comic book industry market. That doesn't even account for the individual showing up to local conventions and zine fests, self-publishing and selling by word of mouth, a tactic largely used by the Hernandez Brothers in the early days."

According to Gilberto Hernandez, he and Jaime have served as reluctant role models, of sorts.

"If we could do it, why not others," he told SYFY WIRE. "In my eyes, there's the mainstream artists who want to make the best Batman comic ever, with cleverness and detailed art. The indie artists tend to come up with stories about themselves and the readers want to see themselves in the comics. I'm in the middle there somewhere."

Although he discovered Love and Rockets later in life, Sebastian Kadlecik took inspiration from the series before creating his own Latinx-inspired comic book, Quince, the story of a Latina teen, Lupe, who discovers her superpowers on the day of her quinceañera, or 15th birthday.

When networking and researching for his book, the name Los Bros Hernandez kept coming up in his discussions with Latinx comic creators and fans. 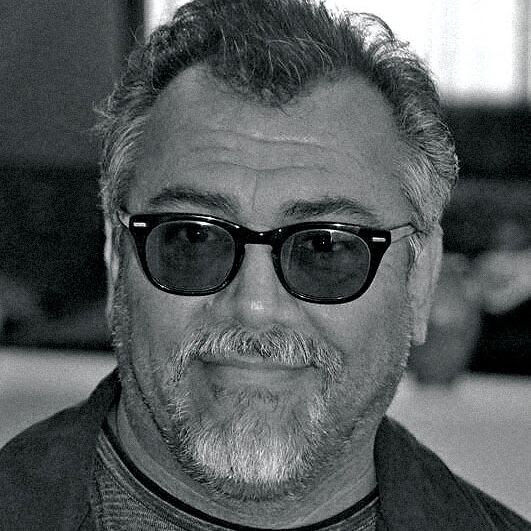 "I appreciate how we are dropped into this interesting familiar world with so much Latinx culture and yet there's this otherworldly sci-fi element," he said. "I love seeing punks, chicanos, robots, vatos, and hover bikes all living in the same world."

Kadlecik said the storytelling in Love and Rockets continues to inspire and creatively challenge him.

"I love seeing the integration of Latinx culture in a futuristic world without there needing to be a big explanation as to why-- there doesn't need to be an explanation," he said. "We exist. We have existed. We will continue to do so."

When Domino writer Gail Simone was a kid, Love and Rockets was the comic that showed her what comics could be, she told SYFY WIRE. Not one to get starstruck, Simone said that all changed when she met Los Bros Hernandez at Excalibur Comics, for Wonder Woman Day, benefitting a shelter for victims of domestic abuse.

"A lot of it flew right over my head, but there would be scenes of gut-busting comedy, heart-rending romance and the lyricism of real-life worlds I had never before experienced in any media," she said. "I was somehow seated at a table right next to these two titans, these brilliant, brilliant creators, and I was just almost completely unable to speak. But it turned out that Gilbert and Jaime are as kind as they are gifted, and they welcomed me like a colleague, they could not have been nicer. Gilbert drew me a Black Canary sketch, and Jaime drew me a Wonder Woman sketch, and they treated me as a sister, and even years later, it puts a smile in my heart that can't be contained."

It's a fan thing
Join SYFY Insider to get access to exclusive videos and interviews, breaking news, sweepstakes, and more!
Sign Up for Free
All Posts About
Comics
Features
Foreign Exchange
Interviews
Related Stories

Get an exclusive sneak peek at 'Hogwarts Legacy'

Did you catch that ‘Stargate’ Easter egg in ‘Quantum Leap’?