The universal process of birth is often filled with great promise and exhilaration, and so it is with stellar nurseries in the far reaches of the galaxy as astronomers at the W. M. Keck Observatory on Mauna Kea in Hawaii have witnessed and identified the creation of a swirling pair of massive protoplanets orbiting the scintillating PDS 70 star.

So grab a figurative cigar and celebrate the happy emergence of twin newborns nurtured in the warm embrace of the system's circumstellar disc.

Headed up by a Caltech crew of stargazing scientists harnessing the observational might of the facility's newly upgraded infrared pyramid wavefront sensor for adaptive optics correction (AO), astronomers were fortunate enough to record the first-ever direct images of these gargantuan infant bodies in the early throes of cosmic creation. 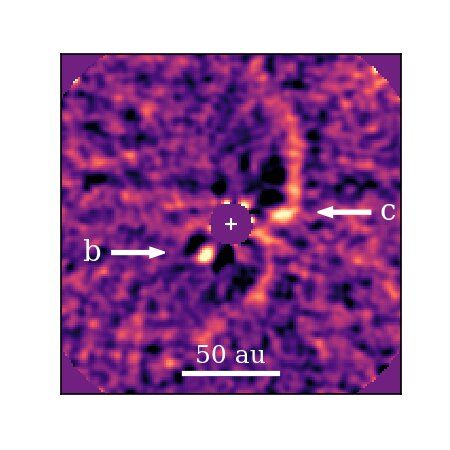 PDS 70, located in the constellation Centaurus some 370 light years from Earth, is well-known as a hotbed of planetary formation and the first infrared shots of one of its orbiting spheres, PDS 70b, was captured in 2018, which then later included a multitude of 2019 images taken at different frequencies of its sister protoplanet named PDS 70c.

The results of this remarkable discovery were documented in a new paper published online in The Astronomical Journal. Lead researcher Jason Wang, a 51 Pegasi b Postdoctoral Scholar in Astronomy at Caltech claims there may have been some confusion during the time the two protoplanets were first imaged due to poor visibility issues.

"Planet embryos form from a disk of dust and gas surrounding a newborn star," Wang tells SYFY WIRE. "This circumstellar material accretes onto the protoplanet, creating a kind of smokescreen that makes it difficult to differentiate the dusty, gaseous disk from the developing planet in an image. We developed a technique to model and subtract off the signal of the circumstellar dust so that we can cleanly study these protoplanets. Based on the masses and sizes we calculated, we think PDS 70 b and c are proto-Jupiters that are near the end of their formation process."

To aid in attaining more clarity and focus, Wang and his team considered various methods by which to pull the curtain back and glimpse these baby worlds more clearly within the murky circumstellar spiral and make an accurate asssesment of their existence. This advanced new tech is allowing incredible investigations never before thought possible.

Employing the observatory's Near-Infrared Camera (NIRC2) installed on the Keck II telescope, astronomers snapped a series of pictures of PDS 70, then added the corrective capabilities of the site's adaptive optics system by testing the new infrared pyramid wavefront sensor and actual-time control computer. This technology is already proving invaluable by instantly enhancing scientists' skills in hunting for emerging worlds and potentially habitable planets.

“The new infrared detector technology used in our pyramid wavefront sensor has dramatically improved our ability to study exoplanets, especially those around low-mass stars where planet formation is actively occurring," adds Keck Observatory engineer Sylvain Cetre. "It will also allow us to improve the quality of our AO correction for harder to image targets like the center of our galaxy.”

Charlotte Bond was one of the main persons involved in designing and installing this revolutionary new equipment.

“The PDS 70 imagery Jason’s team captured was among the first tests of the scientific quality produced by Keck’s pyramid wavefront sensor," adds Bond. "It’s exciting to see just how precise the new AO system corrects for the atmospheric turbulence of dusty objects like the young stars where protoplanets are expected to reside, allowing for the clearest, sharpest view of baby versions of our solar system.”