For anyone growing up in the '70s, there was simply nothing cooler than the original bionic human known as astronaut Steve Austin, aka The Six Million Dollar Man.

Of all his badass cybernetic implants and technological enhancements, perhaps the most desired add-on feature was his telephoto bionic eye and until now, existed only as a far-out science fiction dream from somewhere in the deep nostalgia of television's yesterland. While not nearly as eagle-eyed as Austin's upgrade, Aussie scientists have conjured up a miraculous machine of their own!

Thanks to an ambitious team of medical researchers at Monash University in Melbourne, Australia, the reality of digitally fortified vision via the world's first bionic eye implant has finally arrived. Within the school's Cortical Frontiers project, this revolutionary device will be able to restore visual capacities to the blind or neurologically impaired.

Scientists involved are currently prepping for the planet's initial human trials of this bionic wonder while hoping to raise added capital to manufacture and market their invention to a broader customer base. 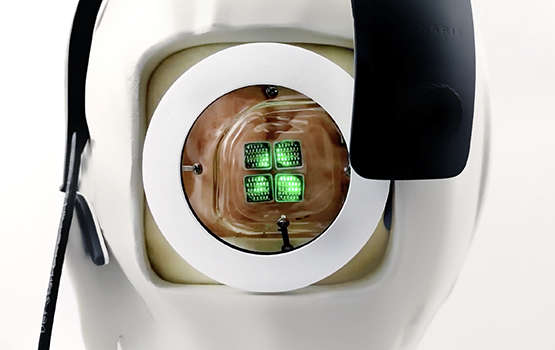 Employing the innards of a smartphone and aided by brain-inserted micro electrodes, the Gennaris bionic vision system is a complicated endeavor that’s been in the research and design phase for nearly a decade.

It operates by leapfrogging a patient's damaged optic nerves to let signals be transmitted from the retina and delivered to the central vision component of the brain. The pioneering system includes custom-designed headgear, which consists of a camera and wireless transmitter. A digital processor does the heavy data manipulation in conjunction with special implanted tiles to bring forth the electronic impulses and stimulate the brain via hair-thin microelectrodes.

“Cortical vision prostheses aim to restore visual perception to those who have lost vision by delivering electrical stimulation to the visual cortex – the region of the brain that receives, integrates and processes visual information,” Professor Arthur Lowery of Monash University’s Department of Electrical and Computer Systems Engineering.

“Our design creates a visual pattern from combinations of up to 172 spots of light (phosphenes) which provides information for the individual to navigate indoor and outdoor environments, and recognise the presence of people and objects around them.” 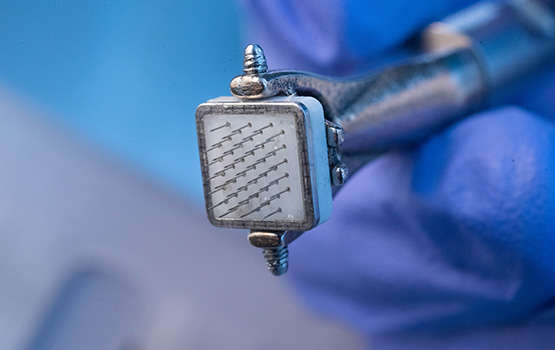 The frontier for brain interface devices has certainly been breached, with Elon Musk's Neuralink device still in its testing and developmental phase, and a “visual prosthetic” device recently engineered by scientists at Baylor College of Medicine in Houston enabling blind and sighted subjects to “view" the shape of letters.

Monash's Gennaris system has had eye-opening results in July test trials, when the equipment array safely transplanted into the brains of three sheep, with a total of 2,700 stimulation hours not revealing any harmful health effects.

“If successful, the MVG [Monash Vision Group] team will look to create a new commercial enterprise focused on providing vision to people with untreatable blindness and movement to the arms of people paralyzed by quadriplegia, transforming their health care,” said Monash University's Dr. Philip Lewis.

It's a fan thing
Join SYFY Insider to get access to exclusive videos and interviews, breaking news, sweepstakes, and more!
Sign Up for Free
All Posts About
News
Science
bionics
You May Also Like
Recommended by Zergnet
Latest on SYFY WIRE