After almost a year of waiting, Batwoman finally made her solo debut on The CW Sunday night, and I have to be honest, the pilot episode made a much better argument for the character’s inclusion in the larger Arrowverse than last year’s crossover did. Sure, while the pilot didn’t entirely set itself up as being part of the larger universe — there were no mentions of Central or Star Cities and no allusions to the Flash or Green Arrow or any of their many compatriots — the episode did give us a much more pointed and detailed look at its titular hero and the Gotham City of this world. Bear with me, because I’m going to jump around in the plot a bit throughout this recap. It was a jumpy episode.

First things first: This episode did feel like a pilot, spending almost equal time setting up Kate Kane’s (Ruby Rose) backstory as it did her Batwoman origin story and the Season 1 villain, Alice. This was probably a good idea, even if it made the whole thing a tiny bit disjointed at times. Despite the fact that the character appeared fully formed in the previous crossover, this version of Kate Kane has to spend the first episode of her new series choosing to put on the cape and cowl and become Batwoman. By doing it that way, at the very least, the writers likely spared us endless flashbacks beyond the handful required to catch us up to the here and now.

When she’s introduced, Kane is in the middle of an around-the-world training mission, attempting to make herself into some kind of super-soldier who will be worthy of joining her father’s private military force, the Crows. The Crows, meanwhile, have more or less taken over the security of Gotham now that Batman has been gone for three years. When a core member of the Crows (and Kate’s ex-girlfriend) is kidnapped by the season’s Big Bad, Alice (Rachel Skarsten), Kate returns home to help find her despite the fact that her father is none too thrilled to see his daughter back in town. 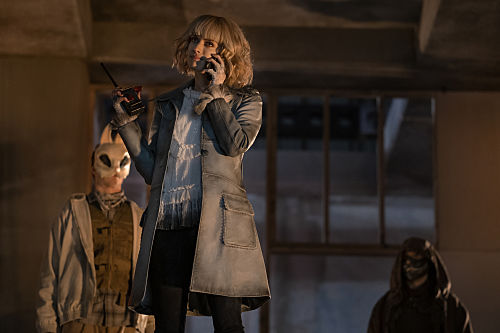 The strained family dynamics of the Kanes is one of the main points of tension on which the pilot, and likely the series, relies. After her mother and sister (twin? it's unclear) Beth were killed in a car accident that Kate survived, Kate’s relationship with her father has been distant, to say the least. She feels like he doesn’t want her around because she reminds him of the people he’s lost. So, when all the effort she has put into proving herself worthy of him doesn’t pay off, she becomes Batwoman as a means of empowering herself outside of his approval. In fact, Kate’s personal history of rejection is the larger motivator behind her decision to don Bruce’s old suit. As she says herself, she’s spent her life trying to be accepted by people and institutions that don’t want her; her father rejected her, and the military kicked her out for being gay. Being Batwoman allows her to belong in Gotham in a new and different way, in a way that strips her personal identity for the one of the Bat symbol. People love and respect the Bat. The Bat inspires and terrifies and allows her to tap into that response without the baggage of who she is underneath.

That dichotomy of perception and reality runs throughout the pilot episode. Kate is called back into town by her stepsister, Mary, who seems like she’s your stereotypical young person — more interested in her Instagram persona than in engaging with the real world and real issues going on around her. That’s the version of her that is presented at the start of the episode. But when Kate faces off with Alice for the first time and is injured, she is dropped at the doorstep of Mary’s underground clinic where she spends her time helping the sick and injured citizens of Gotham City.

Alice, herself, also represents an element of not trusting your first impression of people or events. There’s a reason she has taken on the persona of a character associated with riddles and mirrors and inside-out speech. Smartly, the show did not feel the need to hide Alice’s true identity beyond the first episode, allowing Kate to discover that the unhinged villain is actually her long-presumed-dead sister, Beth, who somehow survived the crash that killed their mother. 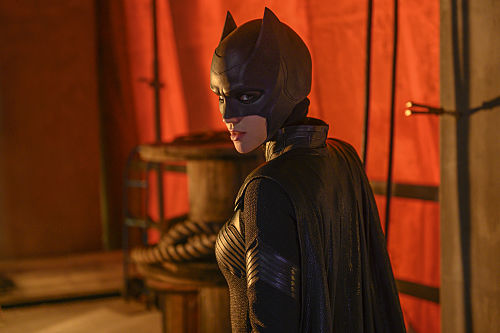 Speaking of the crash, it seems like unraveling the events of that day and what exactly caused their car to go over the bridge will be a major mystery over the course of at least a few episodes. Turns out, according to Kate’s new sidekick Luke Fox, Batman had been obsessed with figuring out why he couldn’t save everyone that day, a question Kate has also harbored, along with a healthy grudge against the Caped Crusader. Now that she knows Beth is still alive and out for revenge against their father, Kate isn’t likely to let that mystery go unsolved.

The final element of the pilot episode that bears discussion is Gotham City itself, or rather, what the showrunners have decided Gotham looks like when Batman takes off without warning. This version is somehow much bleaker than the version we’ve come to know under the watchful eye of Batman. This Gotham feels a little hopeless without him. This is a city that has given itself over to a private police force, and everywhere you look there are obvious and striking separations between the wealthy elites who are determined to go about their lives pretending things are fine and those people who live in the reality of a Gotham City where fear rules.

Sophie actually put it best back when she and Kate faced expulsion from their military academy unless they denied their sexuality and their relationship. Kate has the luxury of being offended, the luxury of telling the truth because she has a safety net to fall back on. Sophie doesn’t, which is why she chooses to turn her back on Kate in order to protect her future while Kate is rejected by two things she loves. Kate Kane is a wealthy young woman, a “female Bruce Wayne,” as her dad puts it. But the people that Batwoman protects don’t have the same luxuries she does. They barely live in the same Gotham City. It will be interesting to see if the series continues to explore those differing views of reality and privilege.

As far as pilots go, this was a pretty solid start for Batwoman, a little bit Batman, a little bit Arrow, but with an overarching narrative that feels somehow inherently female. Kate Kane isn’t a long-running hero, but her comic history still offers a lot of meat to chew on, with plenty of terrifying villains, dubious allies, and enough romantic entanglements to fill a, well, a CW show. Here’s looking forward to what this debut season has to offer.

The Flash is back, and he's brought a ton of Arrowverse heroes with him in first S8 trailer