Just in time to light the fuse on some fireworks in early July, Top Cow heads back to Bryan Hill, Matt Hawkins, and Isaac Goodhart's Edenverse with more harrowing drama unfolding in the convict haven of Eden, Wyoming.

The acclaimed original Postal series ran from 2015 to 2018 and encompassed 25 issues before the title was retired. A three-issue miniseries, Eden's Fall, followed in 2016, and two epilogue one-shots in 2018, Postal: Laura and Postal: Mark, continued the morality tales as the characters endured the grim realities of their strange western town. 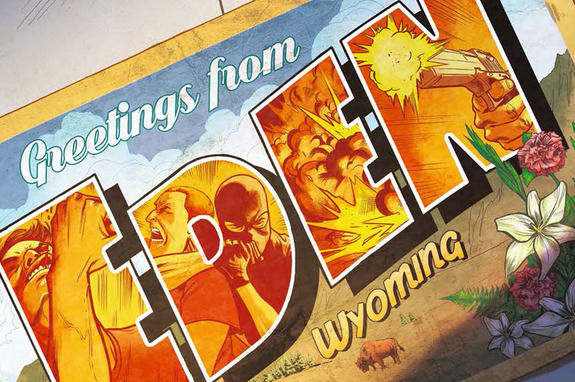 Coming July 3, a new limited-series titled Postal: Deliverance heads back to Mark and Maggie's rural noir hostilities in Eden, with Hill and Hawkins joined by artist Raffaele Ienco (Epic Kill, Batman: Sins of the Father) — and SYFY WIRE has an exclusive advance look inside, along with comments by its co-writer and Top Cow President.

The storyline finds Mark and Maggie struggling with the difficult duties of being adoptive parents, while Mark is saddled with the added responsibilities and horrors of enforcing the law as the new Mayor of Eden. All while the latest member of their tight-knit community brings his own personal war with him.

Meanwhile, Mark’s mother, Laura Shiffron, honestly attempts to enjoy her retirement in sunny Florida, but violence targets her… and violence might be the only way she can discover true peace.

"When Bryan Hill, Isaac Goodhart and I wrapped up Postal #25, we added two one-shots simply to give us enough content to fill out a 7th trade paperback," Hawkins tells SYFY WIRE. "We had planned a pretty definite ending in 25, but when Bryan and I added those extra two books we decided to make them one year later stories to see what happened AFTER 25. That creative discussion ultimately ended up with the new series Bryan is writing and it takes place five years after the end of issue 25. This is the story after the story and I'm pretty damn excited about it!"

"We chose Raffaele Ienco as the artist because he did such a fantastic job on the one shot Postal: Mark and he was available," Hawkins explains. "Could not be happier with the choice and I think people that read the original series will enjoy this...and Bryan has done a nice job of setting it up so that new people can just jump on without having to read the previous stories."

Tread lightly into our extended look at Postal: Deliverance #1 in the full gallery below, then tell us if you're prepared to venture back into Eden's evil afflictions.