Cemetery Boys is groundbreaking and just what I needed

When I picked up Aiden Thomas' Cemetery Boys, it was to support a trans writer. From the description, I knew that the story would be great and deeply trans. What I didn't know was that I was about to receive a gift of healing, understanding, and growing my dreams for trans folks in literature.

I've been struggling lately. Everything seems kind of pointless and I'm afraid for the future. Usually I can lose myself in a good book and give myself freedom from feeling the weight of my depression. But lately, I haven't been able to read. Or, I haven't been able to enjoy reading. The thing I love most has become an anathema to me.

So, when I say Cemetery Boys broke me out of a funk, please know I mean A Funk. I cracked the cover and before I knew it, I had been reading for two hours. I looked up and my partner asked me what I wanted for lunch, hand on their hip. Apparently, they had been asking for a while. I took a break to write but instead texted a friend about this great book I couldn't put down. My partner and I discussed the book over dinner.

And then I spent the rest of the day reading. I was transported to the side of a gay trans boy as he creeps through the cemetery upon which his house sits. I'm weeping when he weeps. I'm hoping when he hopes and facing down evil when he does. When he falls in love with a gay ghost who deserved better from life, I fall in love with their love.

I closed the cover at one in the morning, tears streaming from my eyes. During a time when I've been feeling a little dead inside, Cemetery Boys — a story about a boy who can summon the dead and a ghost — made me feel alive. 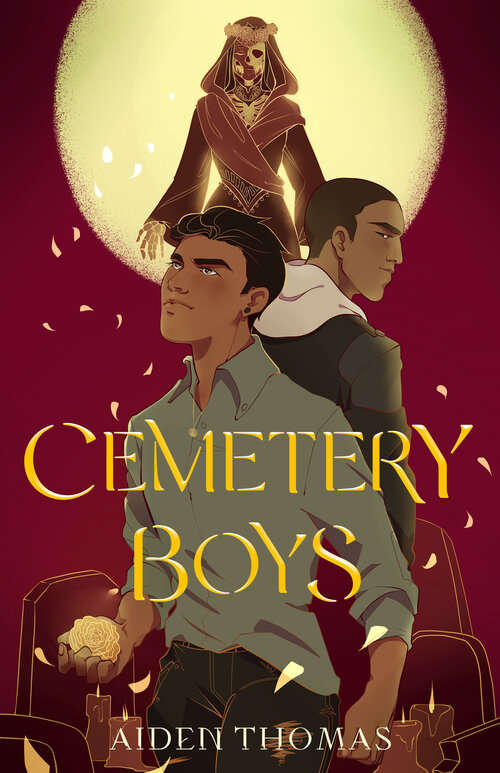 Yadriel, the protagonist of Cemetery Boys, is a young, gay trans boy trying to prove to his traditional Latinx family that he's both a boy and a brujo like all the other men in his family. He's the first trans person in his family and carries that weight proudly albeit with frustration. After he gives himself his own masculine rite of passage with his cousin's help, Yadriel uses his newly bestowed powers to investigate his cousin's murder. He summons his cousin's spirit, except — whoopsie — he accidentally summons former bad boy slash current ghost Julian. Julian is understandably shocked to find he's dead and thus begins the adventure of the book.

Yadriel agrees to help Julian with unfinished business, so he can release him and, in the process, prove he's a real brujo.

That really only scratches the surface of this exceptionally layered and complex novel. It's a paranormal romance. It's a trans young adult novel about friendship. It's a queer fantasy. It's Latinx coming of age story. It explores racism, classism, abuse, anti-trans and anti-queer sentiment, deportation, colonization, self-acceptance, self-exploration, and love. Notably, it's the first book written by a trans author featuring trans characters to make the New York Times Fiction Bestsellers list (among others). And, unbeknownst to me, it's the story I've been waiting for.

The slights and cruelties Yadriel is handed by those he loves is one of the most compelling aspects of the novel. It was overwhelming to see my own experience with how casually cruel my loved ones can be rendered so plainly and refreshing to see Yadriel reach the limit of his ability to just absorb it. His caution and fear around how his body appears with and without a binder reminded me of my own and many trans people's insecurities around our bodies.

Yadriel and Julian's love is remarkable for many reasons, but one of my favorite parts is how it is Julian who gets Yadriel to question what he knows about transness and brujx. During one of his broody speeches about how he's the first trans person and must show his family the way, Julian calls BS. He questions how Yadriel could think there'd never once in all the history of this magic been trans and nonbinary brujx. It opens Yadriel's mind and affirms that he has every right to demand respect for who he is. Their love is really something special.

Finally, what I found most powerful was the way in which the narrative itself affirmed Yadriel's transness and his masculinity, seeing him for the young man he is. I won't spoil anything, but let's just say the magics and those who bestow them know exactly who Yadriel is—even when his family doesn't.

The critical and commercial success of Cemetery Boys is important because it's an amazing story that everyone should read. It's also important because it proves what so many trans writers and readers know: There's a demand for trans stories told by trans authors.

And Cemetery Boys is very much not alone. Adult fantasy and science fiction has seen a number of powerful trans stories including May She Lay Us Waste by Moss Angel, The Undying Brew by Dane Figueroa Edidi, An Unkindness of Ghosts by Rivers Solomon, and The Four Profound Weaves by R.B. Lemberg. In genre YA, we have the remarkable books Pet by Akwaeke Emezi and Dreadnought by April Daniels. And there are smaller projects for short genre fiction like Anathema Magazine and the project I co-edit: Decoded Pride Anthology that are building platforms to launch trans authors.

Now, the success of Cemetery Boys is making way for Thomas' own future novels and hopefully, many other trans stories by trans authors as well.