We need to talk about Sabrina Spellman, folks. This morning, Netflix dropped the latest trailer for Chilling Adventures of Sabrina Part 2. The new season, arriving less than six months after the first one, looks absolutely insane.

Why do we say that? Well, it may have something to do with the trailer beginning with Sabrina (Kiernan Shipka) drenching her high school's hallways in gasoline with the clear intention of setting the entire place ablaze. From there, things get seriously rebellious as the Runaways' "Cherry Bomb" (shoutout Peter Quill) aptly plays over the action.

After her dark baptism, Sabrina's snapping peoples' necks, levitating, slaying demons, and resurrecting witches — exercising magical awesome abilities not usually seen in a half-mortal in her first year at the Academy of the Unseen Arts. As the trailer says, however, "being wicked never felt so good," and we quite agree. To underscore the punk rock-ish attitude of Part 2, the tagline reads: "High school is such a witch."

In addition to her newfound abilities, Sabrina is also grappling with a much more relatable teenage problem: Which boy should she pick to date? Will she continue to go out with mortal Harvey Kinkle (Ross Lynch), or will she choose warlock Nicholas Scratch (Gavin Leatherwood)? Your guess is as good as ours.

Still, our favorite moment arrives at the 1:30 mark when Sabrina floats down in front of the moon, holding a broomstick. 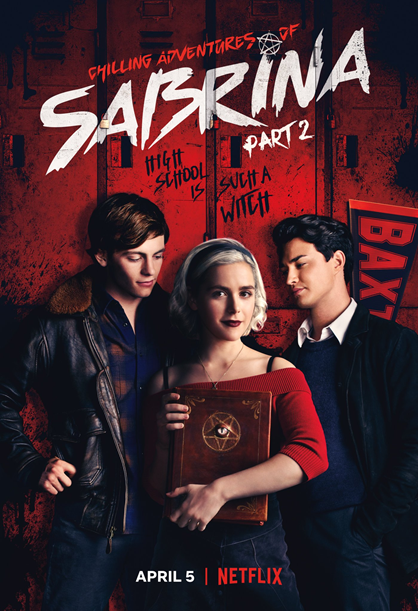 Who is that guy at the end of the trailer who purports to have given Sabrina the powers she's been enjoying of late? We can't say for sure, but it might just be the Dark Lord himself, aka Satan.

What was your favorite moment of the trailer? Sound off in the comments below!