The main characters in Deadly Class are, indisputably, villains. They're all assassins in training, destined for futures in terror groups, vicious cartels, the KGB, and, ultimately, death. And yet, the main character, Marcus, would argue that Ronald Reagan is the real villain. After all, it was Reagan's decision to cut funding for mental health facilities that led to a recently released mental patient jumping off the Golden Gate bridge and landing on young Marcus' parents, killing them.

Marcus' main goal in Deadly Class, airing on Wednesday nights on SYFY, is to one day kill Reagan. It's pretty outlandish, but compared to some of the other times that the 40th president has been a pop culture bad guy, Deadly Class is downright tame.

U.S. presidents, by their very nature, are always going to be "the bad guy" to somebody. Often that just comes in the form of political disagreement and unflattering depictions. Sometimes, it's a step beyond that, recasting an unpopular commander-in-chief as a literal lizard-person, out for blood. Donald Trump appeared as an alternate-universe version of Marvel's big-headed, small-handed supervillain M.O.D.O.K. shortly before his election, and a clear stand-in for Barack Obama goes along with the villain in Kingsman: The Secret Service, for example. The Gipper is no exception.

Deadly Class was a comic before it was a TV show, and it was able to take things pretty far in its depiction of Reagan. In part, this was due to timing. The series made its debut in 2014, after Reagan's era and during a time when extremely profane depictions of popular figures hardly raise an eyebrow. Plus, Deadly Class is published by Image Comics. The Big Two, Marvel and DC, tend to be a little more conservative in their depictions of the president. When the president appears in DC or Marvel continuity, they're generally depicted in a flattering light (or at least a neutral one). Spider-Man and Batman have real supervillains to deal with, and it's generally not in the company's interest to invite real-world controversy by making the president an outright villain.

Reagan appeared a few times in contemporary DC and Marvel comics, and while comics writers at the time would often toss in a joke or two at the president's expense, he was generally wasn't much of a villain. For example, in 1985, Marvel's version of Reagan formed a committee that stripped the Captain America mantle from Steve Rogers. However, that was only because Red Skull had infiltrated the committee, and Reagan didn't know. So, he wasn't bad, just ineffectual.

That's a pretty standard form of representation for presidents in superhero comics — well-intentioned but perhaps uninformed about the specifics of superheroics. There were several times, however, that Reagan did dip into more clear-cut villainy in both DC and Marvel comics while he was still in office.

In 1988's Captain America #344, the serpentine supervillain the Viper transforms many Washington D.C. citizens — including Reagan — into vicious snake-people. Captain America has a brutal fight with Snake-Reagan, though he's eventually able to shake of the mutation. However, a final scene reveals a human-again Reagan reassuring the public that the danger has passed, smiling to reveal two sharp, snake-like fangs. 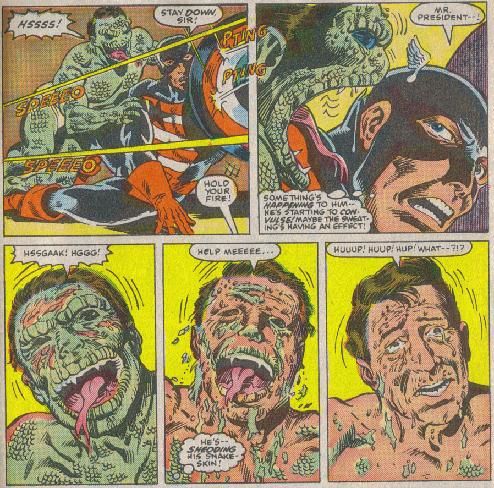 DC's villainous Reagan in 1986 was more subtle but perhaps more damming. In Frank Miller's seminal The Dark Knight Returns, a clear stand-in for Reagan commands Superman, instructing the patriotic Man of Steel to fight Soviet forces in Latin America, potentially igniting World War III. When Batman's vigilante ways make Gotham the safest city in America, Reagan has Superman take the Caped Crusader down, as his success is an embarrassment to the United States Government. 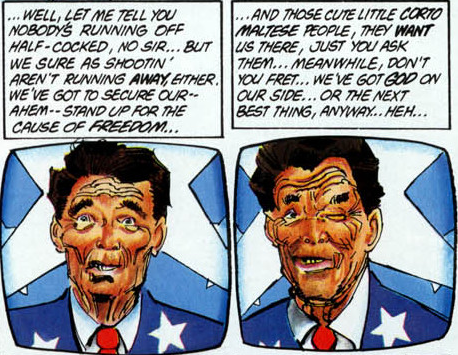 It's this later depiction that speaks more to real criticisms of Reagan as a president, rather than the comic where he turned into a snake and punched Captain America. Reagan's generally evaluated as one of the better U.S. presidents, but he faced criticism then and now for being hawkish when it came to the Cold War, and his hard-line anti-Communist stance led to invasions and funding of paramilitary organizations. During the Iran–Contra affair, Reagan's administration illicitly sold weapons to Iran in order to raise money to fund a right-wing rebel group in Nicaragua. The affair was, rightfully, a huge scandal.

On the domestic side, Reagan is now villainized for his callous handling of the AIDs crisis, the massive wealth gap in the wake of Reaganomics, increased homelessness, and gutting of mental health services, as Deadly Class' protagonist knows all too well.

Still, without both-sidesing it, there's room for debate about whether or not Reagan is a villain in any more grounded depiction of the Gipper. In shows like The Americans, Reagan is an unseen, nominal bad guy, but that's because the protagonists are two Soviet spies who are not exactly good guys themselves. If '80s America is bad from the point of view of a series' protagonist, it stands to reason that its leader is bad too.

Then there are more editorial takes on the president. In Doonesbury, a long-running comic strip that toes the line between the editorial and funny pages, Reagan's often depicted as "Ron Headrest," a computerized mashup of the president and '80s icon Max Headroom. Ron Headrest isn't exactly a good guy in Doonesbury, but calling him a villain might be a stretch. Satire, after all, has plenty of room for nuisance.

If there's one medium where Reagan was portrayed both realistically and as a clear villain, though, it's music. Vice called Reagan "the best thing ever to happen to punk rock," and they're not wrong. Ronald and Nancy Reagan, über-yuppie parodies of the '50s ideal of the American Dream, were extremely not-punk, and musicians from the opposite end of society were quick to scream "fascist" into a microphone. Bands like Dead Kennedys and Reagan Youth (incidentally the same name as Deadly Class' first comics arc) turned opposition of Reagan's politics into powerful, if sometimes funny, protest music.

More mainstream music of the time often invoked Reagan's name and policies, though often in a less inflammatory way than punk. Hip-hop, which was really just beginning to come into its own in the '80s, also made a target out of the Gipper, and some of his more infamous quotes were used as samples in anti-Reagan songs in a variety of genres.

Ronald Reagan doesn't appear as a villain much in present-day pop culture. Although there are exceptions (like a 2004 graphic novel where the tip of the main character's penis turns into a miniature Ronald Reagan head from another dimension — don't ask), most of the time when Reagan shows up, it's in a period piece. He's the boogeyman behind the '80s-set Deadly Class because he was a real boogeyman to some during that time period. It would take some contrivances to make Reagan the villain of a story set in 2019.

But, as Reagan's influence can still be keenly felt today, there's still reason to reflect on the Reagan Era, invoking a little villainous hyperbole if need be. There's a crossover crash supergroup called Iron Reagan, and several contemporary artists have mentioned the Gipper in their music, including GWAR, Kendrick Lamar, Kanye West, and Killer Mike. (Killer Mike's song "Reagan" paints the president as an especially effective villain).

As the '80s continue to be a source of retro-throwbacks and period piece settings, it seems likely that Reagan's legacy will continue to trickle down through the ages, and he'll make further posthumous pop culture appearances. It's likely that the Gipper will be a villain of some sort in some of these titles, as all presidents are to an extent. At least Reagan's fan can take solace in the many movies where Reagan is literally the hero. Being an actor has its perks.

Finish ‘Squid Game’ on Netflix and still have a blood lust? Here's 7 deadly things to check out next