What does it take to defeat the Cybermen?

Back in the original canon of Doctor Who, these emotionless cyborg zombies had a few specific fatal flaws, beyond the fact that they tended to walk very slowly and had a vocabulary dominated by the words "upgrade" and "delete." But now, in the penultimate episode of Doctor Who Season 12, "The Ascension of the Cybermen," some of the old ways of dealing with the Cybermen appear obsolete, and in one case downright mythical. By the very end of "Ascension of the Cybermen," it seems like everything we know about this group of cyborgs is about to be changed, which, in true Who fashion, has repercussions not only for the future but also the past.

**Spoilers ahead for Doctor Who Season 12, Episode 9, "Ascension of the Cybermen."**

Every Doctor Who fan can easily recite David Tennant's "wibbly-wobbly, timey-wimey" speech from the 10th Doctor episode "Blink," but let's talk for a second about what that means, at least from a practical standpoint. Basically, in a lot of Doctor Who storylines (especially recent ones) events in one time period can have a direct impact on another time period, even if none of those time periods occur in any kind of linear order. For example, in the previous episode, we met "the lone Cyberman" who had somehow time-traveled from the far future back to the year 1816, in search of the Cyberium, a kind of A.I. message-in-a-bottle containing everything the Cybermen needed to reboot completely.

This lone Cyberman was messing with the mind of famous poet Percy Shelley as well as harassing Mary Shelley, Lord Byron, John William Polidori, and Claire Clairmont. After getting the Cyberium from the Doctor, this lone Cyberman went back to the future, where he's started to rebuild the Cybermen, who, apparently, were all defeated by a group of far-future humans, which also resulted in most of humanity being destroyed, too.

So, to recap, because a cyborg stole a thing from Lord Byron's house in 1816, the future of the human race is now in peril, even though most of humanity has apparently been destroyed anyway.

If the backstory for "Ascension of the Cybermen," seems confusing, don't worry: It definitely is confusing. Make no mistake, when the Doctor tells Graham, Yaz, and Ryan that the eventual outcome of the Great CyberWar is the near-total annihilation of humanity, this is new information not just for them, but even for longtime Doctor Who fans. As we learned last week, the future history of the CyberWars spans the canon of the 4th Doctor, the 11th Doctor, and, in a very obscure supplemental video from Captain Jack Harkness, Jack himself says he "knows what happens" in the future CyberWars.

But, even though there have been numerous versions of the CyberWars mentioned, we never really got the sense that they ended up this dire. And, if you're wondering how normal-looking humans could be fighting Cybermen in the far future when this season's Episode 3 established that future-humans on Earth will turn into pollution monsters called the Dregs, look at it this way: Most future-humans glimpsed in Doctor Who — from "The Ark in Space" to "The Beast Below" — are the ones who evacuated Earth before things got bad.

The Cybermen used to be allergic to gold

Early in the episode, Yaz sets up a weapon that will shoot gold particles into the air, because Cybermen are known to be allergic to gold. This slightly silly Achilles' heel was revealed in the 4th Doctor episode "The Revenge of the Cybermen," and the tech itself is a specific modification something called a "glitter gun," which is one way aliens called the Vogans (different from the Vogons from Hitchhiker's Guide!) were able to destroy a ton of Cybermen.

Gold was also how the 5th Doctor used to defeat the Cybermen, notably in the episode "Earthshock," in which he used a gold badge worn by young Adric to kill some Cyber-baddies. Are the Cybermen still allergic to gold? Seems unlikely. One of the human refugees tells Yaz, "I heard Cybermen were allergic to gold," but you get the sense she doesn't really buy it. In essence, this episode is trying to convince us these are not the Cybermen of the 1970s. 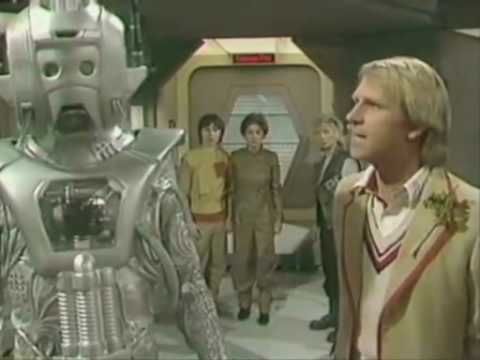 The 5th Doctor versus the Cybermen (Credit: BBC)

Well, okay. Maybe this episode does want us to think about the Cybermen of the 1970s, and that's because when a huge group of Cybertroops is discovered on board the Cybercarrier, all of them have robot-heads that evoke the style of Cybermen from those 4th and 5th Doctor episodes. Their bodies are a little more modern, but their heads are very specifically retro, referencing the design from both "Revenge of the Cybermen," "Earthshock," among others. The last time we saw a retro Cybermen in the contemporary Who canon was in the 9th Doctor episode "Dalek" and in the 12th Doctor two-parter, "World Enough and Time" and "The Doctor Falls."

The Cybermen have ... feelings now?

Without a doubt, the biggest change in this episode is the notion that the lone Cyberman is totally aware of the contradiction of being motivated not by cold, computer cyborg logic, but instead by human feelings of vanity and glory. When the Doctor calls him out of this fact, he admits it outright, which baffles her. Later, when the lone Cyberman is rallying the army of retro-headed Cybermen, he seems to use an electric shock on one of them, which freaks everyone out. Why would a Cybermen make other Cybermen scream?

The biggest advantage the Cybermen have as a race of wicked cyborgs is the fact that during the "upgrade" process their feelings are repressed. Because they can't feel pain – and have no actual desire — the defining trait of the Cybermen is that they don't have feelings. Obviously, there have been notable exceptions to this: Danny Pink fought his Cyber-programming in "Death in Heaven," Yvonne Hartman fought back as a parallel-universe Cyberman after she was converted in "Doomsday," and even Bill Potts retained her humanity in "The Doctor Falls."

But in all those cases, a converted human regaining their feelings while trapped in a Cyber-body ran against the wishes of the Cybermen. Now, it seems like the Cybermen are trying to have feelings and retain some kind of individuality on purpose.

What this means for the future of the series is unclear. A surprise appearance from the Master in the last 30 seconds of the episode could imply he specifically caused all this Cyber-time traveling, but then again, he could just be taking advantage of some Cyber-chaos to further his own plans. Which is something the Master has done before in two very recent season finales; in Season 8 Missy (Michelle Gomez) raised an army of Cybermen, and in Season 10 both Missy and a previous version of the Master (John Simm) actively used early versions of the Cybermen to try and defeat the Doctor. So just because the Master is here doesn't mean he made the Cybermen do all of this stuff. Then again, Master+Cybermen action is certainly becoming a pattern in the last few years.

Either way, by the time everything is wrapped up in the final episode of Doctor Who Season 12, we'll probably get some answers about the Timeless Child and the Master's secrets about Gallifrey. But if Who is serious about the new changes for the Cybermen, it could mean that the next time we slap the word "Cyber" in front of something, it won't automatically imply cold, soulless unfeeling death robots. If the Cybermen are getting down with emotions on purpose, then Doctor Who has made its most logical and reasonable villains into psychopathic murders.

The final episode of Doctor Who Season 12, "The Timeless Children," airs next Sunday on BBC America.