Welcome to Emmy Contenders 2019. This month, SYFY WIRE is speaking to a long list of actors, artists, and artisans whose work earned them Emmy nominations this year. Today we speak with Cynthia Summers, the Emmy-nominated costume designer for Netflix's A Series of Unfortunate Events.

The late Beatrice Baudelaire’s great gift, aside from her three remarkable children, was her ability to pull off dragonfly-themed couture — and her magnificent wings have saved more than one life in A Series of Unfortunate Events (her own, for example, when Olaf pushed her off the edge of a balcony at a masked ball; and Kit Snicket’s, when Kit took a leap off a cliff to evade the Man With a Beard but No Hair and the Woman With Hair but No Beard). These wings are both mechanical and magical — making them the one supernatural element in an otherwise real world (even if that reality is somewhat suspended).

“I think the suggestion of lightness and flight fit how Lemony made Beatrice into this otherworldly being, putting her on a pedestal," costume designer Cynthia Summers tells SYFY WIRE. "We always go back to what’s real, what’s not real, and what’s magical in your mind, since the whole story is told basically through a child’s perspective, and I think the wings really speak to that.”

The custom-made wings — fashioned out of laser-cut aluminum — are the most expensive costume item on the show, costing $20,000 a pair. This meant that there could be only one pair, no doubles, so the wings had to be protected in a special case. “I think they give a vibe that they’re heavy, they’re substantial, they’re big enough to carry the human wearing them, but they’re fragile,” Summers said. “And they’re coated with a film that gives an iridescent luster to it."

An added cost is the mounts that attached the wings to three separate outfits: Beatrice’s silver gown (seen in the VFD headquarters flashback, worn by a double); Beatrice’s hand-beaded lace gown (seen in the opera flashback, worn by Morena Baccarin); and Kit’s leather jacket (worn by Allison Williams). Summers was able to rig the wings to Beatrice by bolting them into the corsets of her gowns. But mounting the wings to Kit’s jacket proved more of a challenge, because the character was pregnant (and the actress was wearing a prosthetic belly), and because the character would fly (and the actress needed to do wirework). 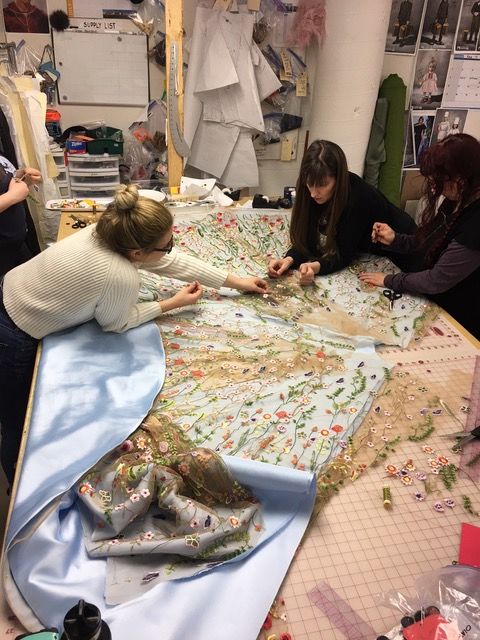 “That was a nail-biter for me,” Summers said. “Morena was just doing an operatic pose, staying static, but Allison had to do a stunt, so we had to rehearse how high she could go and how the wires would work with the wings.”

Another complication: The wings needed to be hidden, to pop out only after Kit dove off the cliff. Since the pregnancy belly wrapped around the actress’ waist to the back, Summers couldn’t cut into that to secure the mount. She had to incorporate it underneath the belly so it came through the T-shirt and then through the jacket, and then she had to hide the hole in the leather jacket. The mechanism allowed the wings to move up and down about two feet, although we only get to see how they work when Kit goes hang-gliding during her escape.

It’s been especially gratifying for Summers to see that cosplayers have been inspired by this element of the show’s costumes, and are making their own dragonfly wings. “They’re remarkable,” she said. “Really beautiful. I think that means we did an okay job on this!”

Emmy Contender: How Good Omens designed 6,000 years of costumes for Aziraphale and Crowley

10 hours ago
See All Posts
Editor's Picks
Get Tickets