The blood and dust of the Western genre has undergone a bit of a revival of late, not only in Hollywood features like The Hateful Eight, Hostiles, and The Magnificent Seven, but also in hit TV series like HBO's Westworld and AMC's Hell on Wheels.

Comic books, once the haven of gunslinging titles like the Rawhide Kid, Tomahawk, Jonah Hex, and The Lone Ranger, have also benefitted from this resurgence of interest in yarns spun from lawless frontier towns portraying morality tales of good versus evil. 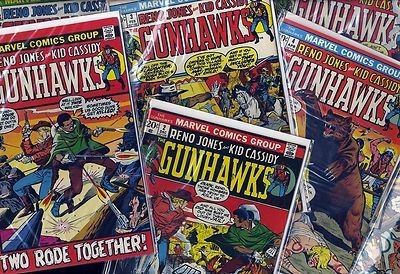 As part of their ongoing 80th anniversary celebration this year, Marvel Comics is resurrecting one of their classic Old West stallions from the '70s, Gunhawks, and SYFY WIRE has an exclusive peek under the saddle to spur your interest.

Marvel's original Gunhawks ran for just seven issues from 1972-1973 and showcased the rip-roaring action of Reno Jones and Kid Cassidy, two friends who had fought together for the Confederate Army during the Civl War. This new one-shot written by the Eisner Award-winning team of David and Maria Lapham (Stray Bullets) with gritty, gorgeous art by Luca Pizzari is born from the wild spirit of this adventurous Bronze Age title and centers around a story ripped from the guts of the era of legendary cowboys, rustlers, lawmen, and outlaws.

SYFY WIRE chatted with the Laphams about strapping on the gunbelts for their ride into the pages of the Old West for "The Ballad of Deadman Donnelly," their inspirations for this bloody tale of revenge, how they researched the subject matter and period, and thoughts on the Western genre as a rousing staple in comics.

What roped you in to this Gunhawks revival for Marvel's 80th birthday?

David and Maria Lapham: Obviously we are known for our domestic noir, Stray Bullets–But it's fun to switch it up, and Western movies of all kinds from High Noon to the Wild Bunch are favorites. When we started talking to editor Jake Thomas about working together, this project seemed perfect.

In preparation for writing the book, what sort of City Slicker-like research did you immerse yourselves in?

That's funny – we are the real-deal City Slickers! We both were raised in the shadow of NYC and then spent most of our adult lives in LA. A few years back, after having kids, we moved to Carefree, AZ. We live in the actual Wild West. We traded traffic for coyotes, bobcats, and giant saguaro–and never looked back.

Luca Pizzari's atmospheric art truly captures the flavor of the Arizona landscape and its colorful characters.  How did the collaboration process work?

We try to be as descriptive as possible in the script, and we sent up some photos of setting, but comics are a visual medium and you have to give an artist like Luca the room to do his thing.

Why does the artistic landscape of the West endure and what has allowed it to stay fresh as a canvas to tell compelling tales?

The West was, is, and always will be the ultimate study in contrasts–hot/cold, rich/poor, good/bad. As a storyteller, what more could you ask for?

Do you anticipate returning to this title as a possible ongoing series or was this Gunhawks one and done?

It was conceived as a single story, but you never know!

Check out our exclusive 4-page preview of Marvel's Gunhawks #1 in the galley below, then tell us if you'll herd it into your pull shelf when it gallops into stores Feb 6.