Superstar writer Kieron Gillen (DIE, Star Wars: Darth Vader, The Wicked + The Divine) is steeped in the lore of classic superheroes, and for his latest project one of comics' most charismatic crusaders will fly again when Dynamite's Peter Cannon: Thunderbolt #1 soars onto the stands next month. SYFY WIRE is delivering an exclusive chat with Gillen and an early look at its interior pages and variant covers.

Written by Gillen, with dynamic art by Casper Wijngaard and Mary Safro, and lettering by Hassan Otsane-Elhaou, this revival series chronicles our planet at war after a devastating extraterrestrial invasion, with the notorious crime fighters of three nations recruiting jaded super-genius Peter Cannon into their defense plan. 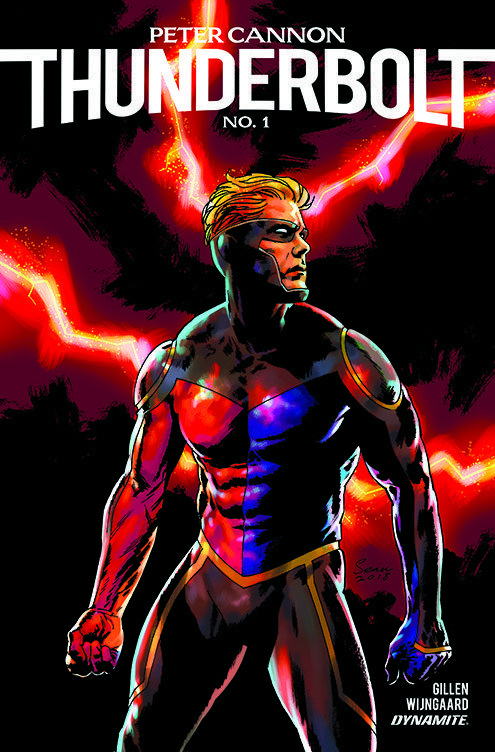 Peter Cannon was first created by cartoonist Pete Morisi in 1966, and the striking Silver Age character’s adventures were initially published by Charlton Comics, then later in a 12-issue run by DC Comics, before relocating to Dynamite in 2012 for a self-titled series written by Steve Darnall and Alex Ross, with art by Jonathan Lau. Raised by his medical team parents in a Himalayan monastery before being orphaned, Cannon was taught to unlock the full potential of his mental abilities via the secret knowledge in a set of ancient scrolls.

This highly advanced, reluctant superhero was the inspiration for Alan Moore and Dave Gibbons' megalomaniacal villain, Ozymandias, in their seminal Watchmen series, as played by Matthew Goode in the Zack Snyder feature.

Gillen reflects on how he arrived at this resurrection project with Dynamite, and how the underlooked character piqued his interest and became something he could really have fun with.

"I was chatting to Dynamite Nick — which is how I like to think of him — about doing a book with him," Gillen tells SYFY WIRE. "We were going through the list of characters, and hit on Peter Cannon, and it was a moment of leaning back and nodding thoughtfully. He's an interesting one. The mix between being an obscure character who has cast a long shadow across the industry, a character that's owned by his creators' estate from an era where that's incredibly rare, and a really prickly actual personality."

Regarding the meta importance of Watchmen in this fresh series, Gillen gladly acknowledges its essential inclusion.

"Oh, there's a lot here, born of my love of Watchmen and a frustration with the primary parts of its influence," he admits. "It's like if everyone loved Daft Punk but the only thing they lifted was wearing robot hats on stage. Like ... that? That's what you take? So taking a character who influenced Watchmen and then using him to examine Watchmen's influence seemed a useful angle. Let's look at the superhero comics, how we've got here, and what we can do with it."

Similar to his work on Marvel's Young Avengers, Gillen helped gather this creative dream team and aims for the title to be the most gleeful, playful, and smartest superhero comic on the shelves every month.

"Everyone in the book are people we've chosen," Gillen adds. "I talked Caspar into it outside a con in London. He hunted down Mary. I hunted down Hassan. It's like a heist movie. Or a superteam. It does feel a lot like being in a superteam.

"The scripts are detailed — it's a book about Watchmen-esque formalism, so that's no surprise — but with that backbone, there's so many moments of inspiration and play on it. How to take this panel? What lighting effect? How about lettering choices? Everyone's really jamming."

Check out our early look at the premiere issue in the gallery below, then tell us if you'll jump on board this latest iteration of a complex vintage character when it strikes Jan. 30.

Ash Williams blasts back to the disco era in first look at Dynamite's new 'Army of Darkness: 1979'