The opening pages of SFSX read like a queer, sex-positive dream. The wide range of human sexuality is on display with couplings and groupings that run the gender expression gamut. A neon sign proclaims that you've entered The Dirty Mind. And as the art shows an orgy in motion, a religious organization known as The Party breaks down the doors, wielding batons and shotguns and declaring they're "here to rescue you from yourselves." The event is broken up and as half-naked people are beaten and dragged by their hair, our narrator and her future-husband escape in their underwear, running through the night toward freedom. The juxtaposition of The Party and the sexy overall narration tells readers they're in for an adventure.

Over the course of the seven-issue arc, we follow the narrator of the opening pages, Avory, as she grapples with her new life after the Party destroyed The Dirty Mind and arrested their leader, Jones. Avory and her husband George have chosen to assimilate, to hide among the buttoned-down and the complacent. Not surprisingly, she finds herself at odds with her old friends who have kept The Dirty Mind alive for the last three years, unbeknownst to The Party. When George is arrested, Avory turns to the Dirty Mind crew for help and though they're reluctant at first, they decide to recover not just George, but Jones, too. 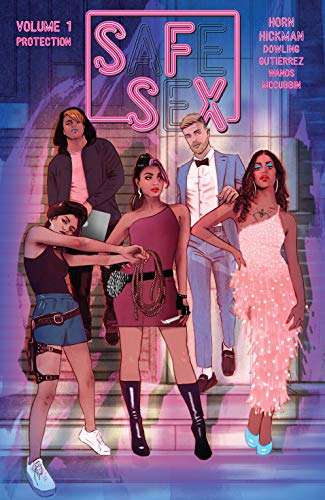 Part-heist, part-fascist hellscape, and one hundred percent sexual revolution, SFSX is unlike any comic you've ever read—and you're going to want to pick up the trade paperback edition that recently came out. To celebrate this delightful occasion, we're sharing exclusive images from the new release.

Volume 1: Protection, which collects all seven issues, also includes new material. In addition to a stellar introduction from sex workers' rights activist, historian, and writer Morgan M. Page, the trade paperback collects exclusive back matter, original commentary unpublished elsewhere, concept sketches, process porn, images from the merchandise photoshoot, concept art from artist Alejandra Gutierrez, and so much more. What is probably most gripping about the volume to creator and writer Tina Horn, however, is that "it was always created to be a cohesive arc with a cohesive story. Every single character's arc is building over the course of seven issues." And she can't wait to hear what readers have to say about the work as a whole so far.

The scaffolding of sex work in comics

Generally, the representation of sex work in comics has been, well, terrible. 1989's Catwoman: Her Sister's Keeper delved into Selina Kyle's history with sex work, but despite having some highlights the miniseries has an overall muddled message that results in Selina leaving sex worker and child Holly at a convent. In the '90s and early aughts, there was a flurry of sex worker representation in Sin City, From Hell, and Uncanny X-Men, but it's safe to say that, collectively, those works didn't do any favors to sex workers, but instead fall into harmful tropes like the hooker with the heart of gold and much worse. 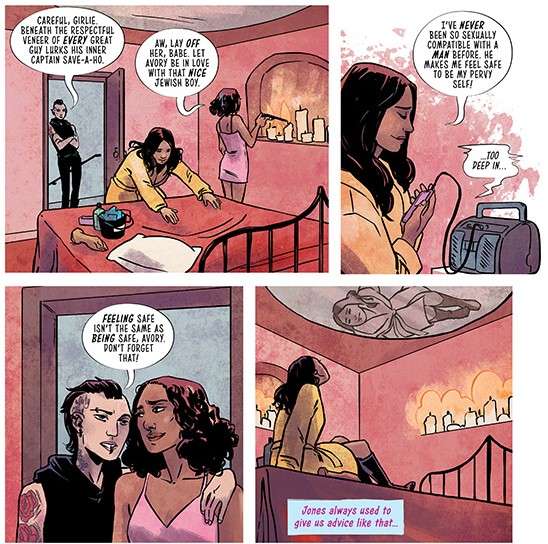 SFSX tackles real-world issues for sex workers, queer and trans folks, and others who live outside of the mainstream socio-cultural structure—while spinning a tale fundamentally about power. The story interrogates the locus and direction of power while portraying a group of people frequently maligned in popular culture.

"Power is the lens that I view everything through," Horn tells SYFY FANGRRLS. "I'm asking myself in every scene in every panel in every issue in every page: what is the power dynamic between the characters in this scene?" It comes through in how the characters are framed in panel, who makes eye contact with whom, characters' postures, and in the cadence and amount of dialogue spoken.

Horn thinks she may be more attuned to power dynamics because of her work as a professional dominatrix. "There's lots of layers: There's the scene you're doing with the client, the existence of sex work, the gender of both the client and worker, the fact that money is involved—all of that makes power flow in different directions. I'm very practiced at identifying all of those things in a split second and figuring out how to be entertaining." And SFSX seems to be a perfect example of what Horn means. "The scaffolding of this story and the skeletons of all these characters are created out of power and power dynamics."

It is that very utilization and awareness of power dynamics that sets SFSX apart from most other comics that feature sex workers.

Spoiler warning for SFSX Issues #1-7 ahead.

Another differentiating factor is how Horn has chosen to root the story and characters in the real lived experiences of sex workers and queer and trans folks, as well as her own fears. Much of the rhetoric wielded by The Party against sexuality and sex-positivity echoes real-world arguments against trans and queer folks and sex workers, referencing protecting children and saving people from themselves. Several characters are subjected to torture used in conversion therapy. One of the leaders of The Party is a white feminist while another is a white cis gay man, and both believe that if they can just fix those bad people over there, there will be a place for women and gay men in the pure future they imagine — only to find respectability hasn't gotten them anywhere. It's truly chilling.

Perhaps the most horrifying element is the treatment of Jones, the former leader of The Dirty Mind-turned-believer. When Jones is apprehended by The Party, she is subjected to torture and brainwashing for years. Eventually, they break her and she begins toeing the party line… literally.

All the more so are the questions Jones' betrayal begs of the reader, according to Horn. "We all want to think we're smart enough to outsmart the beast and withstand brute force or psychological torture. We think, 'I would get out of that.' But I wanted to make it hard and complicated for people reading this. Could you withstand what Jones had to go through? I want people to have the humility to realize they could fall for this because people do in real life."

What do you do when your friend is no longer your friend? Well, SFSX answers that question pretty loud and clear when Jones comes face to face with her ex Silvia who has been keeping The Dirty Mind and hope for Jones' return alive. (You'll just have to pick up Volume 1 to find out what happens.) 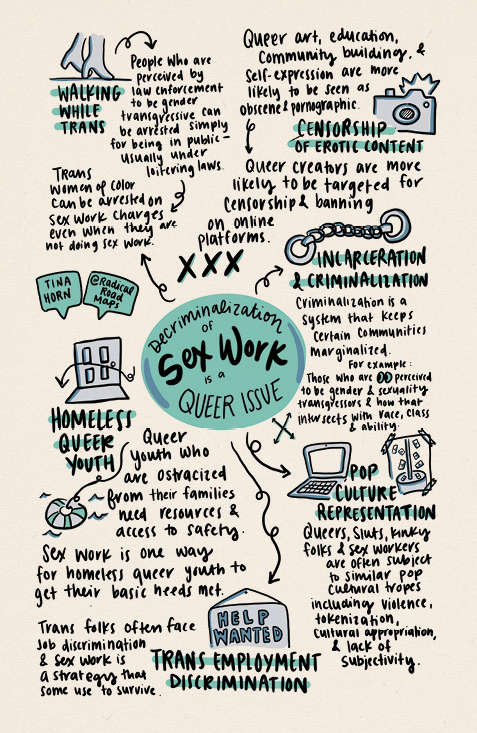 Much in the same way that the story itself weaves together real lived experiences and science fiction elements, both the individual SFSX issues and Volume 1 pair the story of The Dirty Mind with material based in reality, including interviews with sex workers, mix tape-style playlists, and other interactive and educational elements. (Some elements only appear in either the individual issues or the collected volume.)

"I wanted [readers] to get through an issue and think, 'Oh this is what people are talking about when I peripherally hear about sex workers' rights,' or 'This is what they're talking about with the supreme court ruling about trans employment discrimination," Horn said. "These are the real lives and the real stakes for people I can see myself caring about.'"

Having back pages to fill was a dream for Horn, who came up in zine and mixtape culture. "I made lots of zines about sex work before I was ever published anywhere. Even when I was producing and directing porn, I was just as interested in interviewing the performers before and after their scenes about sex and power and gender and video art and creativity. That's just what I do. If there's a space to fill, the first thing I'm going to say is 'What about if we elevated the voices of sex workers? What if we gave the platform to IRL sex workers?'"

By weaving together so many different elements, art styles, aesthetics, and voices, Horn and her team have created a multifaceted, multi-directional representation of sex work that embraces varied experiences and lenses without losing its heart. "The whole thing is an archive of so many different artists and ideas [focusing on sex work] at this moment in time."

That might be the very best part of SFSX: it effortlessly captures the feeling of this revolutionary and terrifying moment in time while centering the voices of the most marginalized. One panel is filled with horrifying manifestations of our worst nightmares, the next shows people stepping up and fighting for their freedom in unexpected ways. SFSX also realistically frames our wins, respecting that no matter how many things go right our victories exist against a backdrop of suffering and loss that is neither redeemed nor erased by the victory. The recognition of that reality honors the struggle of being alive in this imperfect, hate-filled, beautiful, wide world.

The Boys: Full trailer for Season 3