Representing an earlier, previously unknown evolutionary branch of the theropod family, Brazilian paleontologists have recently revealed the discovery of a new genus and species of coelurosaurian dinosaur, Aratasaurus museunacionali, unearthed from the fertile excavation site of the Romualdo Formation in the Araripe Basin, Brazil.

Details on Aratasaurus and its existence during the Cretaceous period some 115 million years ago were unveiled in a fresh study published in the online journal Scientific Reports. The new raptor-like dinosaur is being classified as a coelurosaur, a diverse group of diminutive, lightly framed theropods that are more closely related to birds than to carnosaurs, hence its feathery attire.

These specimens represent a partial skeleton dug up from the famous Romualdo Formation, considered by most scientists around the world to be excellent hunting grounds for intact prehistoric fossils. The primeval remains were protected in a layer of dark shale originally measuring in at 3.9 X 2.6 feet, and carrying a thickness of approximately 1.2 inches. 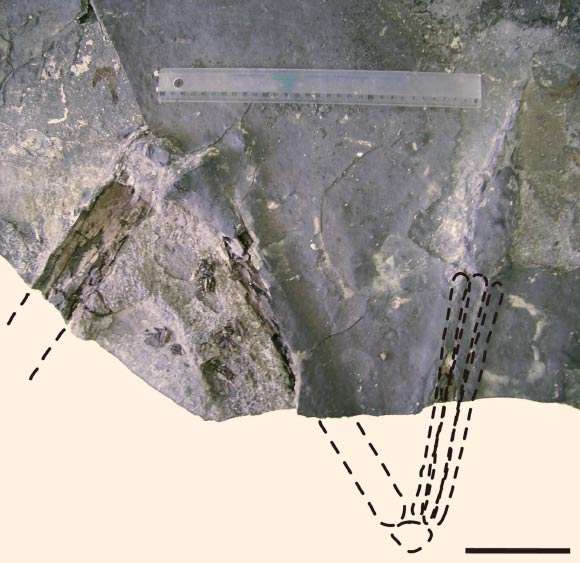 “Aratasaurus museunacionali is known by an incomplete but articulated right hind limb with the distal portion of the femur, proximal half of tibia and incomplete pes [Latin for foot],” explained senior author Dr. Alexander Kellner from the Laboratory of Systematics and Taphonomy of Fossil Vertebrates at the Museu Nacional/Universidade Federal do Rio de Janeiro.

Exposed bones showed that this Aratasaurus was just a youngster, likely about four years old, with an estimated body somewhere around 10.2 feet long and tipping the scales at about 75 pounds. This feathery Brazilian predator is a close cousin to Zuolong salleei, another extinct coelurosaurian dinosaur that made Jurassic Period China its home 160 million years ago. Its official name is a combination of “ara” and “atá” from the native Tupi language, meaning "born" and "fire."

“The material known from Aratasaurus museunacionali differs from derived coelurosaurian groups (e.g. Tyrannosauroidea, Ornithomimosauria) and Megaraptora mainly regarding by the cnemial crest and the disposition and morphology of metatarsals,” the paleontologists noted. “Among basal coelurosaurs, the new Brazilian theropod has a tibia similar to that of Zuolong salleei, and the pes more similar with that of Aarun zhaoi and Tanycolagreus topwilsoni.”

This new carnivorous taxon indicates the first known presence of basal coelurosaurians in Brazil's Araripe Basin and leads to the conclusion that the group was scattered far more widely than initially believed during the Lower Cretaceous.