From ancient castles to the treacherous precipices of its weathered coastline, Northern Ireland’s sublime beauty makes it a theater of dreams for any imaginative fan of medieval fantasy. Interlocking trees stand watch over shadowy groves, and the clear water of the Irish Sea is magnanimously juxtaposed with the scabrous rocks that waylay the encroaching tides.

It’s no wonder, then, that Northern Ireland is one of the main locations in Game of Thrones. As you walk along winding paths and allow yourself to be swallowed up by otherworldly forests, it’s easy to imagine Jon Snow meeting you to discuss urgent business about the Army of the Dead. In order to delve as deeply as possible into the intertwined existence of Northern Ireland and Westeros, I went on a 15-hour, 400-mile road trip.

My first stop was at Castle Ward, the 340-hectare walled demesne used as the location for Winterfell in Game of Thrones. Although the estate features a juxtaposition of Palladian and Gothic architecture, the parts we mostly see revolve around the bountiful battlements of Old Castle Ward.

Old Castle Ward’s farmyard is home to several iconic filming locations. Here stands the tower Jaime Lannister pushed Bran Stark from in Game of Thrones’ pilot episode — which you can climb, but alas, only via dimly lit, narrow staircases — as well as Winterfell’s archery range, perhaps most prominently remembered for the scene in which Arya outperforms Bran in front of their parents.

The farmyard was also used as the set for the arrival of King Robert Baratheon in Season 1, and although Winterfell is largely a product of CGI, Old Castle Ward’s towers stand tall and proud alongside their green-screened extensions during the Protector of the Realm’s regal approach. The entire area is one and the same as Winterfell, which makes exploring its propless courtyard an eerily curious phenomenon, as if this actually was Winterfell in the past and now we’re treading the ancestral ground of spectral Starks.

Although Old Castle Ward was used for Winterfell, it wasn’t the only filming location in the Castle Ward estate at large. After walking through the old castle’s farmyard, I found myself on a woodland trail, painted brown and green by the hues of trees and dirt. Here stood ancient Weirwood trees, their knobbly, bulbous faces marking them as a source of awesome magic.

All around the woods were meticulously overgrown; gentle branches lurched, inched forward to frame a naturalistic promenade, paved as if superimposed onto the forest’s arteries, guiding you directly to its beating heart. It was here that Brienne of Tarth confronted the Stark men who had killed a group of young women. It was here that Brienne of Tarth avenged these fallen innocents, before affording them the proper burial they deserved after a death they didn’t.

As you emerge from a deluge of stupendous foliage, you’re hit smack-bang with the dominant presence of Audley’s Castle — or, as Game of Thrones fans might know it, one of Walder Frey’s Twins. The front of the castle is fiercely guarded by a drove of cattle, inconspicuously grazing alongside one of the most tactical strongholds in Westeros. However, if you take a little shortcut through Audley’s Wood, you’ll arrive at the back of the castle, which has a sure shot route right up to its front door.

As well as the castle itself, the surrounding fields appeared in Game of Thrones, most notably as the sets for Robb Stark’s War Camp and the Battle of Oxcross, where Robb met the Volantian healer, Talisa. It was their love that ultimately led to the Red Wedding — which also took place at The Twins — after Robb eschewed a political promise of holy matrimony for true love.

After exploring the estate for a while longer, and seeing the fields that served as sets for Ned’s picnic with Robert Baratheon and Tyrion’s victory at the Battlefield of Baelor, I decided to press onward on my Westerosi odyssey. My next stop was Saintfield, which is a suburban town just south of Belfast. Although it doesn’t quite have the same Thronesy ambiance as Castle Ward, Saintfield is actually home to two of the most iconic episodes in Game of Thrones history — in television history at large, actually.

If you venture along the twisting backroads that jut out from Saintfield’s center, you’ll be surrounded by hundreds of massive fields, all blending into a gargantuan amalgamation of shades of green. None of these are signposted, so it’s impossible to tell which piece of this elephantine puzzle is the right one, but these fields are more than just ordinary meadows. They’re battlefields — specifically, the battlefields upon which the Battle of the Bastards and the Battle of Winterfell were fought.

It’s strange to look at them and consider how normal they are, empty aside from a few barns and farmhouses. However, with a little bit of imagination and a lot of CGI, these wide-open plains were transformed into grueling battlefields, filled with direwolves, giants, and White Walkers. Perhaps all director Miguel Sapochnik needed was an unendingly expansive area, capable of holding tens of thousands of sanguinary soldiers. 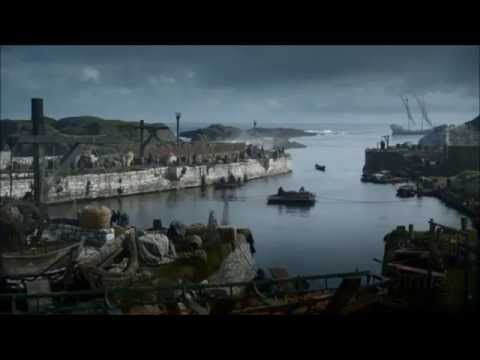 After finishing up in Saintfield, I beelined to Ballintoy, a village located on the northern coast of Northern Ireland. I already knew which locations had been filmed at Ballintoy, but even without any prior knowledge, you’d recognize its stony beaches from a mile away: Here lie the Iron Islands.

The water here is marvelous, reflecting the sun’s incandescent rays as it alternates between shimmering and smashing against the weather-beaten rocks sporadically dotted around the shallow parts of the sea. I ventured along the uneven rock-paths in order to experience the beach in its full glory, and was surprised to see a flock of beach sheep, soaking in the salty sea breeze along the mossy cliffs. These were the Ironbaaa-rn.

A plethora of scenes were filmed at Ballintoy Harbor. Euron Greyjoy was baptized and reborn in the eyes of the Drowned God here, and it was here that Theon arrived on his return to his homeland, Pyke, and met his sister, Yara. However, Ballintoy was also used as a set for parts of Dragonstone; Jon Snow alighted his ship on this very beach, and Stannis’ armies were based here until they traveled north to aid the Night’s Watch at Castle Black. 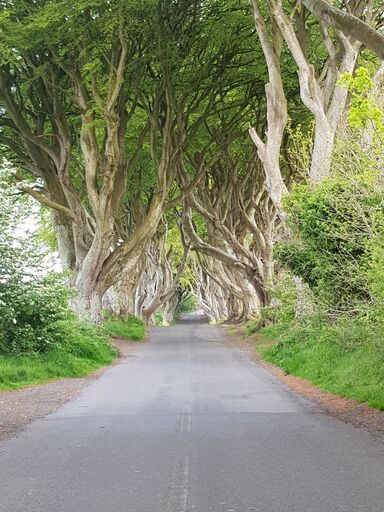 Feeling refreshed after inhaling the invigorating essence of the sea breeze, I journeyed to my final location for the day: The Dark Hedges. I arrived as the sun started to make its gradual descent in the distant west, the dying light enchanting these mysterious hedges and imbuing them with ancient magic, incomprehensible to the mortal mind. It was here that Arya and Gendry traveled together along the majestic Kingsroad, and here that Ned Stark’s party journeyed southward to King’s Landing.

The trees here seem to have been designed by some divine machinations, as they exist in a harmonious and perfect society. The juxtaposition of their beauty with the sunset and mysterious Dark Hedges makes them seem as if they’re more Westerosi than worldly; perhaps we borrowed them from their world, as opposed to vice versa.

This marked the end of my odyssey across the lands of Westeros and Northern Ireland. After seeing Winterfell, the Iron Islands, Dragonstone, the Kingsroad, and two of the most illustrious battlefields in Game of Thrones, I realized that even after HBO’s behemoth show ends, Westeros will forever be alive in the sublime landscapes of Northern Ireland — or, to put it in Game of Thrones terms, the real North.