Get Rec'd: Six SFF books to refresh your August

Photo by Hitoshi Suzuki on Unsplash

Life in quarantine can feel pretty cyclical, what with the never-ending dread and doom scrolling. But I am a firm believer in doing whatever you need to do to simply get through the day. The right book really can make a difference. Sorry not sorry for sounding like an after-school special because it’s true. Escapism shouldn’t be limited to the screen. With August’s rising temperatures, plus, you know, the pandemic, do more than one good thing for yourself. Pair a book with your favorite iced beverage.

Laura Lam (Goldilocks)  and Elizabeth May (The Falconer) have teamed up to co-author the Seven Devils duology. Book one follows seven resistance fighters who will do everything in their power to free the galaxy from the Tholosian Empire. This has vibes of Guardians of the Galaxy meets Rogue One. Eris tried to leave her life as Tholosian heir behind, even going as far as faking her own death. Instead, she’s recruited by the Resistance. Her mission, which she definitely chooses to accept, is to infiltrate a spaceship with a deadly cargo. Making a tricky situation worse is her partner: hotshot pilot Cloelia who for sure has a grudge against Eris. The reluctant teammates discover not just the cargo, but three refugees who can turn the tides and bring the empire to its knees.

The Disaster Tourist by Yun Ko-eun is a feminist eco-thriller about Yona, a woman who works for a travel company that specializes in vacation packages to places devastated by disaster and climate change. To put distance between Yona and a predatory colleague, the company — Jungle — offers Yona a paid “vacation” to the desert island, Mui. Yona must determine if Jungle should keep working with the unprofitable country. Things are so bad even the resort is attempting to fabricate a natural disaster to get Jungle and their clientele back, while Yonas' discoveries put her and everyone involved in danger.

A novel about dark tourism seems especially apt as July of 2020 saw 33 countries ban or restrict non-essential U.S. travelers from entering. The thing about stories that hit so close to home is that sometimes you have to lean into it. At the very least, this social commentary offers a controlled setting and searing social commentary to funnel your rage.

Tamsyn Muir swept the SFF world in 2019 with her debut Gideon the Ninth. Muir is back with more lesbian necromances in space. The companion, Harrow the Ninth, follows a character from book one. This time Harrowhark Nonagesimus, the last necromancer of the Ninth House, must survive a haunted spaceship. Drafted to fight a war she might not be able to win, Harrow still trains to become the angel of death she was meant to be. But her physical and mental health is betraying her. Locked away with nothing but her teachers and a ghost (space ghost!), Harrow is in for a reckoning.

A gothic space adventure? Take me away!

If you’ve ever found yourself wondering what became of Robin Hood and Marion, Carrie Vaughn has a couple of novellas for that. The Heirs of Locksley is a companion novella that continues the adventures of Robin Hood’s kids. But this isn’t the old Sherwood Forest. King John is dead, and his 13-year-old son gets crowned King Henry III. Present at the coronation is John, Eleanor, and Mary (AKA the heirs of Locksley). John of Locksley, the son of the legendary archer, befriends the new king, who has a new rebellion on his hands. While doing so, he uncovers a political plot that will take all the Locksley children to rally. This is perfect for a short but fun nostalgic adventure. 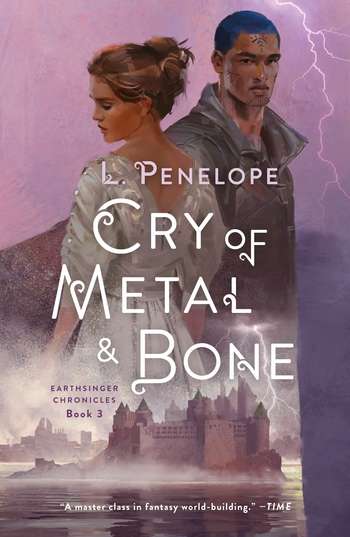 Romance fantasy fans hear my call: Read the Earthsinger Chronicles by L. Penelope. This series has the epic proportions of A Darker Shade of Magic, plus romance that tugs at your heartstrings, and an original mythos that pits the lives of men and gods together. It’s. So. Good. The first two books in the quartet are available so I’ll wait… Warning: spoilers may abound from here on out.

Following an earth-shattering event, the nations of Elsira and Lagrimar struggle to unite. They’ve been enemies for centuries, and factions that oppose the unification crop up with threats of more attacks. An unlikely team is assembled to investigate the threat. Among them are Lizvette Nirall, a disgraced socialite searching for redemption, and Tai Summerhawk, a smuggler holding fast to a promise. This is everything I love. L. Penelope is a force to be reckoned with and I can’t wait to see what she has in store.

Sometimes you need to read a really beautiful fairy tale. For that, I present the Greenhollow Duology by Emily Tesh.

Book one, Silver in the Wood, introduces us to Tobias and Henry. Tobias, who is tethered to the forest and lives a quiet existence. Henry is the handsome new owner of Greenhollow Hall. It’s magical. It’s queer. It’s the perfect novella to whisk you away to the dark heart of the woods. The sequel, Drowned Country, continues Henry and Tobias’s story, in a grimy seaside town that drowned a once ancient woods. A missing girl, a monster on the loose, and an unresolved love story collide.