The week before Christmas, I was sitting on my couch, texting with a friend I planned to see in L.A. I was heading there the next day for a Behind the Panel-related shoot. Our exchange was interrupted by a phone call.

My mother had been hit by a car. She died almost instantly, I was told.

That doesn’t make it easier, in case you're wondering. Not in the slightest. 74 years of a life full of peaks and too many valleys for someone of such strong character ended just like that. The suddenness rattled me far worse than anything else I've experienced. Anyone who's experienced a similar tragedy I think can relate to that feeling.

Reeling from everything, including the horrible but necessary process of arrangements and making sure my kids understood why grandma would no longer babysit them on Saturdays, I did what I've always done when I needed a break from reality: I read comics. Fortunately, my To-Read pile is always ridiculously high, because the guy who writes and talks about comics for a living never has enough time to read all of them.

I made the time and dug into various comics that I picked almost at random. They included Valiant's latest The Visitor from Paul Levitz and MJ Kim. A great launch for a sci-fi mystery, and the fact one of the main characters, U-N security ace Talia Dauber, shares the same name as my youngest daughter is an added bonus.

I also finally read the first issue of Brian Bendis and Ryan Sook's revival of Legion of Super-Heroes for DC Comics and while I've always been confounded by the Legion's dense continuity (please don’t @ me to Legion-splain me), this was as fun a first issue of a Big Two comic as I've read in a few years.

Finally, I figured I needed to see how Tom King's epic tenure on Batman would wrap up. As someone who has mostly loved King's attempt at discovering if the guy known as the Dark Knight can actually be happy, I was curious how "City of Bane" would conclude and how it would pay off all those story threads laid out over the past few years. As is my recent custom, I was several issues behind ... which is sometimes nice, because who doesn't like a good comics binge?

The first issue I had to read in my Batman catch-up? Issue #83.

SPOILER WARNING for those who haven't read it yet...

Those of you who have already read Batman #83 know just how spectacularly bad a choice this particular comic is for someone trying to take his mind off of losing a parent. Why? Because it's the issue where Batman discovers that Alfred is dead.

We saw Bane snap Alfred's neck back in issue #77, but if we're being honest, who didn't think there would be some workaround to bring him back to life? Because, well... comics. And this is Alfred, for goodness' sake. Batman without Alfred is harder to imagine than Batman without Robin. But by the double-page splash in issue #83, we know it's real. Alfred, the dedicated butler and loyal friend, was gone. Bruce Wayne had lost the man who had been his father for most of his existence, and he reacted as such. Mikel Janin's artwork showed a Batman I’ve never seen before, but instantly recognized. Because that anguish, that desperate helplessness he's exhibiting while holding Alfred's lifeless body is exactly how I felt sitting outside the hospital room where my mom died. The tears, too. 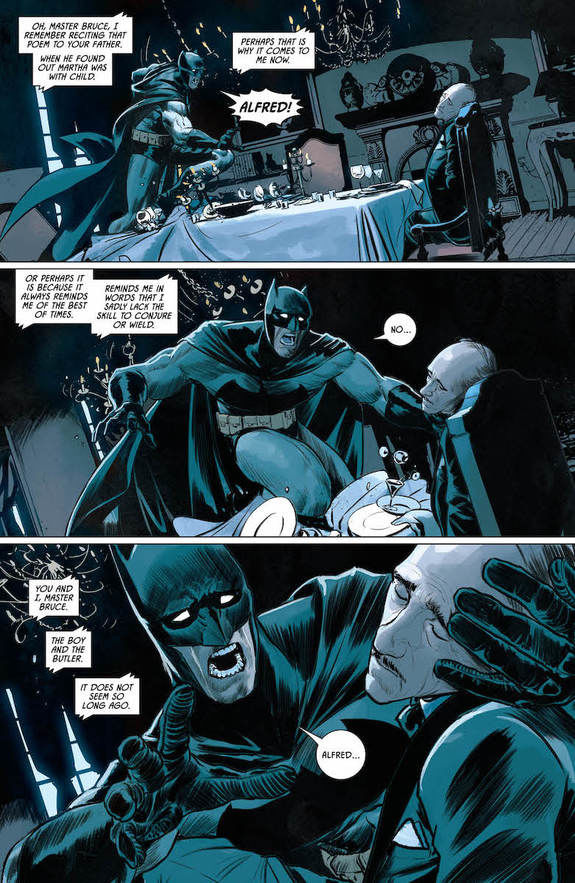 I cried all the way through reading this comic, silently cursing King for his words that cut me to the bone. Alfred reminded me of my mom in that he gave his life so Bruce could possibly start to live his. That was the type of person my mom was. No, she didn't help me wage a war on crime or take down Bane. But damn, she was a superhero in her own way like so many other single moms are. I literally wouldn't be doing what I do without her, because she recognized my love of comics early on and encouraged my geeky habit — because in her eyes, how bad can anything that nurtures a love of reading be?

It could certainly be my current emotional state, but I don't know if I'll ever read a more heartfelt line of dialogue in a comic than, "I sought merely to see your smile again." To me, it's a distillation of the hopes and dreams of a parent into its purest form. Because to a mother or father, is there anything better than seeing your child smiling, happy?

Then I noticed something as I read the last page of the issue. The tears had stopped. and I was even smiling a bit.

I found a letter I never knew existed a few days ago while going through the necessary but excruciating process of sorting out my mother's belongings. It was a letter she apparently wrote to me two decades ago, before a surgery she was due to have. Clearly, she was worried enough about that operation that she wanted to leave some final words behind just in case. Near the end of her note, she wrote, "I do not feel cheated at life, even though so many dreams I did not follow. Because I know if I had, I could have achieved them. But I didn't, because in the end, all I ever wanted was to be your mother."

The tears flowed again. Only this time, it felt less… sad. Because I was lucky enough to have a mother who, like Alfred, put her ideal above her need. What else could you ask of a parent?

Truthfully, I'm not sure what my opinion of this Batman tale would have been if my personal upheaval hadn't coincided with Bruce Wayne's fictional tragedy. Doesn't really matter, anyway. All I know is that Tom King, Mikel Janin and Jordie Bellaire put together a story that helped me start to figure out how to grasp the loss my family is enduring. To get on with the whole 'living life' thing. I'll always be grateful for that.

I'm reminded of that old saying that Jack Kirby may or may not have said. "Comics will break your heart, kid." That is certainly true.

But sometimes, comics can help you put the pieces back together.

I'm always interested in hearing what people think of the column. Find me on Twitter/Instagram/Facebook and let me know. Tell me what you're reading these days, too.

Behind the Panel is a video and audio series, as well. Our video series is chock-full of my in-depth interviews with amazing comic book creators. The Behind the Panel podcast is an audio documentary series that provides unique insight into your favorite creators and stories. Check 'em out, we think you'll enjoy them.

It's a fan thing
Join SYFY Insider to get access to exclusive videos and interviews, breaking news, sweepstakes, and more!
Sign Up for Free
All Posts About
Comics
Features
Batman
Behind the Panel
opinion
Related Stories