Welcome back to Important Toy News, the SYFY WIRE column that shows you a week's worth of amazing new playthings, collectibles, and shelf candy and gives you soothing words of why impulse buying is a very good idea. Join me, your resident toy journalist, as we start our pop culture toy-hunting journey exactly where we began last week with that funny little thing called Nostalgia!

Because really, you've got to check out what's happening at a good time for a great taste-place that brings together food, folks, and fun. Damn right I'm talking about McDonald's!

Starting today, November 7 and ending on the 11th, McDonald's is celebrating the 40th anniversary of the Happy Meal by taking us back to the past and giving 30-somethings the chance to eat too much fast food again. Let childhood reign supreme!

The four-day vintage Happy Meal experience is being advertised as a Surprise Happy Meal, meaning you can't be sure which toy you're going to get. I'm all about the McNuggets and the transforming Hamburger robot (although I have the whole vintage set because I'm a robot collecting Mac Tonight-obsessed weirdo).

Another ride on the Nostalgia Train! And today, we're going to give a "choo-choo" to the beloved video game franchise Ratchet and Clank from Insomniac Games. Adding to its collection of merchandise for this beloved franchise, Insomniac is now offering blind bags that feature a large variety of characters. The catch? They're hella expensive, each one coming in with an MSRP of $16. If you want the entire collection, which is 72 figures (three boxes of 24), it will set you back $1,900. You can order the blind bags today right here and they will ship December 2019. 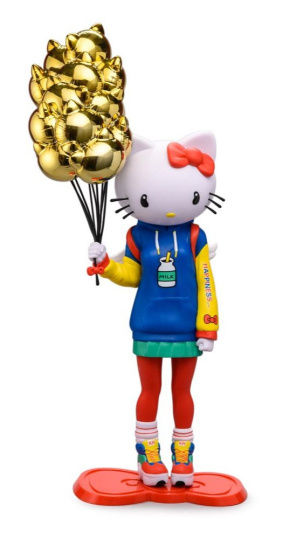 Let's move on to a brand new toy segment I'm calling "No sir, I don't like it". And for today's first toy feature in this category, we're checking out a collaboration between Hello Kitty and Kidrobot. Now, please, feel free to love this piece all you like. Your collecting is none of my business and half the time I write before I think, but for me, this vinyl figure is so much no.

First off, this Uncanny Valley monster is twenty inches tall. She has the humanoid body of a 15-year-old, she looks depressed, and she has Pennywise the Clown's hands. And trust me, I love Pennywise! I have a bunch of them and still don't want Hello Kitty with clown hands. But if you do, you can purchase her directly from Kidrobot.com.

But speaking of Pennywise the Clown, want to see something kind of cute and sexy? (Man, this toy column just keeps getting weirder!) It's the newest addition to Japanese toy maker Kotobukiya's Bishoujo line, which are characters from pop culture reimagined as cute and sexy girls (as the word bishoujo is Japanese for 'pretty girl.' Old-taku 101 over here!)

We discussed Beetlejuice a few weeks back, and we're moving on to Pennywise. But fear not you can get many a sexy slasher if you please, from Freddy Krueger to Michael Myers to Pinhead herself! You can check out the entire available collection right here.

Speaking of Japan, someone out there in the New Japan Pro Wresting universe learned that if you license your IP, your license will make you money. And what better place to do it that with toys? New from both Storm Collectibles and Super7 are figures based on New Japan Pro Wrestling, and both were conveniently revealed this week.

The first wave of characters from Super7 will be Kazuchika "The Rainmaker" Okada, Tomohiro "The Stone Pitbull" Ishii, Hiroshi "Ace of the Universe" Tanahashi, Will "The Aerial Assassin" Ospreay. A collection of accessories is included with these figures as well.

We're nearing the end, my toy collecting friends, but we can't wrap up an issue of Important Toy News without checking out some tasty new Superhero Toys! And what an array we have this week, because Hasbro and Marvel are pulling out all the stops with an X-Men: Age of Apocalypse (totally a fan favorite) Marvel Legends wave. Each 6-inch figure has an MSRP of about $20.

While ToyBiz produced some AoA figures back in the '90s, this is the first time we are seeing them in Marvel Legends form. The wave includes Jean Grey, Dark Beast, Wild Child, and Sunfire. No retail release date has been announced quite yet, but keep your eyes out, because they will be available in retail stores everywhere!