Growing up on the outskirts of Kingston, Jamaica, Jerome Walford wasn’t exposed to most American pop culture until he moved here with his family as a child in the '80s. But, boy, did he make up for it.

An avid reader, Walford fell in love with comics early but chose a presumably more stable art career and became a successful graphic artist in New York. The superhero bug had bit, however, and the success of his first comic, Nowhere Man, led Walford to take the leap into self-publishing and Forward Comix was born. Fast-forward to 2016 and Gwan, Forward Comix's first anthology and Walford’s ode to his immigrant roots, won several awards, including a GLYPH Award and an Independent Book Awards Gold Medal Award. In fact, Forward Comix has won awards every year since its inception in 2008.

SYFY WIRE caught up with Walford to find out how the artist and writer maintains quality work and a publishing company all in his own. 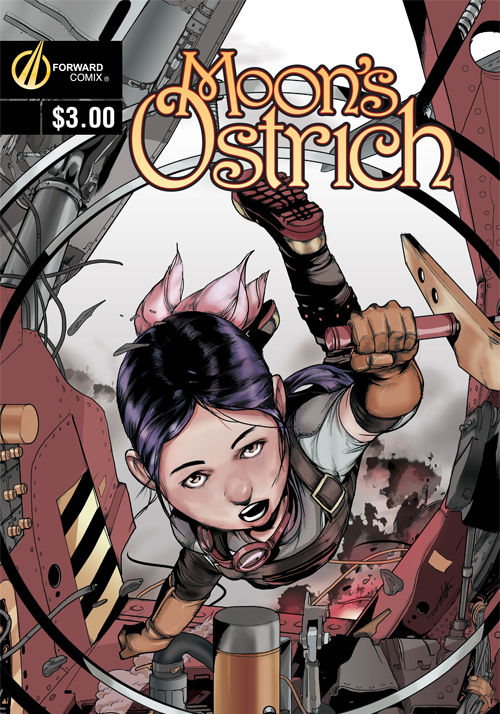 Growing up, who were the artists and writers that influenced you?

I loved drawing as a kid. I started taking drawing and painting lessons in high school. I naturally gravitated to artists like Jim Lee and Todd McFarlane. I realized expressive figure drawing can be found in all kinds of art. The lines between fine art, pop art, and other forms of visual art are quite blurred — maturing as an artist meant being able to slide easily between these expressions of art and appreciating their connections.

I liked many of the classic period novels, from The Odyssey, Othello to The Great Gatsby and Things Fall Apart. Honestly, it’s only been recently that I have found new depths in written storytelling in the comics genre, but there are many of great literary works in this format, including Watchmen and The Killing Joke by Alan Moore, and I would put David Walker's run on DC’s Cyborg right up there.

What made you decide to start an indie comic publishing company?

I started my journey as a professional comics writer/illustrator fairly late in the game. I started pursuing comics around 2008.

The feedback I was getting at the time was that my story Nowhere Man sounded interesting and the art was pretty good but I still needed to prove myself. [So I chose] to self-publish. This way, I could develop some kind of track record in comics that would make me more appealing to a traditional publisher.

After experimenting with a few formats, including a webcomic and e-publishing, it became apparent that I needed to do it "for real." Forward Comix was launched with this idea that an "unproven" comic creator doesn’t need a stamp of approval just to start. All the other forms of validation will hopefully follow if the work is excellent. This is the advice I pass on to up-and-coming creators: Put in the work, make it excellent, and finish something.

Do you find it challenging both drawing and writing your projects?

One of my college professors told me, “You are an artist, but I think you’re more of a storyteller," and I embraced that. Comics just seemed like a natural fit.

I like doing both the writing and the art, at least for now. It is very challenging to do! I’m hoping to work on a team project soon, in a defined role as the writer or illustrator. I think it does bring another aspect to the work, in addition to reducing the burden and the turnaround time for producing a finished work. 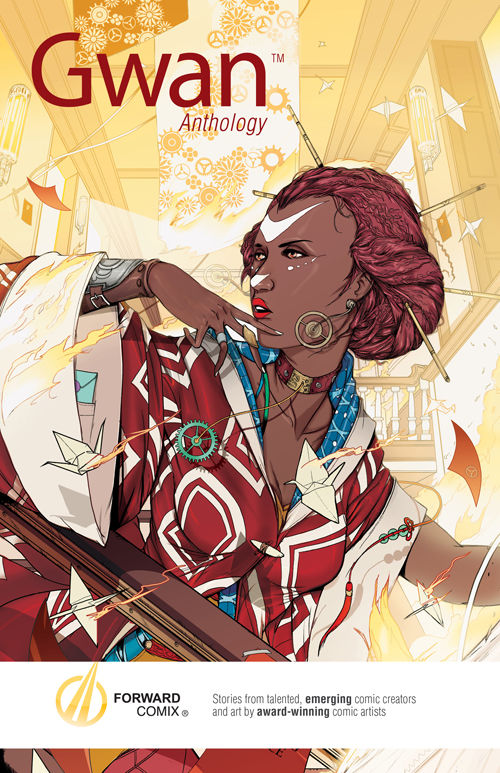 Your award-winning Gwan anthology featured many artists from all over the world. What was the process of putting that together?

I actually crave the opportunity to work with other writers and artists. After all, no one is an island. I wanted to do a story that reflected something deeply personal, yet relatable, then connect with other comic creators along a common theme. After completing my own story, I had to be willing to step into the role of senior editor, where I believe my priorities needed to be encouraging established artists to share inspiring entries and helping younger comic creators to put forward their best effort.

If they were willing to put in the work, myself and my team would support them. It was daunting, exhausting, but overwhelmingly rewarding.

Do you have plans to do another anthology soon?

Gwan Anthology became this lightning rod for Forward Comix because it showcased that we could handle a massive submissions process and curate entries down to an expressive, unique collection.

Huge thanks to Maya Rock, an established book editor, and Rebekah Griffin Green, freelance editor, who have both been heavily involved in much of my work, especially on that really timely collection. Gwan received accolades and nominations across the board, from small press publishing giants such as the Independent Book Publishers Awards (a gold medal), Society of Illustrators, advertising institutions like Communication Arts for its editorial art, and it was nominated for two Glyph Comics Awards.

I think it has made us eager do it again. You might be the first to scoop this, but we are launching an open call for submission for Gwan Anthology Vol. 2, starting around April [2019]. If someone is looking for a venue to share a unique immigrant-focused short story, or perhaps looking for an opportunity to publish as a comic creator for the first time, they will have an opportunity soon through Forward Comix.

Will you continue to grow your company into a full a roster of other artists?

I can see that Forward Comix is starting to grow beyond what I can do as a one-man operation. We have actually commissioned talent from the Gwan roster to work on small projects. I would love to see that happen more. Certain aspects need to fall into place before we can work with other artists and writers consistently. I’m very open to that happening sooner rather than later.

Why do you prefer creating indie projects rather than working on something for the Big Two?

There are lots of really interesting things happening right now in comics, media, and entertainment in general — most of it is based on narratives built over the last 50 to 70 years.

There is a lot of pop culture consolidation and harvesting happening at the moment, but if we don't cultivate new ideas and original stories now (particularly new content from a diverse perspective), then we may soon suffer a bland recycling of the same stuff. I think we all know what that looks like. I’m excited by the idea of building/planting new ideas — indie projects might be the best or most direct place to do that.

Nowhere Man is your flagship comic. Tell us about what this series is about.

Nowhere Man is a historical narrative/cop drama/sci-fi thriller which follows Jack Maguire, an ambitious NYPD detective determined to fulfill the ideals left by his father, a hero first-responder cop, who died on 9/11.

At some point, his life gets interrupted by agents from the future eager to destroy traces of future tech that has fallen into the wrong hands. With limited access to this future technology and an unstable bound consciousness with Zade, one of the future agents, Jack must work to subvert, seek out, and destroy those who would weaponize technological powers we weren’t meant to have.

At the cost of forfeiting this father’s legacy, Jack increasingly works outside the law to pursue arms traffickers and is even forced to turn against his own. With increasingly greater powers, Jack must risk everything to rise as possibly the first superhero of our time.

What’s next for Jack Maguire and Zade?

We just officially released "Nowhere Man" Vol. 3, Book 1! It was a monumental task because it’s almost twice as long as the initial trades. There is a little less about Zade, we focused on Jack’s telepathic connection to Caris, a powerful being, which has driven much of the sub-narrative. Readers get to see just how longstanding their connection has been to the storyline. Readers also get to see what’s the source of Rose Yancey's (Jack's police department partner and love interest) angst and will also be treated to a big plot twist — which moves Rose closer to the nerve center of the saga.

We will also be releasing volume editions of Nowhere Man volumes one and two! This was a large underground project last year. So many folks have wanted to have the early trades collected. I worked a great deal on that effort last year — mostly in secret.

I wanted to be sure it would happen. I have held the actual proofs in my overworked hands, and I can now say with certainty collected volumes one and two will be available by February 2019, if not sooner.

Much of 2019 will be devoted to world-building for a new project. More won't be announced till later in the year. Yet, after creating over 50 pages of developmental material, engineering, and historical construction, it might be time to just work on the actual title.

You can't always wait for a perfect moment. Sometimes you just have to go for it.

It's a fan thing
Join SYFY Insider to get access to exclusive videos and interviews, breaking news, sweepstakes, and more!
Sign Up for Free
All Posts About
Comics
Features
Indie Comics Spotlight
Interviews
Related Stories