Indie Comics Spotlight: Why The Black Mage is not a black Harry Potter, but it could be

Right out of high school, Daniel Barnes joined the Navy on the G.I. Bill to help pay for college. Enlisting for five years, he was often stationed out in the middle of nowhere on a ship with no Wi-Fi, no phone, and limited internet access for months at a time. Barnes could regularly be found passing the time by writing in his bunk, or watching one of the thousands of television episodes that he had stored on a drive. It was during one of those deployments that he came up with the story for The Black Mage.

Published by Oni Press and due out next month, The Black Mage graphic novel has been called the “Black Harry Potter.” That would be an accurate description ... if the protagonist were Dean Thomas, the Sorting Hat put him in a Final Fantasy-esque house, and Hogwarts was a magical Deadly Class in which the students tried to kill you and the faculty were all Klan members.

Drawn by newcomer D.J. Kirkland, The Black Mage had initially been an entry in the Oni Press call for submissions back in 2015. The story follows new student Tom Token, the first recipient of the "Magical Minority Initiative," which is meant to integrate St. Ivory Academy, the first school in the South to do so. He’s smart, he’s powerful, but he also finds himself in danger as he keeps receiving mysterious texts that uncover a sacred ritual and a conspiracy that threaten the very foundation of the school.

But Tom is from a long line of powerful Black Mages, and with a little help from his classmate Lindsey and the ghosts of Harriet Tubman, Frederick Douglass, and John Henry, they must take down the school's headmaster, who also happens to be the Grand Master of the KKK.

This YA book has major manga and anime references throughout, as well as fun comedic dialogue that offsets the often heavy themes of slavery and institutionalized racism. SYFY WIRE spoke with Barnes and Kirkland about collaboration, their favorite anime, and how the book is a master class on how to turn stereotypes into epic plot devices.

What inspired this story?

How did the two of you end up collaborating? Did you know each other before?

DB: I did not know D.J. before. I commissioned another artist to do sample pages for the pitch, and when the project got picked up, [Oni said,] “We know the perfect person to do this.” And they approached D.J. at a convention, I think.

D.J. Kirkland: Yes. I was approached for the book in 2015 at Pax West. My editor asked me if I still had an interest in doing comics. I said, “Of course I do!” I was working a 9 to 5, putting my portfolio and everything out there to get into comics. When he gave me the pitch for Black Mage, I was like, “Where do I sign? Can I start working on this right now?”

Finally, my chance to break into comics ... Plus, being able to bring my manga/anime influences to the work, which was just phenomenal. 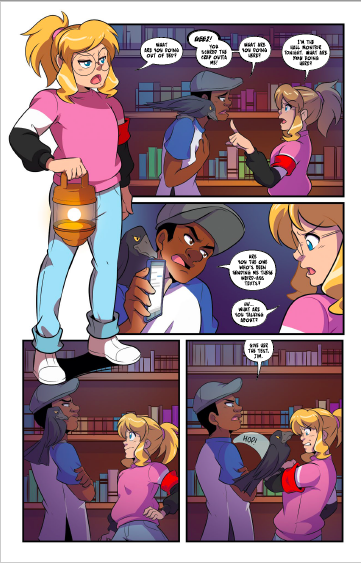 It’s unbelievable that this is the first published comic for both of you.

DB: I did a webcomic when I was in the Navy, also based on Super Mario Bros. And it was on Kotaku, and it got some attention. But as far as being an actual professionally published [comic], this is my first project.

DJK: I do have work in Dream Daddy [by Oni Press], out now. But yes, this is my first professional full book. I've been drawing my entire life. So to get to this moment, it feels amazing to finally be acknowledged by a huge company like Oni that I've wanted to work for for a very long time. Like they'd done portfolio reviews with me when I was in college. So to grow this relationship from undergrad and to my first full book is amazing.

What did you think when Daniel first sent the script?

DJK: I was like, “Wow! This is really going there." I had never seen a comic out there like this. Sure, there are comics about slavery or race, but not combining that high energy like shonen manga and the sparkle and the fun of anime but with black people at the center. Like I’m literally drawing Frederick Douglass and Harriet Tubman as manga characters. 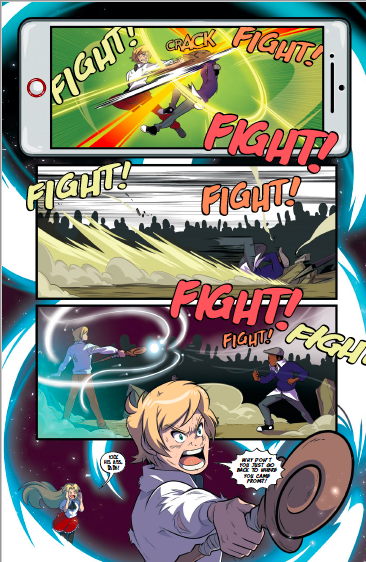 Your main character’s name is Tom Token, and his familiar is a Crow named Jim. Besides the obvious, why those choices?

DB: We are reappropriating these bad Black literature stereotypes and putting them into a good character that stands on his own.

He's clearly the token character, but he's the main character. He's guiding the story; the story isn't guiding him. The story is very blunt and very direct. [Unlike Harry Potter,] it’s not a metaphor, it’s not really open to interpretation. It's the Klan, and they're evil, they're doing magic and Tom is there to stop them. It’s also kind of meta that Tom Token is entering this white school, but he's also entering this very white space of a young adult fantasy at the same time.

Can you name some of the other manga and anime references that were going through your head when you were creating this?

DJK: Sailor Moon, for sure. Like that was the series that got me to become an artist. Dragon Ball. I grew up in the arcade playing Street Fighter, Tekken, and all that stuff. Anything from the '90s and early '00s anime, it's all in the book. 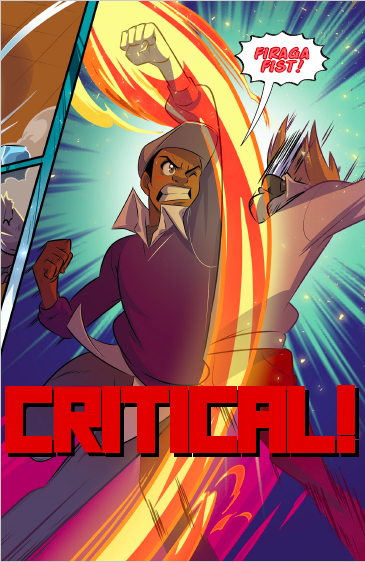 DB: G Gundam, of course. Dragon Ball Z, and newer stuff like My Hero Academia and Black Clover, anything that was like a shonen action kind of manga. I owe a lot to Final Fantasy, hence the title. There's some Pokémon in there, and I don't know if anyone caught it, but there's a Chrono Trigger reference in there, too.

Who were some of the writing influences?

DB: Jeff Smith is one of my huge influences. He created Bone, one of my favorite graphic novels of all time. Oddly enough, the Sonic the Hedgehog and Archie comics, specifically the ones written by Ian Flynn. He's been a major influence on me because he had this forum called BumbleKing where he would post scripts that he would write for Sonic issues. People can look at them and download them. And so that's how I learned how to write comics.

What excites you the most about Black Mage?

DB: This is the book I would have wanted to have read when I was a 13-year-old nerdy Black kid at a predominantly white school. It's everything. I think a middle-school Black teen would like it. It's Final Fantasy, JRPGs, anime, and it's manga with a sprinkle of Harry Potter.

DJK: The biggest thing for me was drawing a Black kid at the center. Someone is going to walk into a bookstore and see a character that looks like them on the cover. When they open it up, this character is shooting energy beams as they see in Full Metal Alchemist or My Hero Academia. So being able to do that is a dream come true for me.

The Boys: Full trailer for Season 3

The Predator returns in first teaser for Hulu's 'Prey'

‘For All Mankind’ full trailer for Season 3 goes to Mars

David Tennant and Catherine Tate return to 'Doctor Who'