Indie Comics Spotlight: The key to G. Willow Wilson's success? She can write in her sleep.

For March, in honor of Women's HIstory Month, Indie Comics Spotlight is dedicated to women creators in indie comics.

G. Willow Wilson has won quite a few awards during her writing career, including a World Fantasy Award in 2013 for Alif the Unseen; a Broken Frontier Award (2014); a Hugo Award (2015); and a Dwayne McDuffie Award for Diversity (2016) for her groundbreaking work on Ms. Marvel, featuring Kamala Khan. Since then, she's moved on from the Jersey City hero (and from Marvel, in fact) and now pens the Wonder Woman The Just War arc for DC.

Wilson really owes her comic book career to Karen Berger, the legendary editor and founder of DC's Vertigo imprint who took a chance on the young writer in 2007 and hired Wilson to write her first comic, Cairo. Things have come full circle for Wilson, as her next title, Invisible Kingdom, drawn by Christian Ward (Black Bolt, ODY-C), will be one of the first graphic novels released by Berger's Dark Horse imprint, Berger Books, in 2019.

Invisible Kingdom is a space odyssey that centers around two women: a tough fighter pilot who has seen too much and a young religious acolyte who separately uncover a conspiracy between the the system's dominant religion and the mega-corporation that controls society.

We spoke to Wilson about what inspires her and how she has the ability to write in her sleep. 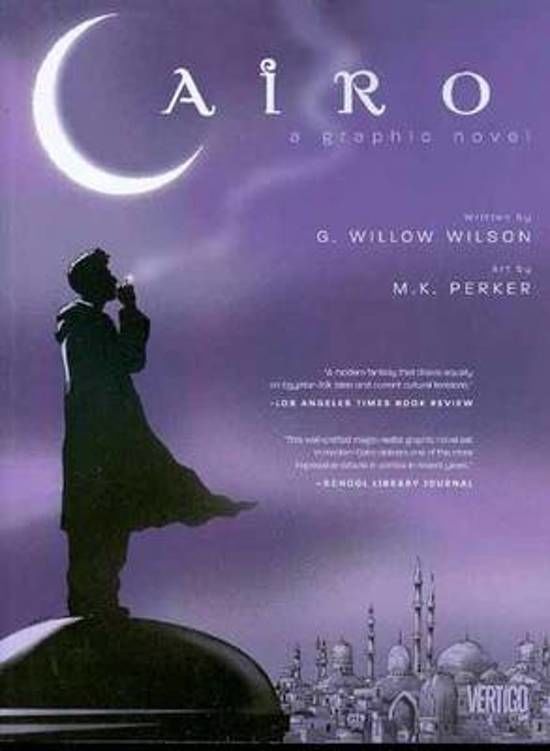 Where were you born and raised?

I was born in Monmouth County, New Jersey, and lived there until I was 12. Then we moved to Boulder, Colorado, where I went to high school.

What were you a fan of growing up?

I was passionately into the '90s X-Men cartoon show — it was what got me into comics. And I remember having a horrendous crush on Optimus Prime. My family was also a big Star Trek family ... we watched the entirety of The Next Generation as it aired. It was the one day a week we were allowed to have popcorn for dinner, haha.

You were already an accomplished author. What made you take the leap and work with DC Comics back in 2008?

I don't know that I was all that accomplished — I'd gotten lucky and had a couple of high-profile pieces published in various places, but I was still quite young — only 25. Really it was Karen Berger who took a chance on me and on the script of what eventually became Cairo, the graphic novel I created with Turkish artist M.K. Perker. It was wonderful to have that kind of mentorship from such a renowned editor, and it had a profound impact on me.

What are you reading right now?

I'm finishing The Western Wind, a medieval mystery by Samantha Harvey, and I'm about to start They Were Her Property, an academic analysis of the role white women played in American slavery. And then there's the massive stack of superhero comics next to my bed. It never gets smaller; I just swap issues out every month.

Where do you find most of your inspiration?

It often takes me by surprise. I'll be in the middle of what I think is a very ordinary conversation and a word or a phrase or a joke will suddenly become the seed of a story. I can never predict where the next one will come from.

On Twitter, you mentioned that you had written an entire chapter recently in your sleep! Does inspiration strike you at random like that often?

Yes! And more than that, I'm so used to being on bone-rattling deadlines now that I think a lot of my process is automatic. I'm nearly always writing. That is not necessarily a good thing, by the way — the less you rest, the slower you get, and the more clunky the stories become. But this is the nature of the beast — those books have to come out month after month whether you're in the mood or not.

In Invisible Kingdom, you and artist Christian Ward got a chance to build the universe from scratch. Was it fun or daunting?

A bit of both! But having Christian as a co-creator makes everything so much more fun — he has such a wide-ranging imagination that he nearly always improves on whatever I've come up with. Like, 'Okay, we've got this funky space monastery, but what if it floats around and moves?!' It's great. I just incorporate the things he comes up with into the script and roll with it.

You write wonderful multilayered characters. What can we expect from the two women featured in this story?

They are very different but drawn together by the enormity of the conspiracy they independently discover. Grix, the freighter pilot, is a realist and a bit of a cynic. Vess is pious, poetic, sensitive, but she's also got tremendous courage — she leaves her homeworld to go on a sort of spiritual quest, and she does it alone. So they are well matched in many ways, even though they've had very different life experiences.

The characters you write like Kamala and Fatima are so relatable, even when they’re in crazy situations. Do you pattern dialogue off of people that you know?

I think I probably do, though it's not conscious. I try to sit with a character until I can hear them clearly in my mind, and only then do I start writing dialogue. The toughest thus far has been Wonder Woman. What is realism where an immortal Amazon is concerned? I still don't quite know.

Invisible Kingdom is a space odyssey but has a very spiritual storyline. Was that intentional, or did the writing just take you there?

I find religion fascinating to write about — how do we know what we believe? What happens when those beliefs are tested? How much of what we think we know is just habit? I like big questions. And massive sci-fi action sequences. So I just kind of blended them up into an epic space cult drama.

What's the most fun part of the writing process for you? The most frustrating?

I like being in the thick of things. When I'm in the flow and it's all coming very easily — that's the best. It's getting into the flow that can be frustrating. It's tempting to just hit refresh on Twitter.

What is one word that you would use to describe this new series?