This month, Indie Comics Spotlight is dedicated to African and African-American creators and publishers in the indie comic book industry in honor of Black History Month.

Odunze Whyte Oguguo grew up in a little town in Lagos, Nigeria, in a home with two televisions, a luxury, except for the fact that the town had spotty electricity, no internet, and he had to share his favorite shows and video games with seven other kids in the house. But comics were available, and when he wasn’t playing soccer he read everything he could get his hands on. Eventually, anime made its way to Nigeria and he was hooked — not just with the animation style, but with the manga from which most of the shows originated.

Fast-forward to 2019 and Oguguo is the co-founder of Saturday AM, one of only two successful, independent Black-owned manga companies here in the U.S. (The other is Noir Caesar, although Saturday AM was founded first and without superstar backing.) In addition, Oguguo has a popular YouTube channel through which he gives tutorials and offers tips and tricks on how to create manga.

SYFY WIRE sat down with Whyt Manga to find out what attracted him to the medium, why he teaches for free, and why music is one of his first loves. 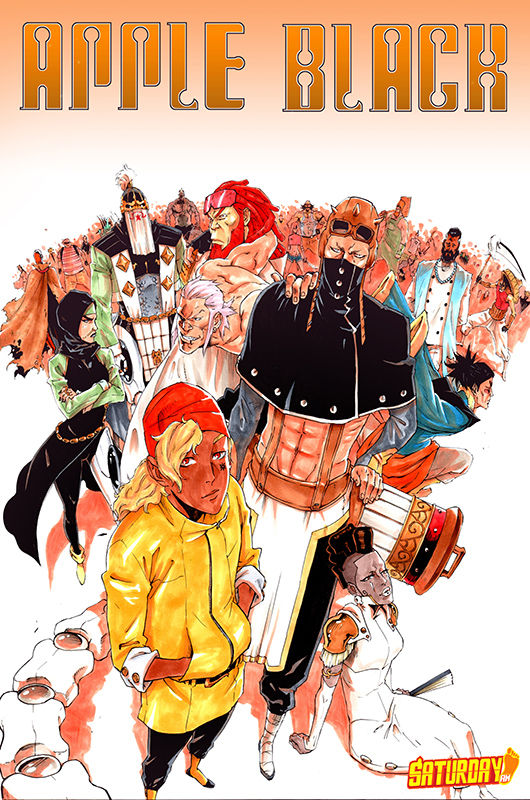 Was Japanese manga big in Nigeria when you were growing up?

At first, we really mainly had access to the anime adaptations of the big series like Dragon Ball, Pokemon, Digimon, Rurouni Kenshin (which we called Samurai X), Voltron, and more. After internet access became a little more widespread, we got access to more Japanese content, especially manga.

The internet allowed us to learn about other series, and from then on, manga became more popular than ever. I saw a lot of grown men at internet cafes talking about anime even I had never heard of. Some had hard drives full of hundreds of episodes of different series.

What was your favorite manga?

Tite Kubo’s Bleach really was the series that got me interested in the medium overall, so I’ll go with that.

And who was your favorite artist?

I’m not sure I have a favorite artist, but I think Yusuke Murata is brilliant! Murata’s illustrations for One Punch Man and Eye Shield 21 are stunning.

That said, there have been many other series and creators that have influenced my work over the years, filmmakers as well. Like David Fincher’s Fight Club (that’s a gem), M. Night Shyamalan’s The Sixth Sense, and Christopher Nolan’s Memento, for example.

When did you decide to become a mangaka?

I decided when I saw the potential the internet afforded artists to build a strong audience and a living doing what they love. The decision also came after I felt like I had stories I love that just had to be told (my comics Apple Black, Bacassi, and more). I’ve always loved to draw, but I got bored easily. So I drew stuff to entertain myself. If the lights went out while playing Street Fighter 2 on the Super Nintendo, I’d pick up a pen and draw Ryu and Ken to finish the battle [in my head], and over time I got good at drawing.

Naturally, the idea of becoming a comic artist popped into my head but felt unrealistic, especially at the time, because of the lack of comic job opportunities in the country and concerns from parents. Nigerian parents, you know? If you’re not a lawyer, doctor, or some kind of engineer, who are you really? So I went to the University of Texas at Arlington, majoring in computer science engineering and minored in fine arts because I still loved art so much.

Eventually, as the internet grew and I saw the potential of building an audience for my content and making a living doing what I love, I switched. Fine arts became the major and computer science became my minor. I did not have the same passion for engineering, even though I still graduated with a minor in it. I just needed to learn how to work this new digital and social media world.

I’m still figuring it out. Overall, getting my stories out there to entertain and teach meant more to me now than the mangaka title or even the medium, even though it’s extremely cool. 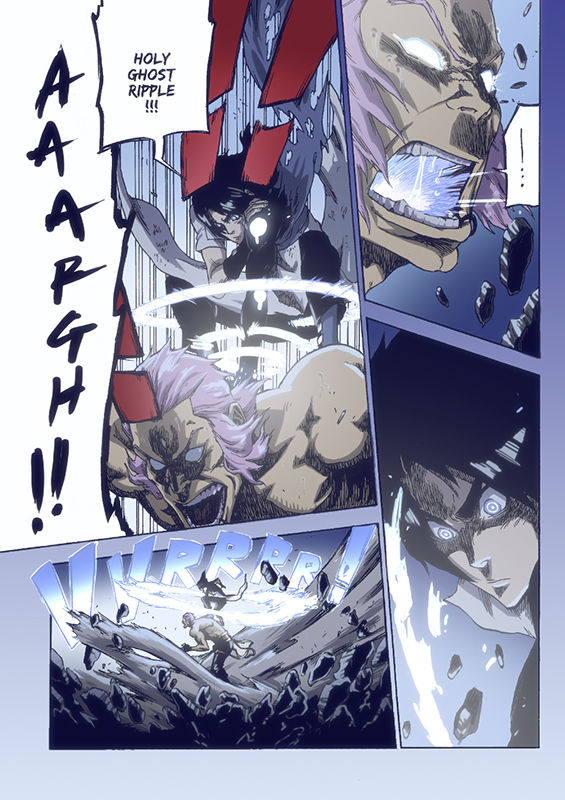 What led you to partner with the Saturday AM team?

After hustling for a few years in the Wild West of digital comics, social media, and content creation online, I connected with many artists and supporters online. Raymond Brown, co-founder of Saturday AM, reached out to me before the company launched officially about [not just joining the roster] but also to further the mission of making manga more global and diverse. After a few chats with the founder Frederick L. Jones, we joined forces and I became one of the co-founders of the company.

I and many others have also liked the idea of a Shonen JUMP-style magazine here in the West. Many have tried to no avail, so it’s amazing to be a part of the Saturday AM team going strong with over a 100 solid issues of content released.

The magazine features my shonen adventure fantasy series Apple Black, The Massively Multiplayer World of Ghosts, featuring the first Indian main lead character in a shonen-style manga, and Clock Striker, the first black female main lead in shonen-style manga about engineering, and much more. Interesting stories are our primary goal, and we continue to work hard towards our mission and have even launched Saturday PM, where our more mature titles are published, like my new series Bacassi, which has a few Nigerian influences of mine.

How often does your manga drop?

Apple Black updates monthly, just like Saturday AM’s issue release schedule. Saturday AM is the name of our monthly digital magazine, and Apple Black will have installments inside of the magazine.

After enough installments, Apple Black comes out with a volume graphic novel with 180 to 250 pages. I had a real blast creating the two paperback volumes of Apple Black released in 2014 and 2017, respectively, with the third volume set for late 2019 release. I learned a lot from the experience, as well.

What has been the response to your work in Japan?

When I come across responses online from Japanese viewers to either my sequential art or video content on YouTube, it has always been very extremely pleasant. Some are very surprised to find out that I’m Nigerian, but that shock is not exclusive to people in Japan. 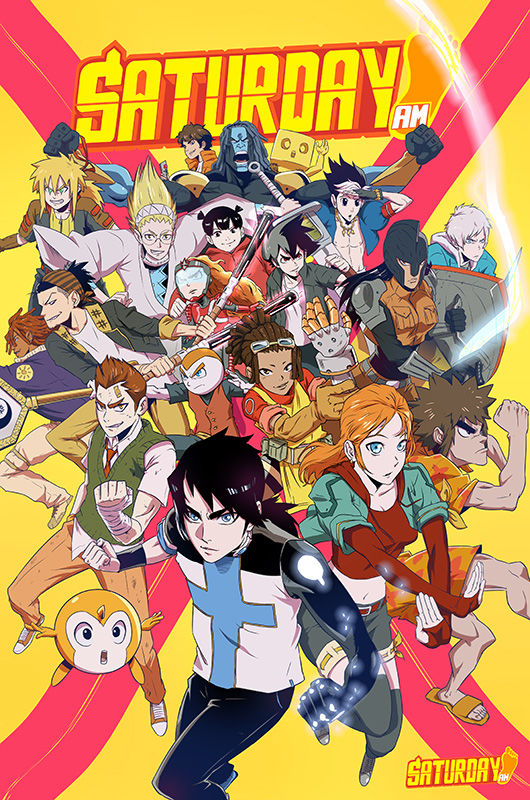 Your detailed YouTube tutorials are extremely popular. What led you to create them?

I remember not knowing anything about making a manga or sequential arts when I began. I used the internet and sites like YouTube to learn what I know. There were struggles sometimes to get some online resources to help further my knowledge without extensive research. I make my YouTube tutorial content free online to make it easier for others like me to learn. There is a joy in teaching, and usually people are so appreciative of my efforts they become supporters of my actual work and content, so the free content also helped me build an audience for myself because the free content attracted audiences that would be interested in my comics.

What other projects are you working on that you can share?

Currently at Saturday AM we are launching a volume graphic novel line called Perfect Tanks and we’re releasing remastered versions of the Apple Black volumes.

[On the personal side] I am also working on some animation for music videos for my own songs. My songs have slowly built audiences of their own. I love animation and want to learn more and gain experience doing it, so I’m using my music for animated music videos. I make music under the name Over9000. The name still ties into my anime roots, for hopefully obvious reasons.

It's a fan thing
Join SYFY Insider to get access to exclusive videos and interviews, breaking news, sweepstakes, and more!
Sign Up for Free
All Posts About
Comics
Features
Indie Comics Spotlight
Interviews
Related Stories