2001 and The Eternals: Revisiting Jack Kirby's last hurrah at Marvel

A few years ago, I pitched a book to commemorate the 50th anniversary of Stanley Kubrick's 2001: A Space Odyssey. It was to feature essays, interviews, and reproductions of memorabilia linked to the film. One idea I had was to recreate, in a somewhat similar style as you see in IDW's Artist's Editions, a 10-page sequence from Jack Kirby's 2001: A Space Odyssey Treasury Special adaptation that Marvel published in 1976. It contains some of the most spectacular art of Kirby's career and is indeed maybe his final epic art deliverance. The book idea had interest but it eventually didn't sell, in part because the publisher was not confident it could get the rights to reprint the art from the comic.

Although I never got to do that 2001 book, I still have that Treasury comic, because they're amazing, don'tcha know? Funny thing is, that 2001 book, and the monthly series that soon followed, weren't the only trippy works the King blessed us with when he returned to Marvel during that glorious bicentennial year of 1976. He also found the time and imagination to invent his own new race of godlike beings with The Eternals and he managed a return to Captain America with the "Madbomb" serial.

He would later work on other books such as Black Panther, Devil Dinosaur, and the 2001 spinoff Machine Man, but to me, Kirby's second term at the House of Ideas was defined by the far-out magic he conjured in 1976. To be clear, neither The Eternals, 2001, or even his Captain America runs were "home runs." They were more like doubles wherein the runner was thrown out in dramatic fashion while trying to stretch it into a triple. Because even Kirby's misses were impossible to not stare at, in awe. That's what made him, well... Kirby.

Take the Eternals. Kirby's series lasted just 19 issues (and an annual) but the characters have remained viable enough that they are about to be introduced into the MCU in February with a film starring Angelina Jolie, Richard Madden, Kumail Nanjiani, Salma Hayek, Gemma Chan, and a host of others. When Kirby returned to Marvel, it was after exiting DC following the disappointment of the early demise of his Fourth World epic, as well as various inter-office politics that he fell victim to.

The Eternals, as originally defined by Kirby, were created by the alien Celestials a million years ago and left on Earth to watch over and protect humanity. Exploring deities within a prism of science fiction and mythology was something that fascinated Kirby. One could draw lines connecting the themes of The Eternals not just to Kirby's New Gods but also to his Tales of Asgard stories for Marvel in the late 1960s. The Eternals series was wild, frantically written, and brilliantly drawn with Kirby Krackle and bizarre monsters all over the place. It was also borderline incomprehensible to me when I read it as a young pup.

Much like the New Gods and the Forever People titles, Kirby's abundance of ideas proved to be too hard for him to harness into 20-page comics. Each issue was overflowing with grandiose schemes and themes that weren't always done justice by Kirby's scripts. But just because I couldn't quite get the Kirby dialogue didn't mean I couldn't stare in wonder at the incredible imagery he put down on paper.

Many of Kirby's most abstract ideas throughout his career often proved to be years ahead of their time. It's why so many of his properties, at DC and Marvel, have been revisited and revamped so often. Kirby may not have always stuck the landing, but he created enough to give other creators, such as Neil Gaiman, Walt Simonson, and recently Jason Aaron a chance to perfect the routine.

On its face, adapting a contemplative, restrained example of science fiction like 2001: A Space Odyssey seemed to be antithetical to Kirby's bombastic creative nature. A Kirby story was raw kineticism, propulsive and as subtle as a runaway truck. Kubrick and Kirby should not blend well.

But that Treasury comic is... fascinating. It works. It just works. According to Kirby historian Mark Evanier, the comics legend wasn't exactly thrilled to be adapting Kubrick's film. But using text from Arthur C. Clarke's novel, he crafted a story that took a literal approach to telling the story that detoured from Kubrick's vague, leave-it-open-to-interpretation approach. One could argue Kirby's adaptation went against everything the filmmaker wanted to do with his movie. But a comic book isn't the same as a motion picture, and Jack Kirby knew comics as well as anyone has ever known the medium. Thank goodness, because otherwise, would we have been blessed with such breathtaking imagery as this splash page of when Dave Bowman goes through the Star Gate?

Even though Kirby didn't particularly enjoy doing the 2001 Treasury Special, he signed up for the ongoing series that followed. And despite the constraints by Marvel about creating new characters due to concern they would lose ownership to the MGM film studio, Kirby couldn't help himself. He kept creating. That's how Machine Man was created, and later moved to the Marvel universe.

It's a shame that, due to convoluted rights issues, the 2001 books Kirby created have never been collected in an omnibus or some other premium format. Because those comics — much like that original Eternals volume — capture the greatness of the King of Comics. 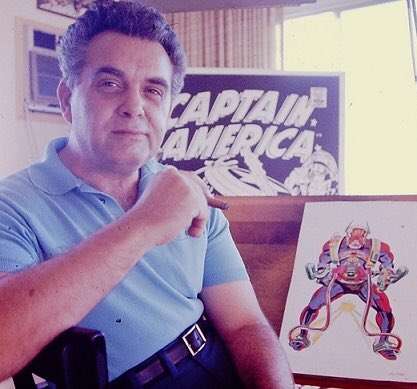 Imagine a 58-year-old man, in his fourth backbreaking decade of creating comic books, still having enough left in his creative tank to write, draw, and edit three wholly distinctive series... and doing the covers, to boot! Imagine the discipline it must have taken to do that, with all the itinerant baggage that he must have been carrying upon returning to a company he had left under acrimonious circumstances. That's what Kirby did during that magical year of 1976.

Before you watch the Eternals movie, be sure to read the original comics. Track down the trade paperbacks, or the single issues. Do it for the artwork alone. The 2001 Treasury Special and ongoing series may be a bit harder to find and cost you a few more dollars. But trust me on this: It's worth the stretch.

All hail the King!

What's your favorite Kirby project from the 1970s? Find me on Twitter/Facebook/Instagram and let me know.