Back when Star Trek: Deep Space Nine initially aired on TV back in the early to mid-'90s, I never really got too deeply invested in the show. In part that was probably because I was too young at the time to understand some of the more politically driven storylines, and in no small part because I only ever watched isolated episodes of a series that relied on long-running, overarching plots. However, from the few episodes I did watch and enjoy as a child, one character always stuck with me as deeply interesting: Jadzia Dax.

The series, a spinoff of Star Trek: The Next Generation, is set on a space station where a stable wormhole has been discovered. The wormhole allows for our crew to leap to parts of space previously inaccessible, and the station serves as a hub for diplomacy regarding species living near and through the wormhole. One of the species living close to the space station is the Trill, who play a role in a great number of plot threads throughout DS9.

The Trill are a humanoid species, distinguished from humans by two rows of spots across the sides of their bodies and faces. They're able to merge themselves with a species known as the symbiont, gaining the memories and abilities of previous host Trill, with their personality becoming a combination of the host and the symbiotic creature.

Jadzia is a Trill and host to a symbiont named Dax. While Jadzia herself had always been driven, smart, adventurous, and caring, becoming host to Dax caused her to develop a fierce sense of loyalty, a more developed sense of anger, and a greater understanding of species she hadn't interacted with herself while alive. The Dax symbiont had been hosted by seven previous Trill prior to Jadzia, a mix of men and women, and many of her episodes on DS9 focus on how she chooses to deal with the existence of the previous lives she has rattling around in her head. However, to me as a child, as well as rewatching the show now as an adult, the most interesting aspect of her character is her very recent memories of existing as Curzon, a male Trill.

While Jadzia can, to varying degrees, remember her life as each of her past host existences, the host we hear most about in the show is Curzon, and that very much makes sense. Curzon was the most recent host of the Dax symbiont, lived a long and full life, accomplished many things, and because of how long he lived is the only host who most of the characters alive on the show personally met. Curzon is a very recent memory for Jadzia as well as the rest of the station's crew, and as far as the show is concerned Curzon is the only previous host to really be frequently relevant to the plot.

I mention all this because while rewatching the show in its entirety, I have increasingly been viewing the character through the lens of being an early allegory for someone living life as a trans woman, with all the struggles and changes that come with it. While the reading of the character only really works if we focus on the past life as Curzon as primary previous existence, it does make several parts of DS9 carry additional fascinating weight.

Jadzia Dax is a character who's carrying on the life of Curzon Dax, a man who was known far and wide and lived his whole life as male. For many characters we encounter throughout the series, the connection between who Jadzia Dax is and who she was is hard to shake. The station's captain, Sisko, spends the vast majority of the show's run misgendering Jadzia, referring to her as "old man" frequently, a reference to who she once was rather than who she is now. It's not until the show's final season, when a new host takes over the Dax symbiont, that he is finally called out over this and corrected on the fact that "old man" isn't really appropriate as a term.

However, Jadzia's plot threads throughout Deep Space Nine are largely not about people treating her as her old identity. Most characters respect who she is now, and a few key episodes really tackle her as a trans metaphor quite positively head-on. In the Season 2 episode "Blood Oath," Jadzia comes face to face with a group of Klingons who Curzon had been close friends with. Kor, the leader of the Klingon group, initially opens with a greeting: "Curzon, my beloved old friend," while pulling Jadzia into a big deep hug. Jadzia simply says, "I'm Jadzia now," and without a second thought, Kor continues the hug and smiles, saying, "Jadzia, my beloved old friend" instead.

Kor, from this point on in the episode, always refers to Jadzia by her new name, uses female pronouns for her, and doesn't treat her any differently. She's still the friend he remembers, he doesn't feel any awkwardness, he simply listens to Jadzia's correction on her new identity and instantly takes it to heart.

This episode is one that supports the reading of Jadzia as a trans woman metaphor. It directly addresses the fact that some of her friends previously knew her as male and under a different name, but that the right way to deal with your friend coming out is simply to listen, embrace them as you otherwise would, and make the effort to correct yourself going forward. It's a beautiful template for how to embrace a friend who has come out as trans, aired on TV decades before trans characters in media were becoming a mainstream conversation.

Beyond the fact that the rest of the show is littered with references to Jadzia having to adjust to presenting as female with decades lived and socializing as male in her head, there's another episode worth noting when read as a trans metaphor: Season 4's "Rejoined." Jadzia comes face to face with Lenara Kahn, another Trill, and wife to Dax host Torias prior to Jadzia's inheritance of the Dax symbiont. 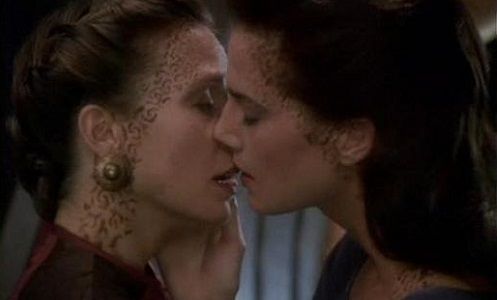 If joined Trill enter relationships, they are forbidden from returning to those same relationships once the symbiont moves to a new host. This is very much just a plot device thrown in to cause conflict in this specific episode, but it does so very effectively by creating a situation where a trans woman metaphor character is drawn toward a forbidden lesbian relationship that could lead to exile and their symbionts being refused future hosts.

Lenara and Torias had been married during his merging with the Dax symbiont in a straight-presenting relationship. After Torias, and then Curzon is replaced by Jadzia as host, the relationship becomes taboo, with society ready to shun both if the relationship continues. The episode is a real highlight of the series, with the back-and-forth of these two women navigating if they are willing to face the consequences of societal expulsion for loving each other feeling considerably forward-thinking and relevant. Jadzia's ex-wife never dismisses that she's now female, or that she still loves her; they just openly deal with the fact their relationship is different now and they have to decide if they're comfortable with how society would view them together. For an episode of TV written in the mid-'90s, it really does a great job of feeling relevant decades later.

While Jadzia Dax doesn't survive the whole series of Deep Space Nine, replaced in the final season by a new female host when actor Terry Farrell decided to leave the show, Ezri Dax (Nicole de Boer) continues the trans metaphor by being more assertive and proactive in ensuring that people respect her female identity. She's a woman, and unlike Jadzia, who feels more like an early transition metaphor in the ways she sometimes stays quiet when misgendered, Ezri feels more like someone deeper into transition, more confidently ensuring she's respected as who she is, not who she was.

Deep Space Nine certainly isn't perfect as a trans positive allegorical show, with the episode "Profit and Lace" in particular using gender transition as a punchline quite tastelessly, but overall I have been loving rewatching it. As a trans woman, getting to watch Jadzia Dax navigate the world, remembered by those around her to have been previously male but still being accepted as one of the most badass yet caring women on the ship, has been really comforting. I love Jadzia, and getting to watch her story through a trans-positive lens only serves to make me enjoy her more.