Jihae is a singer, songwriter, actress, and activist. She’s also the very first face you see in Season 2 of Altered Carbon (Netflix), but there is more to her role and her talents than meets the eye.

She and her siblings were born in Korea, but since her father was a diplomat, the family moved around quite a bit, which is why she speaks four languages: French, Swedish, Korean, and English (the latter two she speaks fluently). Singing came naturally (both her mother and grandmother wanted to be opera singers), but acting did not.

It's hard to believe that Jihae's first formal acting gig was just four years ago on National Geographic's Mars. The docudrama from executive producer Ron Howard followed a series of astronauts on a mission to colonize Mars. In the series, which was intercut with real-world 2016 scientific commentary, Jihae played dual roles: both astronaut Hana Seung and Mission Control Capsule Communicator Joon Seung, Hana's twin sister back on Earth. 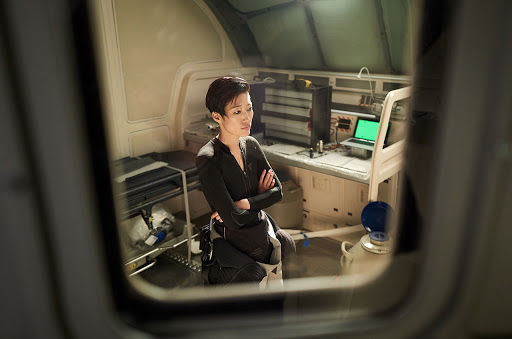 But her breakout role was as Anna Fang — the rebel environmentalist and leader of the Anti-Traction League — in the Peter Jackson-produced Mortal Engines. With a scarlet trench, ornate hand cannon, and winged eyeliner that could cut glass, Jihae's screen presence was so profound that original author Philip Reeve wrote an entire book, Night Flight, about her character, despite the movie’s box-office flop.

Despite her sci-fi success, Jihae considers herself a musician first; she debuted as a singer in 2007 and has released four full-length rock albums since then. She sings the title track of her latest album, Illusion of You (2015), in a club at the top of Altered Carbon Season 2. Not only is she (and her voice) mesmerizing, but her presence in the first episode is vital to the continuation of Takeshi Kovac's story.

SYFY WIRE spoke to Jihae about her music, her acting, and what inspires her.

**Spoilers for Altered Carbon Season 2 ahead!**

In your first acting experience on NatGeo's Mars, you had to portray two different people. How difficult was that?

Jihae: It was so difficult that I think I lost about 12-15 pounds on set. I couldn’t sleep for the first two, three weeks. Honestly, I actually give my childhood credit for my survival of the show. Because I had zero experience on set and memorizing lines and I basically took what I know in music through music performance, being in the present moment ... and took that into acting.

That sounds like it gave you outstanding experience for when Mortal Engines came calling.

What was it like playing such a badass character?

It was, it was really exhilarating and empowering. The most incredible experience I could ever ask for. Because not only am I representing a woman of color in a powerful leadership role that kicks ass, but technically in that story, [Anna] is an environmental activist of sorts. (A ruthless killer one, of course.)

There were so many layers of depth within that storyline that really spoke to me personally. Anna's history of having been a slave and finding parts and building her own Airship so she could escape by the time she became a young adult? That's an inspiring story. But the most incredible thing about this experience was that I never expected Peter Jackson and Fran Walsh and Phillipa Boyens and Christian Rivers, this incredible team, to be so collaborative. They really cared what I thought.

With Altered Carbon, were you familiar with the show before joining the cast?

So what did you think when they told you you were going to be playing Takeshi Kovacs?

It was really exciting. Alison Schapker and James Middleton, one of the executive producers, were both fans of my music, and they were really excited to have me on. I couldn't be more thrilled to be a part of something that is this well written, with a strong concept. And Season 2 I think raises another bar for that show. It's excellently produced, all the actors were wonderful, I'm so excited to be a part of it and to play the lead, and as a singer? I mean, I couldn't dream of something better.

It was not only perfect, but it's your voice singing your own song. Did you tell them you wanted to sing that song in that scene?

Yeah. They initially wanted me to do a Cole Porter song [which is in the show], and then they actually suggested maybe they would have me do one of my songs ... Illusion of You made complete sense for the series.

What comes to you first when you write your lyrics? Are you inspired by a word, a thought, or a feeling?

Anything that really emotionally moves me is a subject matter I can write about. Sometimes it's like fishing for channeling where a melody with a phrase comes to mind. That's a really lucky day, and then I build on that. And then sometimes it's just the phrase and I look for the ... melody, phrase, or a subject matter, and then build on it.

The Illusion of You is obviously about illusions, the illusion of self-identity and unleashing of group identity and how we view ourselves. My message for that album is that we think we are so separate and different and there is such a big divide between cultures and races and countries. When in fact, if we really go deep within ourselves, it's undoubtable that we are all connected. Every living being is connected. And if everyone can see that, then there wouldn't be so much hate and violence.

Can you talk a little bit about Asian representation within the space of science fiction, and how you choose roles?

I got to give it to the sci-fi community for representing, not just in the comic book world but also in production and with studios and networks. I think it has opened up to a certain extent and a degree where people appreciate Asian stories like Parasite. Which really swept the Oscars, and it's so amazing and shocking to see that. But that doesn't necessarily mean that all the great roles that are offered in Hollywood are provided to Asian women. That's not the case. It has to be a specific character.

I choose projects based on the writing. To me, writing is everything. If it's well written, then there's high potential. You never ever know what's going to happen, because it could be about politics, it could be about the timing. You don't know how well something will do. But I think for me personally, the best gauge is the writing and the team and what they've done before and seeing if they make quality entertainment or if the story has meaning. It's so important to be a part of something to devote your time to something that contributes to society in one way or another. And that matters to me.

For our full interview with Jihae, listen to the Who Won the Week bonus episode below!

It's a fan thing
Join SYFY Insider to get access to exclusive videos and interviews, breaking news, sweepstakes, and more!
Sign Up for Free
All Posts About
Features
Podcast
TV
Altered Carbon
Interviews
Jihae
Who Won the Week
Related Stories

Who Won the Week Bonus: Back to the Future Day

Who Won the Week: The Twilight Zone with Paul F. Tompkins

Does 'Knock at the Cabin' have a twist? Shyamalan says it's 'a jury movie'

All the sci-fi TV shows that have been recently canceled

Meet the two nerdiest characters on SYFY’s ‘The Ark’