Mark Millar (Kick-Ass, Wanted) and Frank Quitely's (We3) Jupiter's Legacy, first published in 2013, is the latest creator-owned comic to get the live-action adaptation treatment. Coming to Netflix on May 7, the eight-episode first season of Jupiter's Legacy follows the offspring of superheroes trying to live up to the incredibly high standards set by their parents.

The show will mainly follow the first five issues of Millar and Quitely's Jupiter's Legacy saga (with bits of the prequel Jupiter's Circle sprinkled in) where we see two brothers' ideals of what superheroes should be doing with their powers clash. The fallout from this conflict falls on their children, who have thus far refused to step up. It's omnipotent boomers vs. swaddled millennials, and it is the first of many adaptations coming out of the Netflix and Millarworld deal. This Jupiter's Legacy primer will give you what you need to know heading in.

Jupiter's Legacy takes place across two different timelines, the first of which is in the late 1920s. As the Great Depression begins, Sheldon Sampson, his brother Walter, and their college classmates charter a boat to sail to an island he sees repeatedly in his dreams. Sheldon believes this island is the answer to his failings and holds a secret that can rescue all of America. What he is saying seems like the ravings of a madman, but his friends and family are willing to go along with this wild quest. Lucky for them, the mysterious island is exactly where Sheldon said it would be and they all return to the mainland in 1933 with unimaginable powers. 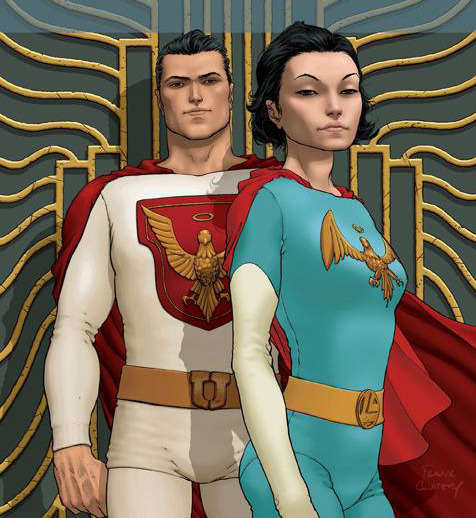 The other timeline is set in the present-day, and Sheldon, now known as the superhero Utopian, is the leader of a group of heroes called The Union who protect the Earth from threats and super villains that have emerged after that original voyage. Sheldon and Walter disagree with what they should be using their powers to do — as do the Union's children, who struggle with living up to the legacy their parents created.

Jupiter's Legacy was published in 2013 and is grounded in the real world, smack dab in the middle of President Obama's second term. The comic, Millar and Quitely's first collaboration since they partnered up for The Authority in 2001, is a new spin on the superhero genre, but it's also influenced by plenty of pop culture references such as King Kong and the 1950s and 1960s Golden Age era of comics, as well as the ideals from those times and how far America has strayed from those standards.

While the dynamics of the drama are seeded in ego and family dysfunction, there are far greater themes of socioeconomic differences, how effectively governments work and don't work for their people, and solutions that worked during the Great Depression not necessarily working during the Great Recession. It's not meant as a piece of propaganda, but the politics of the time do drive some of the motivations behind characters' actions.

Jupiter's Legacy is also about seeing one set of characters at different stages of their lives, where being young springs hope and faith in the system, but 100 years later with the next generation, those hopes are replaced with cynicism, discontent, and despair. How will this next generation mature, given that their young adult years and outlook are so vastly different?

There are eight episodes in this first season, which largely covers the first volume of the comic while greatly expanding on some parts of the story. We'll see if the series will draw a line as far as the violence goes, but it's rated TV-MA, so be prepared.

As previously stated, this is a family drama that is playing out on a super-powered stage. The trailer showed us that the cast is not only packed with talent but so many of the characters look as if Quitely's art grew out of the pages and into real life.

Sheldon Sampson/ The Utopian (Josh Duhamel) is the embodiment of the American Dream. He leads the superhero team called The Union and believes that superheroes need to hold themselves up to a high standard. But since he spent so much of his time saving the world with his vast array of powers — including super strength, speed, flight, and telekinesis — he was never around to be a father to his children.

Since he has decelerated aging, Utopian has helped America out of its darkest days, including the Great Depression, World War II, and Vietnam. But Sheldon also believes lines must be drawn and that superheroes must not interfere in the politics that put man on the paths to those tragic events. He's the one telling his peers to stay in their lane — and that doesn't sit well with some of them.

Grace Sampson / Lady Liberty (Leslie Bibb) is married to Sheldon and is also one of the planet's most powerful superheroes with a roster of powers that includes flight as well as superhuman speed, strength, stamina, and decelerated aging. While she is more nurturing than Sheldon, she too has not been around for her children when they needed her most.

Walter Sampson / Brain-Wave (Ben Daniels), meanwhile, has ideas on how to fix America's problems, but Sheldon has always told the world's most powerful telepath to let the politicians do what they're elected to do. He has trusted his brother for 90 years, but tensions are rising.

Brain-Wave has the ability to enter a person's mind through astral projection, and psychically disconnect them from what's happening to their physical body. The results are usually brutal for his enemies. He also shares many of his brother's superhuman powers of flight, speed, and strength, but with his added mental abilities, Walter is in many ways a bigger threat than Sheldon.

Chloe Sampson (Elena Kampouris) is Grace and Sheldon's daughter who has never fallen in line with the family business of being a defender of the country, but instead keeps a busy lifestyle building her brand as a socialite. Her brother Brandon Sampson / The Paragon (Andrew Horton) is attempting to follow in his father's footsteps, but it's clear that the two generations have different ideas about how things should be done. Though both untested and undeveloped, Chloe and Brandon possess many of the same powers their parents have and then some.

Eventually, Chloe enters a relationship with Hutch Hutchence (Ian Quinlan), a drug pusher with some superhero ties because he just so happens to be the son of George Hutchence / Skyfox (Matt Lanter), a founding Union member-turned-villain.

The first season of Jupiter's Legacy premieres on Netflix on May 7. There is a second volume of Jupiter's Legacy and a prequel series, Jupiter's Circle, that could be mined for additional seasons if they're ordered. And for those familiar with all of the comics, should know that the first issue of a new 12-issue story, Jupiter's Legacy: Requiem, is due out in comic shops on June 16.

Report: Jupiter’s Legacy beset with pitfalls before, during, and after production