You kids today have no idea how fortunate you are. So, before I boot you all off of my well-manicured lawn, let me explain how lucky all are.

In the old days, if a villain as cool as Kang the Conqueror had appeared in one of the 1970s live-action Marvel shows, we wouldn't have had the internet at our fingertips to get multiple analyses of who he was and what his possible schemes were. We had to trudge down to our local comics store and dig through long boxes to find the relevant issues with Kang appearances (let's not forget that if Kang would have showed up on say, The Incredible Hulk, he would have probably worn a tie-died bucket as a helmet and a purple cape).

But in this glorious present-day full of comic book goodness across multiple platforms? There is no shortage of options to get your Kang fix, after Jonathan Majors' jaw-dropping debut as He Who Remains in the final episode of season one of Loki.  Like this very column, where I have dug through the longboxes to curate a special list of comics that are recommended reads to help you get familiar with the MCU's new arch-villain — and maybe pick up some ideas on how Phase 4 will unfold.

Kang has always been an incredibly cool, if convoluted, adversary. Over the decades, his "man out of time" vibe has proven irresistible to a number of comics creators, who have subsequently retconned him into one of the most consequential figures in the Marvel Universe. Instead of just a villain intent on, well, you know… conquering… he’s become inextricably linked in some way or another to everyone from his arch-foes the Avengers to the Fantastic Four, Carol Danvers, and even the mutant Apocalypse. Kang matters in the comics, and his introduction in Loki does nothing to suggest he'll be any less consequential in the Marvel Cinematic Universe.

The introduction of variants to the MCU as well as the Multiversal War and the divergent timelines opens up the possibilities for Kevin Feige and Co. to get as wild and wooly with He Who Remains as the comics have been over the years — and trust me, that's a lotta wooly. Because Kang is absolutely the leader in the clubhouse for Marvel's most complicated and headache-inducing canon.

Aside from a conqueror, Kang has been the pharaoh Rama-Tut, the future time master Immortus, the Young Avenger Iron Lad, a guy who influenced the creation of the original android Human Torch, and even a descendant of Reed Richards AND Doctor Doom. As we said, it's complicated. SYFY WIRE has written about Kang's comic history before and so to avoid repetition, I've avoided the fine choices in that article. I've also focused on his encounters with the Avengers because those have been the most consequential and frankly best, stories involving Kang.

The ones I mention below not only offer key details in Kang's long history, but I suspect offer some useful hints for how Kang's story may unfold in the Marvel films. Concepts such as the Council of Kangs would make a lot of sense, given that in Loki, we learned there are many versions of Kang out there. His connection to Reed Richards would appear to make it inevitable that Kang crosses paths with Marvel's First Family when the FF finally makes its MCU debut. But there are other possibilities here, such as Marvel Studios finally getting to address perhaps the most infamous and embarrassing story in Avengers history.

Here is your Kang reading list, and we want to point out all the stories mentioned here are available in various collected editions and also digitally.

I'm a firm believer that if you want to learn about a character, you should always start at the beginning. And even though Kang's debut in Avengers #8 is rather pedestrian when compared to his later, much more convoluted appearances, it's still helpful to see the seeds planted for his eternal enmity with Earth's Mightiest Heroes. Stan Lee and Jack Kirby immediately establish who Kang is and his motives — he wants to take over Earth. He beats the Avengers in fairly short order, except for the Wasp. This story was fairly unusual in the early days of the Marvel Age, because Janet Van Dyne didn't play as pivotal a role in the storylines as she would years later. But it's the Wasp and Marvel's official teen sidekick Rick Jones who devises the plan to save the Avengers. Eventually, Kang is beaten and he jumps back in the time stream to lick his wounds. FYI, this back issue SOARED in value the moment the season finale of Loki ended as speculators jumped all over it. It is easily one of the hottest back issues in the collector's market, so if you want one, be prepared to pay top dollar.

One of the great trippy Avengers epics of the 1970s written by Steve Englehart, the king of trippy comics epics, this storyline lasted nearly a year. Kang showed up at Avengers Mansion seeking the woman known as the Celestial Madonna — "The perfect woman," basically — to have a child with.

This arc had major ramifications for the Avengers.

During this storyline, the Vision learned he was not created by Ultron as he once thought, but that his body once belonged to the android Human Torch. Kang also sparked the first encounter between the Vision and Wonder Man in Giant-Size Avengers #3, who had been brought back from the dead along with Baron Zemo, the original Torch, and Frankenstein's Monster (yes, really).

It was also the first story to feature Kang, his Egyptian past self Rama-Tut, and his future self Immortus together. Also, in Giant-Size Avengers #2, it featured the actual death of an Avenger, the Swordsman. He was killed saving Mantis by taking Kang's energy blast. Kang had a major impact on the Swordsman's story, as the villain viewed him with contempt and thought him a foe unworthy of his attention. With the character set to debut in the Disney+ series Hawkeye, there is yet another possible Kang connection to ponder.

FYI, the Celestial Madonna would turn out to be Mantis, who plays an entirely different role in the movies, but you never know. Maybe Kang will interact with the Guardians of the Galaxy in a way that allows his path to cross with Mantis'. The Celestial Madonna story has been reprinted several times, including this softcover trade. 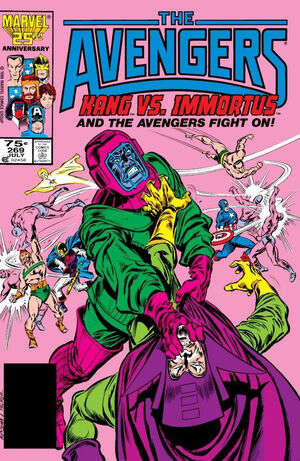 This classic trilogy introduced the "Council of Kangs" concept. Kang has never looked better than he did as he was drawn by the legendary duo of John Buscema and Tom Palmer. Writer Roger Stern had Kang on a mission to eliminate all the variants (back then they were just "duplicates") that had been created from all of his jaunts across the timeline. He takes the Avengers to Limbo where he tries to use them to help him kill the final Kang duplicate. The heroes beat the variant Kang, only to have Kang-Prime capture them.

The last Kang duplicate is killed, but before Kang-Prime can rejoice, Immortus appears — Limbo is, after all, his domain — and reveals to Kang that he is his future self. This pushes Kang over the edge and he disappears into Limbo.

The story is worth reading simply because it is great comics storytelling told by a creative team firing on all cylinders. But it's also important because it revealed who Immortus was. And it seems clear — at least it was to me — that the version of Kang we met at the end of Loki, "He Who Remains," was Immortus. Because that character essentially is the Time Keeper of the timeline in the Marvel Comics universe, someone who has used the same merciless tactics to protect time in comics as his MCU counterpart has. There is little doubt Immortus will be a player in Phase 4. As Jonathan Majors told Empire Magazine, the appeal of being able to play the same role in a variety of different ways — variant performances, if you will — is what apparently attracted him to playing Kang in the first place. Bet on Immortus being one of those versions.

Want to learn more about Alioth, the smoke creature guarding the Void in Loki?

Read this 1993 four-issue limited series. It's the follow-up to the Citizen Kang story, and while it's very 90s in the art style and its denseness, it's another cool Kang epic. Terminatrix is looking to expand Chronopolis, the future city that serves as Immortus/Kang's fortress of time-displaced solitude. Terminatrix also happens to be Ravonna, Kang's lady love. it features two teams of Avengers from across the timeline. Alioth was introduced in the first issue of this series, so it's an important touchstone in Kang's development, as well as highlighting his importance to the structure of time in the Marvel Universe.

IMHO, this monster storyline from 2001-2002 by Kurt Busiek, Alan Davis, Kieron Dwyer, Ivan Reis, and Manuel Garcia is the best Kang story ever. Why? A number of reasons, but one of the principal ones is because it actually proved that Kang the Conqueror wasn't just a name.

He captured Earth, wiped out Washington, D.C., and imprisoned most of the Avengers. The series is noteworthy for a number of subplots, including the resolution of the long-running Scarlet Witch-Wonder Man romance. It also alluded to Carol Danvers' troubled history with Kang's son Marcus (more on that in a bit). But the highlight of the entire arc is the climactic battle between Kang and Captain America. It is worth whatever price you pay for the single issues or trade paperback.

I'm including this infamous comic because Marvel Studios is really, really good at reading the room and knowing when and how to react. Remember how Avengers: Age of Ultron seemed to go out of its way to show how the Avengers and S.H.I.E.L.D. tried to help civilians avoid being collateral damage from the fight with the Ultrons? I always felt that was in direct response to the backlash Zack Snyder got for the wanton destruction in Man of Steel.

Avengers #200 caused near-irreparable damage to Carol Danvers when it was published. Somehow, Marvel editorial allowed a story in which Ms. Marvel was essentially raped by Marcus, and allowed to leave by her Avengers teammates. It's an awful story, which my colleague Sara Century went into more detail about here, and Chris Claremont felt strongly enough about it he wrote essentially a double-sized F-U to Marvel in Avengers Annual #10 in response.

But with Kang about to be front and center in Phase 4, it stands to reason his son Marcus may show up. And wouldn't it be nice to see him and Carol Danvers have some kind of story that allows Marvel's movie team to handle that relationship the way the comics should have, 40 years ago?

It's a fan thing
Join SYFY Insider to get access to exclusive videos and interviews, breaking news, sweepstakes, and more!
Sign Up for Free
All Posts About
Comics
Features
Behind the Panel
Kang the Conqueror
Marvel Cinematic Universe
loki
marvel comics
the Avengers
Related Stories