Silver Sable and the Wild Pack #36, written by Christa Faust, cover art by Mahmud A. Asrar

We here at FANGRRLS sure love a good comeuppance, and Silver Sable has dealt more than a few. Sable was initially a Spider-Man antagonist turned ally who was hired by J. Jonah Jameson to take Spider-Man out … permanently! but who grew to respect the wallcrawler after seeing him in action and realizing that he was actually a pretty decent guy. She declined the 1 million dollars JJJ paid her for the job and left him a flustered, sputtering mess as she returned the check, minus $75,000 for “expenses.” After her early adventures with the web-slinger, she was given her own solo title in 1992, which ran 35 issues before it and the character more or less vanished into comic book limbo.

There may have been other female-led comics around that time, but after examining several top 100 lists, we sure didn’t see any (some exceptions being found within ensemble groups such as WildC.A.T.S. and X-Men in which single issues would occasionally focus on a female character). This is to say, at the time of its premiere, Silver Sable was a drop of water in a desert. Let's take a look back on the good, the bad, and the silver-hued beauty that was the Silver Sable series.

This Is The Story Of A Girl Who Loved Punching Nazis

Sable is the leader of a gang of Nazi-hunting assassins called the Wild Pack, and if there is a thing that immediately puts a character on our collective good side, that would be it. She is part of a well-known family from the country known as Symkaria, a fictional land which borders Doctor Doom’s country of Latveria. These Eastern European countries were both plagued by famine and poverty, but their benevolently despotic rulers (we guess?) took responsibility for turning that around. In fact, Sable and Doom have a more or less polite working relationship with one another, and they have diplomatic dinners to discuss political affairs semi-regularly. It’s pretty cute, actually, and it gives us a glimpse of Sable’s surprising ability to navigate complicated relationships with men and women that might not always (or ever) fall on the side of justice in their actions.

Sable’s early life was relatively joyous, but she was forever traumatized when she saw her mother killed by her father’s enemies. Afterward, she took up training with him, vowing that she would continue to hunt Nazis and bring them to justice to her dying day. Sometimes “justice” definitely meant showing up in an elderly Nazi’s hospital room and taking them out while they were on their deathbeds (this happens! In a comic!) but regardless, it is clear to the reader that Sable is a woman who sets a goal and keeps it. While she did eventually begin the company Silver Sable International, taking on more for-profit jobs as a result, Nazi-hunting has always been her passion.

The Sable series opened with an annoyed Sable being forced to take on the responsibility of saving her niece from, you guessed it, Nazis. Hydra takes over the niece's school and Sable busts in, along with Spider-Man and the Sandman, and saves the day. She establishes her no-nonsense dynamic with her crew and insists that keeping business separate from emotions is the most important thing in the world, quietly revealing that both she and her father were guided by their passions and it got him killed. Underneath it all, Sable is some kind of big ol’ softie because she continues to sponsor her niece after the story ends.

She also had a few encounters with other major characters in Marvel like Daredevil and Deadpool throughout her adventures, but perhaps the most entertaining team-up begins in Issue 4 of her series, in which she goes to attend a dinner with Doctor Doom only to be attacked by his doppelganger. This story goes off the rails in a way that most ‘90s comics do, but it is well worth the time to read, and Sable wears the full Doctor Doom armor for much of the story. What can we say? Sable works great in a supervillain team-up.

Now, unfortunately, the whole series isn’t the instant classic it could have been. Particularly in the ‘90s, when men wrote solo stories about women, there was a strong tendency to not only fail to flesh out their emotional lives, but to use the story arc in some ways as a platform for misogynistic thought as expressed vicariously through other characters. For instance, in the first issue of Silver Sable, she is in the middle of a job focusing on very important and meticulous assassin work, but when Spider-Man shows up in the story, he immediately makes a crack about her hating men when she fails to focus on him. This trope certainly predates this story, and made several appearances in the Ms. Marvel series in the late ‘70s, when J. Jonah Jameson threw a barrage of sexist insults into the ether every time he and Carol were in a room together. It has survived to the modern age, making a significant appearance in Fearless Defenders thanks to an unnecessary segue in which many of the male heroes bemoan their misandry, focus on their sex appeal, and air their grievances on why the women are so cruel for not paying more attention to them. These asides are intended to be humorous, but your mileage is going to vary on that one.

Much of the humor in the Silver Sable series revolves around male characters commenting on Silver Sable, rating her compassion, beauty, and intelligence openly in her presence as she generally ignores them and focuses on her job. This is interesting because it implies that this is the appropriate response to what we would now acknowledge as gendered harassment. The implication is that Sable is heroic because she is capable of maintaining an impersonal distance from these criticisms and indeed much of the world around her. She is surrounded by men, from her peers to employees to the people that hire her to the people she is hired to take vengeance upon. There is no defining female friendship, and she tends to take on an adversarial stance against other women. In short, Sable is “not like other girls.”

These stereotypes weigh down the book, but it’s not all bad, and as evidenced above, the critique is far from specific to this series alone. The tough, no-nonsense persona was prevalent among characters of all genders at the time, as was the low-on-nuance, high-on-aggression action movie style of morality. As stated, there weren’t really any female-led books at this time to lay down the groundwork, and we certainly had to start somewhere. Not to mention, Sable is a genuinely intriguing character. Her complex backstory, her loyalty to her country, her strained diplomatic relationships with powerful men, and her ability to flippantly decline massive sums of money should she grow personally disinterested in the job are all the trademarks of an interesting character.

When her series was brought back for a single issue written by Christa Faust in 2017, the story revolved entirely around Sable making puns while beating up on Nazis, and it was a lot of fun. Perhaps going forward, the humorous and playful side of Sable deserves a greater focus because it was definitely what gave the Silver Sable and the Wild Pack series all its significant charm.

In the end, this was an interesting run that helped begin to break up the monotony of early ‘90s Marvel. There is a lot that will make modern readers cringe, but if anything, Silver Sable deserves recognition for opening doors for more female protagonists and woman-fronted books going forward. 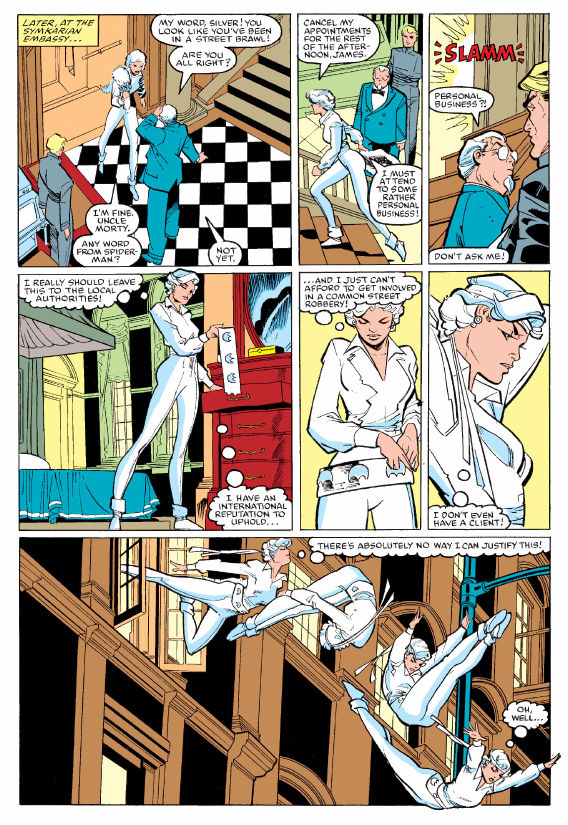