The Skywalker Saga continues, just not in the way you'd expect.

Remember that dude from Tennessee who was literally named Luke Sky Walker and got arrested last December? Well, it looks like his legal troubles aren't over, because a warrant was just issued for his arrest, per WKYC (an NBC affiliate station in Cleveland). Not only that, but OG Luke, Mark Hamill, is once again offering his two cents on the matter, with a tweet that pokes fun at the crime-committing man weilding the name of Hamill's iconic Star Wars character.

"The sequel nobody asked for and no one wants to see. #LarcenousLuke #TheSheriffStrikesBack," Hamill wrote, tweet-quoting the news article about the warrant for Walker's arrest, which was issued by a sheriff's office in Carter County, Tennessee. Walker, 22, is charged with property theft of more than $1,000 as part of the office's "Operation: Neighborhood Cleanup."

Sounds like somebody needs to take a trip to Dagobah, where Master Yoda can instill some discipline into him with some rigorous Jedi training. 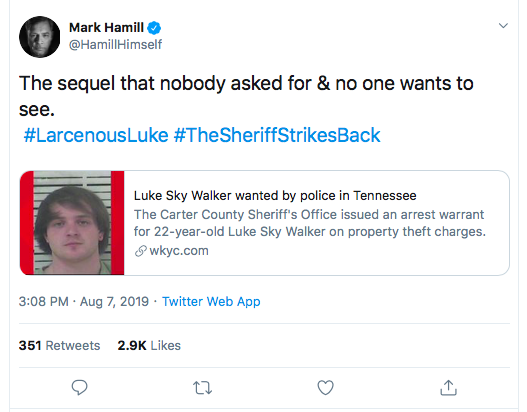 Hamill will reprise the role of Luke one last time in Episode IX: The Rise of Skywalker (out Dec. 20), where he'll appear as a Force Ghost. J.J. Abrams returns as director on the installment, which finally wraps up the story of Luke and Leia's family once and for all.

It's a fan thing
Join SYFY Insider to get access to exclusive videos and interviews, breaking news, sweepstakes, and more!
Sign Up for Free
All Posts About
Movies
News
Crime
Luke Skywalker
Mark Hamill
Star Wars
warrant
You May Also Like
Recommended by Zergnet
Latest on SYFY WIRE