From the moment it first appeared in the 2014 teaser trailer for Star Wars: The Force Awakens, Kylo Ren's lightsaber became one of the most talked-about Star Wars artifacts ever introduced to the franchise.

It was the first time we'd ever seen a lightsaber with a crossguard onscreen, which sparked plenty of debate among casual and diehard fans alike, but that wasn't the only reason the saber was so instantly iconic. Apart from the allure of the guy wielding it, the saber itself had a certain kinetic quality that other lightsabers just don't thanks to its crackling, unstable blade. Now, in the final issue of Marvel's The Rise of Kylo Ren miniseries, we get to see its origins.

**Spoilers for The Rise of Kylo Ren below**

We've known for years now that Kylo Ren's lightsaber crackles and sputters the way it does because the kyber crystal that powers its blade is unstable. The visual dictionary for Star Wars: The Rise of Skywalker even confirms that Kylo has the knowledge to repair his blade, but chooses not to because he likes the way it looks and sounds. What we didn't know before was exactly how and why the blade got that way in the first place.

The Rise of Kylo Ren #4 by writer Charles Soule and artist Will Sliney picks up with young Ben Solo having just joined the Knights of Ren in an effort to prove that he should be one of them, with a hunt for an artifact called the Mindsplinter (a nod to Splinter of the Mind's Eye) on Mimban. Throughout this miniseries, we've seen plenty of darkness and anger from Ben Solo, stoked by Snoke's influence, but we've also seen the young fallen Jedi's inherent kindness in the form of an unwillingness to hurt innocent people. The miniseries led off by revealing that the fire at the Jedi Temple and the resulting deaths of Luke Skywalker's students was not actually Ben Solo's doing. He was merely another witness to it who never bothered to correct the record, and even as two fellow students — Tai and Voe — pursue him in the wake of the Temple's fall, he refuses to kill them. He doesn't see them as the source of his problems.

Ben's reluctance to kill innocents doesn't exactly mesh with the philosophy of the Knights of Ren, though, and as their first mission together unfolds the leader of the Knights, simply called Ren, reminds young Solo of this while Ben is doing things like using mind tricks to get information rather than just inflicting pain. Even as he does this, he hears Snoke's voice in his head, reminding him that the Knights are fluid because they are not burdened by any real code other than the code of survival through taking whatever they want. When Tai and Voe arrive on Mimban, eager to stop Ben, Solo has a chance to prove himself by defeating his former friends.

In the ensuing battle, Tai duels with Ben while Voe tries to help the Mimban miners against the Knights. When Ben hesitates to kill Tai, Ren does it for him, and he taunts young Solo once again with the thought that he is perhaps not cut out for the Knights of Ren. The two men duel, and as both Snoke and Palpatine observe from the sidelines — and Leia and a young Rey sense Ben's fall to the Dark from afar — Ben Solo finally gives into his anger. In a moment of clarity, he pours his anger into his fight against Ren and kills him, giving the Knights the "good death" they demanded for his initation. Then, as the new Master of the Knights of Ren, he kills Voe. 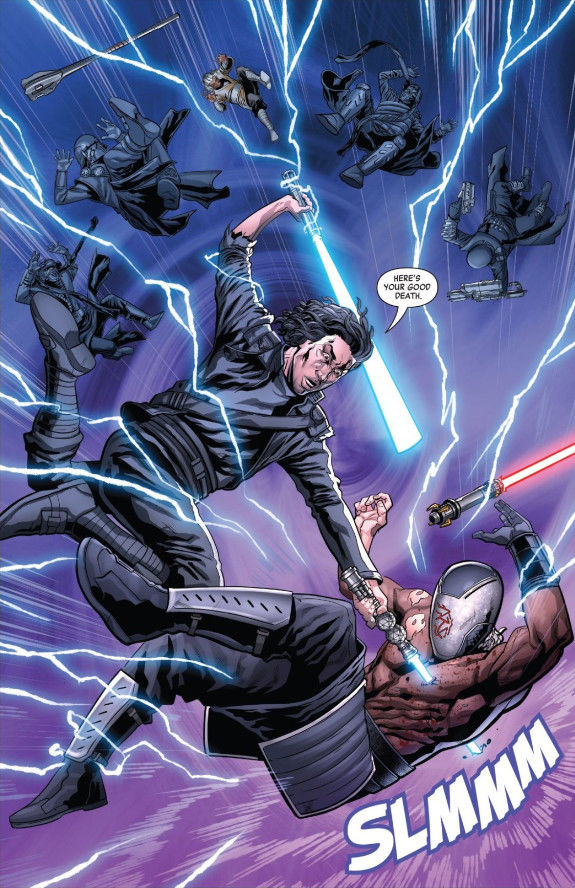 The issue closes with Kylo Ren alone in his quarters on the Knights' ship, the Night Buzzard, as he takes apart his old blue-bladed lightsaber. As the novel Ahsoka and the early issues of Soule's Darth Vader comic laid out previously, Sith lightsabers are red because the crystals are "bled" by the user. We saw Darth Vader do this in his early days as a Sith, and saw the temptation to go back to the Light as he poured his rage and his anger into the crystal in an effort to turn it red. When Kylo Ren attempts to bleed his crystal, he also feels temptation. He sees visions of his mother and father, his biological uncle Luke Skywalker and his chosen uncles Chewbacca and Lando Calrissian, and even the face of Voe. Still, he keeps pushing, pouring all of his rage into the crystal as he squeezes it in his hand. The power is so great that it shakes the Night Buzzard. And then, when he opens his hand, he finds a red, but cracked, kyber crystal there. 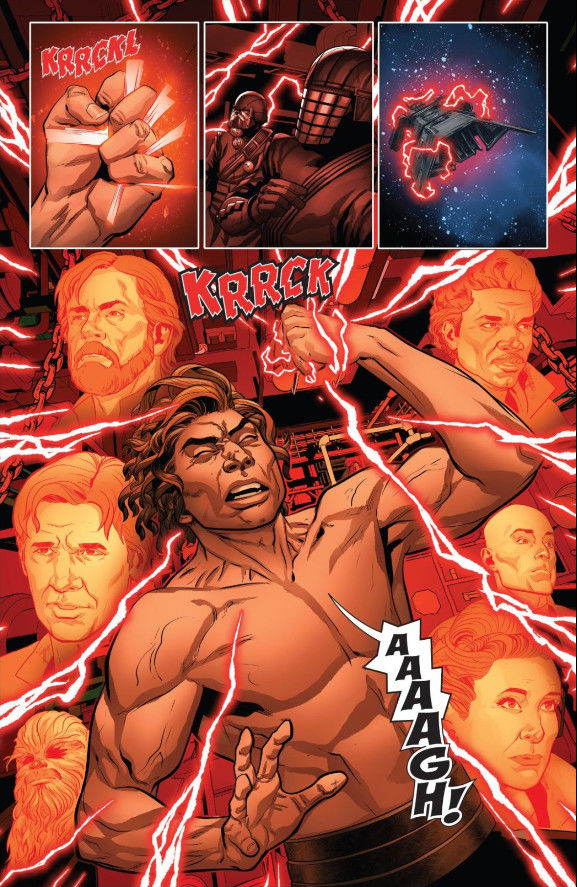 The resulting blade is so unstable that it burns Kylo's hand when he tries to ignite it as a single beam, so he makes modifications. That's why he ended up with the now-famous crossguard, to vent out the extra energy, but it's particularly interesting to note that he'd rather do that than just take another crystal and bleed it, perhaps because he didn't want to go through the temptation again.

It's also interesting, in retrospect, to see how all this happened in the context of what we now know about Ben Solo's final days. Rey and Leia always insisted that there was still Light left in him, and now we have a better idea of why. As cruel and homicidal as he may have been as Kylo Ren, Ben Solo's path to the Dark Side began with an act of resistance as he defied Ren's demand that he kill innocent people. Of course, he ends up doing that after his turn, but before that he insisted on doing things his own way, killing Ren instead of the miners of Mimban. In some ways, his rage seems to stem not just from his hatred of his place in the world, but from the expectation that he's supposed to be that cruel, that he has to live up to that agenda of slaughter. The fact that he goes along with it eventually despite his resistance only seems to stoke his crystal-shattering rage. It's a fascinating context for the birth of a villain, and sets the stage perfectly for his later redemption.

Chosen One of the Day: Kylo Ren's glistening torso beef