Marvel's Voices #1, a beautiful blend of essays and comics

One of my favorite pastimes is reading older comics. I love getting a snapshot of what was going on during the creation of earlier issues, especially the pages reserved for fanmail. That's usually where some of the more entertaining, informative, and often cringe-worthy bits are located. Comics and their readers go hand in hand, and fanmail is an opportunity to get an idea of who was reading a particular series and why. These moments also provided a chance for the creators to interact with their readers. While fanmail in the back of comics aren’t as popular as they once were 20 to 30 years ago, the Marvel’s Voices podcast/video series turned anthology comic reminded me of how beautifully connected fans and creators have always been when it comes to their shared love of this unique form of storytelling.

What makes Marvel’s Voices so unique is that it uses essays written by comic lovers, not only giving them space to share their relationships with comics but as an introduction to the anthology. This fanmail, so to speak, is mostly placed before the individual anthology stories. The essays don't live within the text itself but are referenced through a roadmap included in the issue. You can find the paired essays on Marvel's website (which is wonderful from an accessibility standpoint, with no purchase required). The roadmap shows readers how to pair the essays with each story. The different essays are all from people of color who love comics, and they blend perfectly with the distinctive collection of stories by creators of color in Marvel's Voices #1.

Marvel’s Voices #1 is a significant receipt for the importance of representation not just on the page but also having that same representation behind the page. Representation matters in writers, artists, editors, and readers. Hopefully, in 2020 it’s widely understood that comic fandoms aren’t just full of cishet white guys, but if not, Marvel’s Voices is here to remind everyone. The essayists all share their unique connection to Marvel comics — everything from their relationships to characters to how they see the links between characters and real-life heroes within their communities. These perspectives show how universal the love of comics is and how impactful they have the potential to be.

Essayist Regine Sawyer shares a story about how the misfortune of a classmate stealing some of her comic book cards subsequently created an ideal opportunity for a shared family experience between herself, her mom, and her older brother. The anthology story "Be No Evil" by artist Brian Stelfreeze goes perfectly with it. Similar to Regine’s mom in her story, Black Widow saves a young girl while shielding her from the violence Black Widow inflicts upon the girl's attackers. It ends with Black Widow asking the young girl to keep the fact that they jump from the building together a secret, a little action, as a treat. Regine’s mom, after finding out about her daughter’s love for comic book cards, helps her rebuild her card deck.

Essayist John Jennings focuses on the relationship between superheroes and those who have been othered in some way, mainly those from marginalized communities. He mentions how the importance of seeing one's self reflected in the culture they consume can be empowering, and to deny someone of that is to deny them of their personhood and their humanity. For people who are marginalized in this country, we often see bits of our own cultures infused into the mainstream, but often with the marginalized creators forgotten. It’s a frustrating feeling, and comics, like other forms of media, have been guilty of doing this exact thing. It's followed by the story "Souls Afire" by Evan Narcisse with art by Jahnoy Lindsey and Emilio Lopez, which beautifully reflects what Jennings' essay was about. Brother Voodoo monologues about where he comes from and how, when others see him, they’ll also see and learn of the ancestors who live through him.

“Assemble,” a story in Marvel’s Voices #1, written by artist Luciano Vecchio, also takes an opportunity to pay respects to real-life heroes. It's a celebration of the LGBTQIA characters in Marvel comics and Stonewall legends Marsha P. Johnson and Sylvia Riveria. 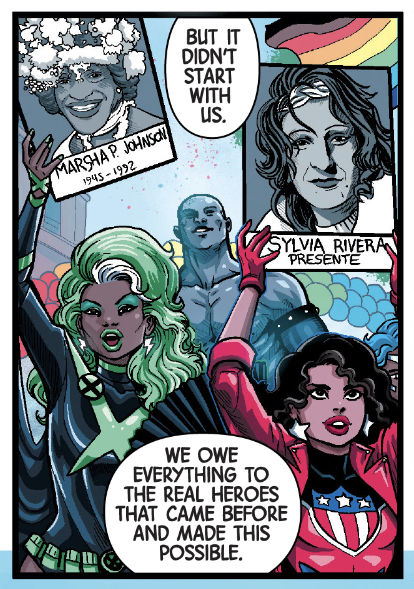 Marvel’s Voices #1 shows how far Marvel comics have come and how much further they can go if they continue to elevate the marginalized voices behind the pages. It's not enough to only have representation in the characters. The authentic views behind them must be present. The next generation of comic lovers deserves it, and it's essential to ensure this unique form of storytelling continues to serve its purpose.

Here are the unsung all stars of the 'Shrek' soundtrack

Obi-Wan Kenobi: here’s what Ewan McGregor had to practice up on