Two weeks ago, Marvel kicked off its War of the Realms event with a massive first issue that brought an invasion of Earth led by the Dark Elf Malekith. That lead-off chapter brought quite a bit of tragedy for the story's heroes, particularly its Asgardian characters. Sadly, things are only slightly better in the second issue.

**Warning: There are spoilers for War of the Realms #2 below.**

War of the Realms #1 began with Malekith sending Dark Elf assassins to take out the Allfather Odin, who seemed to have possibly perished under their blades. Things got worse when Malekith's full-scale invasion of Earth launched, targeting New York City and the Asgardian refugees living there under the leadership of Queen Freyja. To save his adoptive mother's life, Loki confronted his biological father King Laufey of Jotunheim. In retaliation, the Frost Giant devoured his own son as the fight continued to grow worse for the Asgardians and the Avengers.

Issue #2, by writer Jason Aaron and artist Russell Dauterman, picks up in the heat of fighting, when it seems all hope is lost. The Avengers are trying to teleport civilians out of the city by an means necessary, but Roxxon hackers led by Dario Agger have shut down their systems at Avengers Mountain, and Dark Elf sorcerers have restrained Doctor Strange from using magical means.

That's when Odin, gravely wounded but not dead, arrives with a host of Valkyries, and the fight finally gets a little more even. When Jane Foster discovers the sorcerers holding back Strange and takes them out, he is finally able to summon the magic necessary to open the portal to Avengers Mountain, but he's unable to control the spell. That means civilians are teleported out of the city...but so are The Avengers.

Earth's Mightiest Heroes, along with Asgardians Freyja and Sif, watch in horror as Valkyrie — meaning Brunnhilde, the original Marvel 616 superhero to carry the title — fights on in a nearly deserted New York City, slaughtering as many of Malekith's soldiers as she can. That's when Malekith sneaks up behind her, and Valkyrie falls. 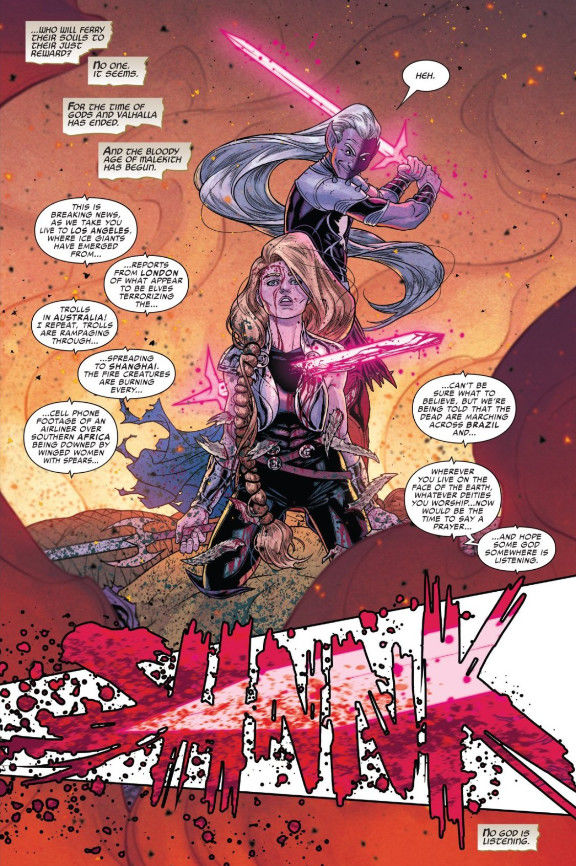 Meanwhile at Avengers Mountain, Odin retires to enter the Odinsleep and heal his wounds, and Freyja comes up with a daring plan: Journeying to Jotunheim to rescue Thor from the Frost Giants.

The idea behind War of the Realms is basically that every creature in Thor lore is fair game, and they're all converging on Earth for all-out war in a way they've never done before. That should mean Earth is getting shaken up, and it is — the absence of The Avengers means Malekith's armies are now moving beyond New York and into other major cities — but it also means the Asgardians are losing many of their own as they push to the front of the fighting.

Already we've seen Odin put out of commission, Loki and Valkyrie killed, and now Jane Foster named All-Mother among the refugees while Freyja goes in search of her son. And we're still just two issues in. What will remain of the Asgardian leadership structure by the time this is over?

Marvel’s M.O.D.O.K. canceled by Hulu after one season