Explorer Matthew Henson was the first man to reach the North Pole — and even if later experts think he and Robert Peary’s 1908 expedition didn’t actually make it to the geographic North Pole, Henson was still a world-class adventurer. A master at navigation who learned how to drive sled dogs and speak several local languages, Henson never enjoyed the same fame that Peary did in his lifetime, in no small part because he was a Black man in early 20th-century America. And yet Henson, who started his adventures when he ran away from home at age 12 to become a cabin boy, lived a life comparable to any of the great pulp explorers and heroes of old. That’s why author Gary Phillips, in the new book Matthew Henson and the Ice Temple of Harlem, turned Henson into a fictionalized version of the pulp adventurer he so embodied in real life.

Phillips, an award-winning genre writer best known for his crime novels, including the great Ivan Monk mystery series, got inspired while thinking about real-life figures like Wild Bill Hickok and Annie Oakley who became fictionalized. "I thought, 'Why don’t I do that with Matthew Henson?'" he tells SYFY WIRE. "What if I recast him as a kind of Indiana Jones/Doc Savage character, but set him against the Harlem Renaissance?"

The resulting book, Matthew Henson and the Ice Temple of Harlem, is an old-fashioned pulp novel that reimagines Henson the explorer as an adventurer living in Harlem in 1928. However, the story is a bit more grounded than most pulp tales, as Henson, as a character, is enmeshed in the reality of what was happening in Harlem at the time — and what it was like to be a Black man living in New York City during the Roaring Twenties.

"I started on an action note with Henson rescuing this woman because I wanted to give the readers some sense of who the characters are and their environment, but you also want to say, ‘I’m giving you a pulp novel and I’m going to hook you from the beginning.’ So there’s this crazy action piece where he comes through the window and Tommy guns are blazing and he’s using shurikens, throwing stars,” Phillips says.

“Then I ease it down so when they’re in the cab I mention Marcus Garvey and the Negro Improvement Association, because they were things that existed then and elements that make up Henson’s environment,” Phillips continues. “I tried to say, 'I’m going to take these crazy fantastic elements, but there’s this reality going on, and then by contrast, make those elements even more outlandish and crazy.'"

“Being a Black writer writing about a Black character, I can’t help but ground him in a certain reality,” Phillips says. “Yes, it’s a fantastic story, but I want to bring some verisimilitude to the tale.”

“The knock against the old pulps was that they were too much removed from the realities of the day,” Phillips says. “That was a conscious effort, of course, by the editors because they wanted to keep the readership and entertain people." It's similar to the kind of questions writers and editors are considering today, Phillips says, after the police killing of George Floyd: How do you write police officers? How do you write police interactions with Black citizens? "How do you portray these characters — especially a Black pulp character — at a time when Jim Crow and very overt racism existed?" he asks. "You’re compelled to not be heavy-handed but to incorporate that reality because otherwise, it’s unreal. It rings false.”

The Harlem that Phillips created, which is inhabited by other real-life figures like Dutch Schultz and Queen St. Claire and Bessie Coleman, feels true to the time, but there’s still a real sense of excitement and adventure — which is befitting both the pulpy roots and Henson’s actual life story.

Phillips describes Henson’s life as hard and his childhood as Dickensian. “His mom died and something happened to his dad and he and his sisters wound up living with the cruel stepmother. At 12, he went to Baltimore to the docks and signed on as a cabin boy. The older white captain took the young man under his arm, taught him the sextant and navigation, and gave him the classics to read. I thought, ‘That’s like a Doc Savage upbringing.’ Doc was raised to fight evil, and Matthew isn’t so much that, but in my version has seen the world: had the North Pole experience, and is now in Harlem,” Phillips explains. 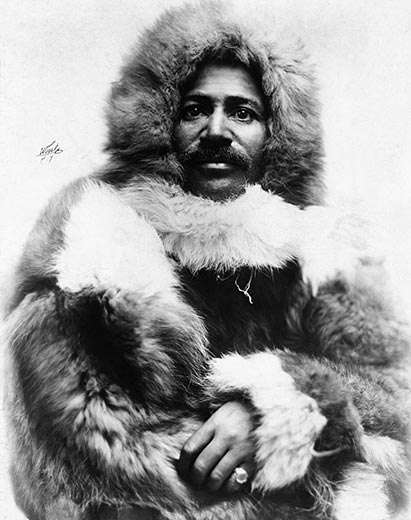 “In the real world, he died pretty much in obscurity, though he was known in Harlem. In the world I create for him, he’s not known in the bigger white world, but he’s a star in Harlem,” Phillips continues. “He has a radio show, he’s an adventurer for hire, and part-owner of this diner. He has some means. He is not a millionaire playboy. I wanted to keep it within the realms of realism.”

Staying within the realms of realism, though, still gave Phillips a lot of room for classic pulpy, fantastical-sounding details. Nikola Tesla and some of his inventions appear in the book, but there are other aspects of Henson’s story that are astounding in their own right — and ripe for a little exaggeration. “He and Peary brought back three meteorites. I created a fourth one,” Phillips explains. They saw that the Inuits had iron tools but there were no iron deposits that far north. Because Henson could speak several Inuit tongues, they found a meteorite that they figured crashed about 10,000  years past and they brought them back, which helped to fund expeditions. There was real stuff to extrapolate from. It wasn’t so crazy that some of it didn’t exist.”

What The Ice Temple of Harlem does so well is give a sense of lived history, conveyed through the characters. "You do your best to not have exposition — and if you do have exposition, you’ve got to try to hide it as best you can,” Phillips says. “It is trying to figure out these shared experiences that people are aware of, but as a reader, you’re outside of that. You have to give readers some sense that when these characters talk, you know what they’re talking about, but you don’t want to be obvious and on the nose."

In his novel, Phillips has characters reference the destruction of Black Wall Street, which the Watchmen TV show brought to attention recently, and the Red Summer of 1919, and does so in ways that feel related to Phillips' treatment of Henson, an unsung hero, whom the history books overlooked. “Black soldiers who returned from World War I and went, 'We fought for freedom overseas, we should have freedom at home.' They were subsequently murdered and lynched for daring to demand equal rights. That’s a reality that doesn’t get talked about a lot,” Phillips says, speaking of the background and tension that underlie so many of the book’s events and experiences of its characters. “You can’t help but call on that past, which we’ve now come to repeat in some fashion.”

Matthew Henson and the Ice Temple of Harlem is out now from Agora Books.