Missed opportunity: Why aren't comics being sold in movie theaters?

The just-announced April release of Black Widow #1 by writer Kelly Thompson and artist Elena Casagrande is well-timed, since the character's first solo movie outing, Black Widow, opens May 1. If you've seen Casagrande's artwork on the underrated comic Vigilante: Southland, you should be excited to see her tackle the Widow's Spy-Fi milieu. It's great that fans who only know the Widow from her MCU adventures will have a fresh jump-on point in the comics. And yes, Red Guardian and fellow Black Widow Yelena Belova (played in the film by David Harbour and Florence Pugh, respectively) will be in the comic, too. All of that is great news, because judging by the trailer, fans are going to fall hard for both characters.

Now, imagine if that first issue was made available in the same place where a slew of potential new Black Widow readers will be the first weekend in May? Imagine if a comic book aimed at capitalizing on a character's theatrical spotlight was actually for sale at movie theaters.

It seems comically obvious (pun intended), doesn't it? But despite comic book movies being the reigning King Genre of Hollywood, comics are not being sold at the multiplex with any regularity. Talk about a missed opportunity. I'm no marketing guy but for the life of me I'll never understand how every theater chain in America showing Avengers: Endgame didn't have a stack of Infinity Gauntlet TPBs for sale at the concession stand. The time to hook fans of the Marvel Cinematic Universe and get them to try the source material was right there. How many fans walked out of the movie theater and wondered, "How do I read whatever THAT came from?"

We'll never know, but I know I had several children of friends call me after Endgame to ask me about the comics that inspired the movie. I sent them to my LCS, which I'm happy to do. I'm sure most people reading this column know about the continuing struggles comic book stores face to stay in business, despite comic book characters being such dominant pop culture players.

Converting fans of comic book movies into readers of Marvel, DC and Image comics is the white whale for publishers. So why hasn't this particular avenue been pursued more aggressively? Movie theater concessions are all about impulse buys, like candy, soda and popcorn. At my local AMC multiplex, they have ballcaps, Funko POP figures and other knick-knacks related to current movie franchises. Why don't I see comics and graphic novels occupying the same shelf space?

If I were part of DC's team, I'd have done everything possible to get collections of Gail Simone's Birds of Prey tenure, or Harley Quinn trades right next to the Twizzlers, Swedish Fish and nasty Raisinets when the Birds of Prey movie arrives on Feb. 7. Who doesn't think a collection of Morbius-related stories could maybe move a few copies in theaters when that movie arrives later this year? Could it possibly hurt?

I'm not saying it's a guaranteed sales success, but theaters provide a captive audience members who just bought a ticket to step into a world born on the page. Even a movie like Joker, which isn't directly based on a specific comics story, could have been used to introduce theatergoers to memorable story arcs like A Death in the Family or stand-alones like Alan Moore and Brian Bolland's The Killing Joke or Brian Azzarello/Lee Bermejo's Joker GN. Give the fans a chance to sample the goods.

The reprint program for Marvel/DC is a big part of their publishing strategy. Why not start curating affordable softcover collections that provide a character's memorable stories for newbie readers? It's easy to do for a Spider-Man or Batman. They are countless GNs that would be appealing gateway offerings for brand names like that. But it could work for Black Widow just as well. 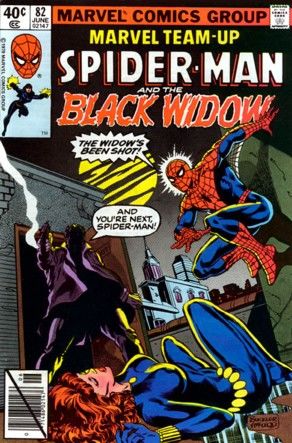 Reprint modern-day stories like "The Itsy Bitsy Spider" from Devin Grayson, Greg Rucka, J.G. Jones and Scott Hampton, along with some classic Widow tales. For example, take the multi-part story from Marvel Team-Up #82-85, where Natasha loses her memory and falls in love with Spider-Man. It's a Bronze Age gem featuring a ton of Marvel supporting characters like Nick Fury, Shang-Chi and the Silver Samurai that shows her in all her butt-kicking glory. You want access to new readers? They're right there. You just have to give them something to buy.

I'm certain there are roadblocks and complications to striking distribution deals with theaters. I get it. As I said, I'm not a marketing guy and won't pretend to know the particulars. But this I do know: We're neck deep in the era of Peak Comic Book Movie. So why aren't comics being sold at the place where comic book heroes rule?

I'm always interested in hearing what people think of the column. Find me on Twitter/Instagram/Facebook and let me know. Tell me what you're reading these days, too.

Behind the Panel is a video and audio series, as well. Our video series is chock-full of my in-depth interviews with amazing comic book creators. The Behind the Panel podcast is an audio documentary series that provides unique insight into your favorite creators and stories. Check 'em out, we think you'll enjoy them.