It's not hard to appreciate the rich and mesmerizing lore and worlds of Dungeons & Dragons and Magic: The Gathering. These games are always changing, adapting, and bringing new stories, characters, and mechanizations to our tables. The people involved in that are plentiful, but who is it that actually writes these stories? Who creates these towns, characters, and plots?

Well, behind the magic, there's a woman who wanted to be a playwright and ended up writing new stories she's not even allowed to talk about for some of the biggest tabletop games in the world.

"Playwriting is about telling stories about sad people in living rooms. I still tell the same stories as I did back then, but now I tell stories about sad sorcerers in living rooms," Alison Luhrs tells SYFY WIRE. Luhrs, a senior narrative designer at Wizards of the Coast, the company that produces Dungeons & Dragons as well as Magic: The Gathering, works to make sure the universes in which these games operate make sense. She designs worlds, storylines, and characters that are surrounded by adventure and magic at every turn. Frankly, it's kind of a dream job, especially for someone who grew up on games and writing their own stories.

Luhrs always loved stories and games. She grew up playing everything from chess to Mahjong with her family, spending Christmas break on her Gamecube endlessly playing The Legend of Zelda: The Wind Waker with her brother, and finally making her way to D&D and Magic in college with friends. The stories and gameplay of these adventures struck a chord with her and would unknowingly set her down the path she is on today.

"I had no idea this kind of career even existed when I was in school," she says. "I wish I had a time machine to go back to myself in theatre school and tell her she was actually learning how to make games the whole time."

"I love games because of the stories they tell and the experience I have sharing them with others," Luhrs explains. It was those experiences that guided her toward studying playwriting in college. After graduation, she hustled in the theater world and dabbled in social media as her day job. She secured a job doing social at Wizards of the Coast, and that's where it all began.

"As soon as I learned there were people in the building who were paid to write stories about dragons and elves, I thought to myself, '… well, I already know how to do that.'"

She advocated for herself at Wizards consistently, proving she had the talent and imagination to help create for one of the world's biggest creative properties. During her third year at the company, she moved down to Magic's Research and Development to work on creative text for the tabletop game.

While at Magic R&D, she wrote stories for the Amonkhet and Ixalan blocks and created or had a major hand in developing characters like Teysa, Yahenni, Vraska, and Jace. "My proudest accomplishment at Wizards has definitely been my work on that last character," she recalls. "Someone on Tumblr recently got a tattoo of Jace's symbol and I openly wept in joy at my desk for a solid ten minutes."

Her work started to gain attention elsewhere in the company, and eventually Luhrs became a full-time narrative designer for Wizard's digital products. 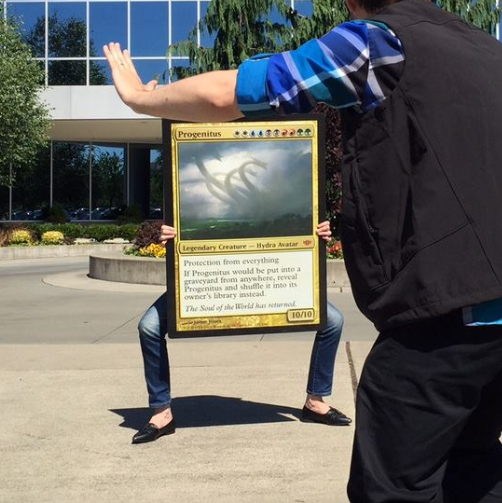 The role of a narrative designer is, in Luhr's words, "to advocate for a story." The human connection is what draws people to these games. If there were no larger narrative, sure, people would probably still play, but the idea of a story uniting all of the gameplay changes everything. "A story is what allows an emotional connection in addition to an intellectual or kinesthetic one," she says.

Every day that starts with actually playing the games she writes for. Yes, she gets to start her Monday morning playing D&D or Magic. However, there's a method and reason to it; they're looking for inconsistencies, to see how the story plays out, how characters interact in the world, and that everything actually matches up with what's already established in the Wizards franchise.

"The time I treasure is when I get to work on a long-term project and write," she says. "The documents I am typically working on are World Guides and creative conceits as well as proofs of concept for new pitches or ideas. A big chunk of my job is also advocating narrative to our executives, so I'm usually working on a couple of PowerPoint decks at once that help evangelize narrative and storytelling concepts."

What are these narratives and concepts? Well, she can't tell us. A maddening but vital part of the industry to keep things under lock and key for the best user experience down the road.

Luhrs also has a major hand in developing the storylines and characters that players read and see, including occasionally getting to write in-game dialogue. "I work closely with the creative director and leads to make sure that the narrative is well integrated with all our creative verticals — from audio to visual to UI."

Her advice for those wanting to get into narrative design? "Aim with an elephant gun, not a pistol." The world of game making is vast, and she says that too many hopefuls focus on one company or one game. The chances of scoring that dream gig from the get-go are incredibly slim, and people need to work their way up, or at least cast a wider net to gain experience and understand the industry.

"I knew I wanted to tell stories, so I took every gig I could that would help get me closer to that goal," she says. "Each job was progressively more narrative-focused, and when I had an opportunity to nail the target, I was already standing there with an elephant gun. Aim for the idea of your favorite job — not one specific gig."

Also, DM-ing totally counts as experience on your resume.

It's a fan thing
Join SYFY Insider to get access to exclusive videos and interviews, breaking news, sweepstakes, and more!
Sign Up for Free
All Posts About
Features
Games
Dungeons & Dragons
Interviews
Magic: The Gathering
Nerdy Jobs
wizards of the coast
Related Stories