If you ever wondered what you’d get if you merged a shark and a dinosaur, you’re looking at it. Ulughbegsaurus uzbekistanensis is that dinosaur. Recently discovered in Uzbekistan, this apex predator was a carchadontosaurid, which literally translates to “shark-tooth lizard”. It was a killer 23-foot theropod that weighed at least a ton and ripped the flesh off its prey with nine-inch teeth that could rival any shark. Ulughbegasaurus out-hunted the predecessors of T. rex around 90 million years ago, before the so-called king of the dinosaurs ever existed.

What is especially remarkable about this find is that a team of researchers led by paleontologist Kohei Tanaka, of the University of Tsukuba in Japan, were able to prove they had unearthed a previously undiscovered genus and species of carchadontosaurid with a single fossilized maxilla (upper jawbone). They recently published a study in Royal Society Open Science.

“We found four diagnostic features on the maxilla,” Tanaka said. “These features, such as bony bumps and wrinkles, are unique in this dinosaur, and thus we were able to give it a new genus and species.”

Carchadontosaurids first appeared on the supercontinent Gondwana in the late Jurassic and roamed the prehistoric Earth through the Cretaceous. They finally vanished on Laurasia, which is now what we know of as North America, Europe, Greenland, and parts of Asia north of the Himalayas, about 89 million years ago. They could grow to monstrous sizes of up to 6 tons. While tyrannosaurids evolved into even more enormous beasts later on, Ulughbegsaurus was the thing to fear if you were a sauropod that was trying to avoid being eaten back then. 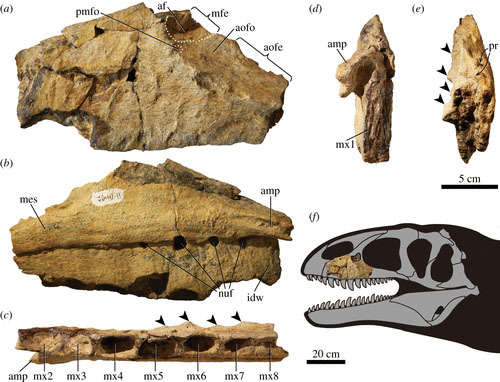 While it didn’t have to compete with the iconic T. rex, the other predators Ulughbegasaurus had to beat out for food were things like Spinosaurus and Ceratosaurus, which were just about as fierce when they smelled blood. Carchadontosaurids were allosaurids — and just to give you an idea of what some allosaurids would do for a meal, other species are known for having cannibalized each other when food was scarce. Tyrannosaurids were on the rise but hadn’t taken over yet. Tanaka could also infer how large Ulughbegsaurus was from that same maxilla.

“We compared the size of the maxilla to that of other carchadontosaurid species whose  body sizes are known,” he said. “We estimated 7.5-8 meters in length for Ulughbegsaurus, although this is a rough estimate.”

So if Ulughbegasaurus and other carchadontosaurids were in charge, how did their downfall, which had nothing to do with that asteroid, happen? They were doing alright when they were keeping tyrannosaurids well below apex predator level. There is even one formation in which evidence of this was found. Another formation revealed additional evidence for these types of dinosaurs coexisting during a time when the ancestors of T. rex hadn’t made it to the top of the food chain yet. It was way too early for the star of Jurassic Park to show up and eat everything.

Tanaka and his team believe that carchadontosaurids probably started fading out as tyrannosaurids evolved from pests that got in the way of hunting to tyrannical (as their name suggests) nemeses. The problem is that the transition is not well understood, because not many deposits or theropod fossils from that epoch have been found. It is possible that some of the fossilized teeth in the Bissetky Formation, where Ulughbegasaurus was found, may have belonged to either others of its species or other carchadontosaurids.

If we really want to find out what happened to dinosaurs like Ulughbegasaurus, which was one of the last surviving carchadontosaurids, more remains of reptiles like it have to show up.

“In order to understand the extinction of carcharodontosaurs in Northern Hemisphere and gigantism of tyrannosauroids, we need more evidence,” Tanaka said. “the transition should have occurred after that, but exactly when is still unknown.”

It's a fan thing
Join SYFY Insider to get access to exclusive videos and interviews, breaking news, sweepstakes, and more!
Sign Up for Free
All Posts About
News
Science
Science
dinosaurs
Related Stories